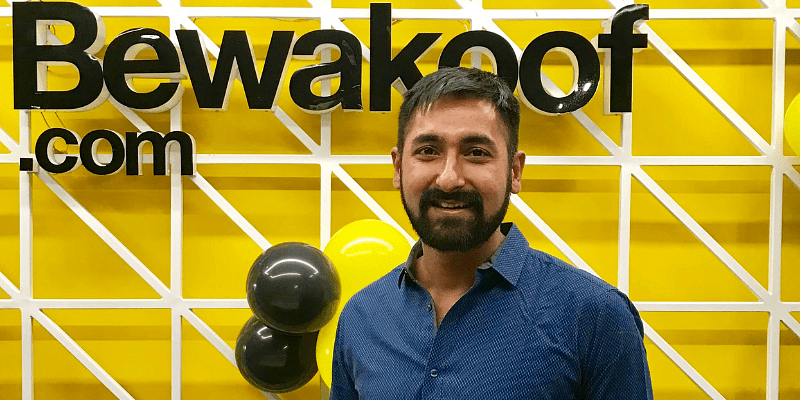 The COVID-19 pandemic continues to have a deep impact on the global economy but many businesses have shown the resilience to wade through this crisis. Bewakoof, a direct to consumer (D2C) fashion brand startup, has displayed its mettle to stand on its feet again.

Founded in 2012 by two IITians Prabhkiran Singh and Siddharth Munot, Bewakoof is a youth-oriented online fashion brand. In FY20, the startup registered a revenue of Rs 200 crore. But, it saw its revenues come down to zero when the nationwide lockdown was announced last March.

Recalling those days, Prabhkiran, CEO of Bewakoof, says, “As fashion came under the non-essential category, we came down to zero revenue and there was no certainty when things would open up.”

As a result, the startup began to look at how they could survive and thrive in these very challenging times.

For Prabhkiran, it was time to draw up a plan based on certain assumptions.

One thing this startup was certain that lockdown restrictions were unlikely to be lifted very soon. They assumed that the lockdown regulations would be present at least for three months.

In a pleasant surprise, Bewakoof saw traffic coming back its site but there was a difference as customers were looking for something else. Hence, the startup decided to start focusing on goods that were needed during the lockdown period.

“There was a big scarcity of face masks and we converted our manufacturing line to make these products,” says Prabhkiran.

Besides face masks, it also introduced other products like sanitisers that were in much demand during the early days of the pandemic. Bewakoof also started selling its products to other businesses.

Prabhkiran says, “Within two months, we started generating a business of Rs 10 crore, which took care of our cash flow issues and paying the salaries of our employees.”

This led to Bewakoof giving a hard look at its business model and finding innovative ways to emerge stronger from this crisis.

Prior to COVID-19, the startup had a 100 percent in-house manufacturing facility. But it started to outsource its manufacturing. Today, 50 percent of this activity comes from third-party players. Similarly, it created warehouse facilities outside of its headquarters in Mumbai and now has a presence in New Delhi and Bengaluru with plans to open Northeast India.

Secondly, it started to hire senior talent from outside, people who had worked with larger companies. Bewakoof also decided to shift its entire technology team to Bengaluru as it realised that it will provide them an edge in the days to come.

However, what was crucial for Bewakoof was customer behaviour and how it changed due to the pandemic. Prabhkiran says, “We saw a lot of shift towards online and knew that it will sustain. So, we decided to make investments for the long term.”

These included manufacturing apparel products that were more in demand during the lockdown like pyjamas, boxers, shorts, t-shirts, etc. Bewakoof also introduced a customer loyalty programme with an upfront fee of Rs 599 for a year.

As Bewakoof started getting the customer traffic back on its site to around four lakh users a day, it decided to expand its portfolio and began onboarding other third-party brands on to its site.

“We focused on new-age kind of apparel sellers that included microentrepreneurs who were not able to leverage an online presence. Now, our consumers are able to get differentiated products that were relatable to them, which also strengthened our brand of self-expression,” says Prabhkiran.

Back to pre-COVID-19 level

At present, Bewakoof is on a much stable ground as traffic on its site has reached pre-COVID-19 levels and the startup has started to reaping dividends on the changes it made. Around 20 percent of its revenue comes from its customer loyalty programme while the third-party brands contribute around four percent of its top line.

Though, Prabhkiran says, it is unlikely to touch the revenue of FY20 as they lost a couple of months in the current financial year and may close at around Rs 150 crore for FY21.

“For FY22, we are chasing a revenue of Rs 300 crore as we have set the foundation for rapid growth,” he adds.

Bewakoof has been in this market for eight years and was able to survive despite the presence of formidable online fashion brands like Myntra, Amazon, and Ajio. The founder attributes this to the startup’s differentiation in the online world.

The founder says Bewakoof learnt a lot during the pandemic as many of changes it bought about — like outsourcing manufacturing, shifting of technology team or onboarding third-party sellers — were unthinkable during normal times.

“We have done much more than what we have done in the last five years. We overestimate the time and effort required for innovation. That is one lesson I will carry about these times,” says Prabhkiran.

WinZO partners with Kalaari Capital to launch Gaming Lab; to co-invest in gaming