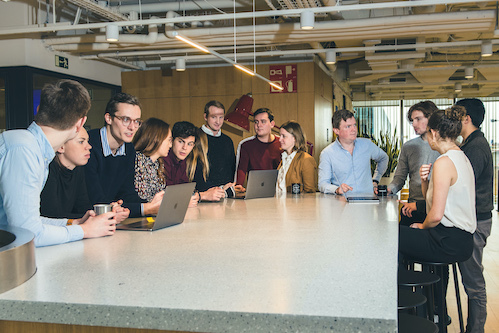 Leveraging networks of “experts” online started out as a very manual online business. But it’s rapidly becoming more efficient as machine learning is applied to the whole business model. Indeed, in the U.K. alone $60 billion is spent a year on using outside expertise. Large players in this space include GLG, Third Bridge, Guidepoint and AlphaSights. And we saw recently that proSapient has raised $18 million for its SaaS platform for managing expert networks.

The three-year old startup claims it has seen a 7x growth YoY and now has offices in Barcelona and New York. It’s also appointed Pau Beltran at CTO, who was formerly of Disney, eDreams, OneMind and others.

Arbolus’ approach to “enterprise knowledge,” as it’s known, is employing natural language processing and an AI backbone to its platform.

Whereas proSapient uses technology to make expert sourcing more efficient, Arbolus captures recordings of expert interviews, transcribes them on its platform and then shares that knowledge within companies’ networks that subscribe to the platform.

Companies using the platform pay fees to actually use the software, and use all of the toolsets that are on there. It also makes transaction fees when companies pay independent experts on its platform.

Sam Glasswell, CEO and co-founder of Arbolus, said in a statement: “Having the right information gives you a competitive edge but the typical means of engaging with experts through one-hour calls alone is failing to deliver value. These interviews are usually held by a single department and their findings end up lost in PowerPoint presentations or reports. Therefore, companies are only building up a short-term view. We are bringing innovation to the ways companies are working with external experts by using groundbreaking technology to, not just build expertise within organizations, but deliver it in ways that are digestible, searchable and, most importantly, usable for the months and years ahead across different departments.”

Mark Pearson, managing partner from Fuel Ventures, added: “Arbolus have done amazing things in its first 24 months and it’s a testament to the entrepreneurial ambition of Sam and Will backed up by their experience of helping to scale a $1 billion company in their former lives.”

Arbolus says it is working with more than 80 customers, including Big Four firms such as KPMG, and startups like UiPath.

Founders Sam Glasswell and Will Leeming scaled an expert agency before this startup and realized a lot of knowledge was being lost in these expert networks because it simply wasn’t being captured in the right way. And they decided to base the company in Barcelona because it was able to attract talent and had all the advantages of being in the EU.

Glasswell told me: “In Barcelona we have an awesome office, our own space, a great team it’s certainly a beautiful city, and we’re able to attract really really top talent. I mean, people will move from anywhere in the world to go to Barcelona. It’s probably been one of the biggest success factors for us so far. Does the EU factor, help? Yes, I mean the fact that is in the EU in the trading bloc of the union does help… and we thought we’d just be able to build a much more culturally diverse team in the long run.”

Certainly, the future of work looks like it is shifting toward one where outside experts are used more and more by companies. If the gig economy has affected your pizza delivery, it’s also affecting the knowledge economy.

Spending on big data, analytics by Indian enterprises to touch $2B in 2021: IDC