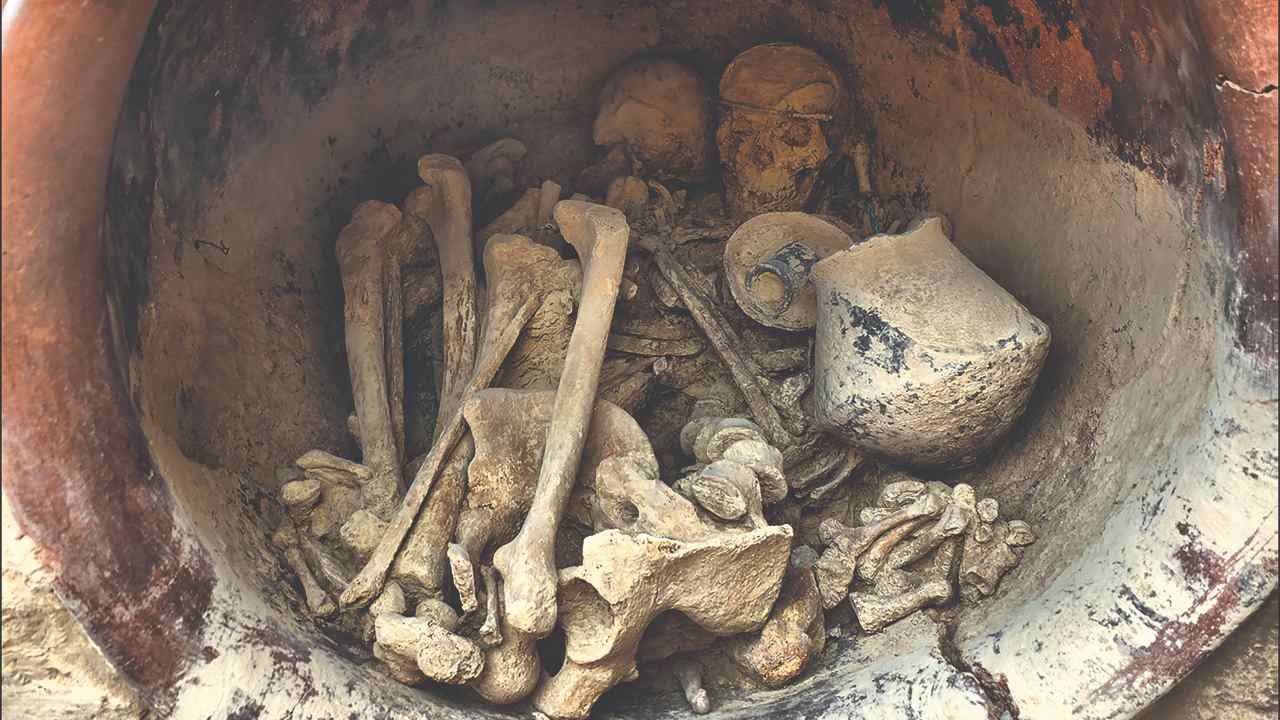 About 3,700 years ago, a man and a woman were buried together in the southeast of the Iberian Peninsula. Their tomb was an ovoid jar beneath the floor of a grand hall in an expansive hilltop complex known as La Almoloya, in what is now Murcia, Spain. It’s one of many archaeological sites associated with the El Argar culture of the Early Bronze Age that controlled an area about the size of Belgium from 2,200 BC to 1,500 BC. Judging by the 29 high-value objects in the tomb, described Thursday in the journal Antiquity, the couple appear to have been members of the Argaric upper class. And the woman may have been the more important of the two, raising questions for archaeologists about who wielded power among the Argarics, and adding more evidence to a debate about the role of women in prehistoric Europe.

She died in her 20s, possibly of tuberculosis, and had been placed on her back with her legs bent toward the man. In life, she had a range of congenital anomalies such as a shortened, fused spine and a stunted left thumb.

On and around her were sublime silver emblems of wealth and power. Her hair had been fastened with silver spirals, and her silver earlobe plugs — one larger than the other — had silver spirals looped through them. A silver bracelet was near her elbow, and a silver ring was still on her finger. Silver embellished the diamond-shaped ceramic pot near her, and triple plates of silver embellished her oak-wood awl — a symbol of womanhood.

Her most fantastic silver artifact is an impeccably crafted diadem — a headband-like crown — that still rested on her head. Only six have been discovered in Argaric graves.

She would have shimmered in life. “Imagine the diadem with a disc going down to the tip of her nose,” said Cristina Rihuete Herrada, an archaeologist and professor of prehistory at the Autonomous University of Barcelona, and one of the discoverers of the burial. “It’s shining. You could actually see yourself in the disc. Framing the eyes of that woman, it would be a very, very impressive thing to see. And the ability of somebody to be reflected — their face in another face — would have been something shocking.”

The sound of her would have been dramatic too: “Think about the noise — this clink clink clink, because it’s silver against silver in these very large earlobes,” Dr. Rihuete Herrada said. “That would make for a remarkable person.”

The man, who was in his 30s when he died, had been interred with his own fineries, including flared gold plugs in his ears. The silver ring that had once been on his finger had fallen off and lay near his lower back. By his side was a copper dagger fitted with four silver rivets.

Like their contemporaries — such as the Minoans of Crete, the Wessex of Britain and the Unetice of Central Europe — the Argarics had the hallmarks of a state society, with a ruling bureaucracy, geopolitical boundaries, complex settlement systems and urban centers with monumental structures. They had divisions of labor and class distinctions that persisted after death, based on the wide disparity of grave goods discovered at archaeological sites.

And while most of these systems have long been considered deeply patriarchal, the double burial at La Almoloya and other Argaric graves are making archaeologists reconsider life in ancient Iberia. Was she the one wielding the power? Was she a symbol of power but held none of her own? Did they share power or wield it in different realms?

They were buried beneath the floor of a great hall, where long benches lined the walls, and a podium stood before a hearth meant for warmth and light, not cooking. The space was big enough to hold about 50 people. “There have been hundreds of El Argar buildings excavated, and this one is unique. It’s quite clearly a building specialized in politics,” Dr. Rihuete Herrada said. The couple had at least one child together — an infant discovered buried beneath a nearby building was a genetic match to both of them.

In the El Argar culture, girls were given grave goods at an earlier age than boys were, indicating they were considered women before boys were considered men. Diadems are exclusively found with women, and their graves hold a richer variety of valuable goods. Some male elite warriors were buried with swords.

As for the power structure the two occupied, Dr Rihuete Herrada suggests that perhaps they held potency in different realms. The swords could suggest “that enforcement of government decisions will be in the hands of men. Maybe women were political rulers, but not alone,” she said.

She suggests that perhaps the Argarics were similar to the matrilineal Haudenosaunee (known also as the Iroquois), with women holding political and decision-making power — including over matters of chiefdom, war and justice — but men being in control of the military.

These intriguing ideas fit into an emerging body of research from various archaeological studies in Europe that are re-examining female power during the Bronze Age.

“The fact that most of the grave goods, including all of those made of silver, were associated with the female clearly points to an individual that was considered highly important,” said Karin Frei, a research professor in archaeometry at the National Museum of Denmark. “It makes sense to raise the question of whether a class-based state society could be ruled by women.”

Dr. Frei is the director of Tales of Bronze Age People, which uses methods such as biogeochemical and biomolecular analyses to study the remains from both elite and commoner burials in Denmark. “In several parts of Bronze Age Europe, females might have played a much bigger role in political and/or long-distance networks than previously thought,” she said.

Joanna Bruck, an expert in the Bronze Age of Britain and Ireland and head of the School of Archaeology at University College Dublin, says that the assumption that elite women of this era were “bartered brides,” exchanged as objects in networks of male power, is ripe for reconsideration.

The burial at La Almoloya “provides such clear evidence that women could hold special political power in the past,” Dr. Bruck said. “I think we’ve got to be open to the possibility that they wielded power and agency. Of course, power is a really complex thing. You can have power in some contexts but not in others. We shouldn’t think of power being something that you have or don’t have.”