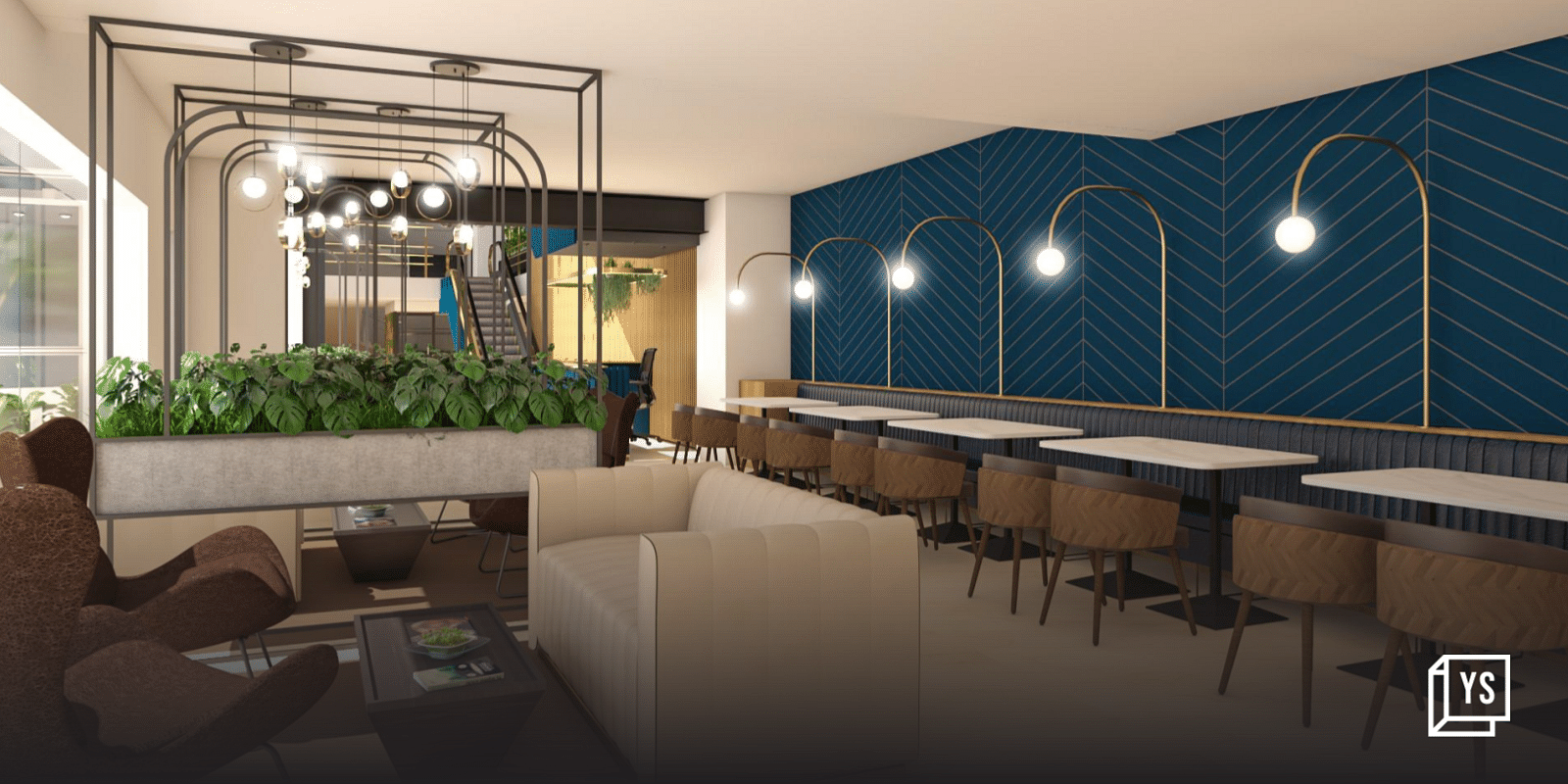 After lying vacant for nearly two years, co-working and flexible work spaces are back in action. The demand for flexi work spaces is on the rise post pandemic, with several companies, including large enterprises and startups, increasingly realising the need to provide hybrid work options to employees. There is a rise in demand not only from top cities but also from Tier II and III cities across the country.

Driven by factors such as reverse migration, focus on retaining talent across regions, cost of living, and infrastructural push by state governments, Tier II markets and certain Tier III cities are poised to witness a significant upswing in hybrid workplaces. This has led providers of flexi spaces to look at ramping up their service.

According to a JLL-Awfis survey, the demand for co-working spaces is likely to surge in the coming years in Tier II cities such as Ahmedabad, Indore, Jaipur, Kochi, Bhubaneswar, Chandigarh, and Lucknow.

Flexi spaces are also cropping up in cities like Coimbatore, Madurai, Thiruvananthapuram, Visakhapatnam, Vijayawada, and Gulbarga.

Data from the JLL- Awfis report titled ‘Flex your Workplace’, released in December 2021, show that 48% of respondents/occupiers who have a presence in Tier II cities want to expand here. About 78% of these occupiers are expected to expand within the next one year.

“While 75% of the flex portfolio is still in Tier I cities, the hybrid model is fostering the growth of flex operators in Tier II cities as well. We expect demand for flex spaces to continue to rise in the metros, and Tier II cities will also witness tremendous growth,” says Radha Dhir, CEO and Country Head, India, Jones Lang LaSalle, a real estate services firm.

“The demand surge is courtesy startups and the IT and service sector, along with large enterprises and MNCs, who are partnering with co-working spaces for their workspace needs,” says Amit Ramani, Founder and CEO of Awfis, a Delhi-based flexi workspace provider.

Flexibility is the key

The emergence of flexi spaces is primarily due to the fact that companies are offering employees flexible working options that give them the liberty to opt for the work environment of their choice.

Companies are realising that blanket imposition of the work-from-office mandate or banning work-from-home will not work in the new normal where employees seek freedom, flexibility and choice. They believe allowing employees to choose the work environment that suits them best will have a positive impact on their work, productivity, creativity, work-life balance, and career progression.

Earlier this month, Wingify, a software company based in Delhi, introduced a flexible work policy wherein employees can decide to operate from a co-working space of their choice, wherever and whenever they want.

An internal survey indicated that its employees want flexibility in choosing how, when, and where they could work and collaborate.

To enable this flexibility, Wingify has partnered with GoFloaters, a platform that helps find work spaces, to obtain access to over 800 co-working spaces across India. Of these, over 160 spaces are in Tier II and III cities, including Ahmedabad, Bhuvaneshwar, Chandigarh, Coimbatore, Gurugram, Noida, Ghaziabad, Goa, Indore, Kochi, Lucknow, Madurai, Mysore, Pune, Trichy, Visakhapatnam, and Vijayawada.

Wingify is present in 65 cities in India and more than half of its employees are based out of Tier II and III cities.

Sparsh Gupta, Co-founder and CEO, Wingify, says, “We have come a long way since going fully remote in 2020. In the process, we’ve learned that there are times when one needs to collaborate, discuss, or just meet and engage with people. There are days when one needs a more focused, distraction-free work environment. Keeping this in mind, we are enabling all Wingifighters across India to work from a physical office space whenever they wish.”

Nference, a US and Bengaluru-based AI-driven health technology company, recently established a satellite office in Coimbatore. It took up space at a coworking centre in the city in order to shift to a hybrid work model. This, the company says, has helped break the monotony of working alone from home. It has also helped teams meet in person and collaborate as and when needed.

Interestingly, the co-working spaces are not concentrated in just city centres or major employment hubs, but they are also spread across different areas, including housing-intense suburbs. According to Anuj Puri, Chairman, ANAROCK Group, a real estate service company, setting up shop in residential areas helps companies remain closer to their employees.

The pandemic-induced lockdown saw people migrating from Tier I cities to their hometowns in hordes. This resulted in a distributed workforce, with a large part of the employees now based out of Tier II/III cities. This reverse migration has pushed the demand for flexi spaces in smaller cities to cater to the employees here.

The flexible workspace model helps in employee retention, which is the need of the hour, according to Umesh Uttamchandani, Co-founder and Chief Growth officer, DevX Coworking.

Allowing employees to work near home reduces the burden of travel and helps employees have greater control over their schedules and work conditions, leading to increased output and job satisfaction, ultimately contributing to employee retention.

With flexible office spaces, companies can plug and play at a lower cost compared to the cost of office layouts and fit-outs. The lock-in period for a regular office space is 3 years to 4 years, while co-working spaces can be rented out on a monthly, daily, or hourly basis. Users of co-working/flexi spaces have to pay only for the seats booked. These spaces also help reduce operational costs such as decor and furniture, power supply, internet services, janitor, access and security.

The cost of living in Tier II/III cities is lower than Tier I cities, leading to a significant cost advantage for companies operating in the smaller markets.

Rishi Sreedharan, CEO and Co-founder of Hyphen, a Bengaluru-based experiential-living-cum co-working community, says the company has seen interest from its enterprise partners who recently received grants and sops from the governments of Kerala and Karnataka. These sops are in the form of tax holidays, free office space, mentoring, and incubation opportunities in exchange for setting up branches in Thiruvananthapuram (in Kerala) and Gulbarga (in Karnataka) and hiring from these cities.

In response to the market demand, flexi space operators are expanding their offering in smaller cities.

Awfis plans to add spaces in markets such as Lucknow, Coimbatore, Bhubaneswar, Jaipur, Indore, Kochi and Nagpur, as it looks to set up 200 centres in 18 cities by the end of 2022.

Awfis’ current portfolio is in the ratio of 85:15 split between metro and non-metro cities. It aims to increase its non-metro footprint by 2023.

Gujarat’s co-working space startup DevX recently expanded its footprint to Chandigarh and Indore. It aims to cross 25,000 seats by next year from 11,500 seats currently. At least 50% of this growth will be in Tier II and III cities.

Noida-based Akasa Coworking plans to expand to Bhubaneswar by this year-end and add space in other Tier II/III cities, says Aditya Mehta, CEO and Co-founder of Akasa.

Rishi Das, Co-founder of Bengaluru-based IndiQube, a flexi space provider, says it had a very good response when it forayed into Coimbatore, its first Tier II city, in January 2022.

“The property with a size of over 1 lakh sq ft was fully occupied in quick time. We thus realised that there is a significant demand in Tier II and III markets for a good quality workspace product.” It has since then expanded its footprint to Madurai, Kochi and Jaipur.

IndiQube’s centres in Tier II cities have a seating capacity of 1,000-2,000 seats each. The startup says it provides a “consistent experience” to all clients. It leverages technology (via a community app) to ensure users across all cities can book meeting rooms, order food, avail themselves of airport transfers, and participate in events.

“With favourable policies, burgeoning infrastructure, and an enhanced quality of life, Tier II cities present a significant opportunity that is yet to be tapped on a large scale. We plan to have over 15 Tier II cities in our portfolio by next year,” says Meghna Agarwal, Co-founder, IndiQube.

Noida-based Smartworks aims to expand from 7 million sq ft to 10 million sq ft in FY22-23 and grow its presence in a few Tier II cities. It signed up clients like Accenture, Delhivery, Groww, Zomato and CueMath in recent months and some of them want to enter Tier II cities.

US-based Venture X recently entered India with two centres in Gurugram, with 1200 seats spread across 45,000 sq ft and 16,500 sq ft spaces. It plans to expand across India in all major Tier I and II cities.

“We have invested around $5 million in the Indian market and plan to invest $2 million to $3 million by 2023,” says Anil Lakra, India Partner, Venture X.

By 2030, India is poised to be the third largest economy in the world, creating many growth engines. This is expected to bring Tier II and III cities under the spotlight.

According to a report by property consultant CBRE, the flexible space stock in India is expected to cross 80 million sq ft by 2025 from 47 million sq ft currently. A large part of this will be driven by expansion in Tier II/III cities.

As flexible working becomes the future, smaller cities will look to grab the opportunity and make themselves more attractive to enterprises and service providers.

BharatPe board removes Ashneer Grover as founder, employee and director