The ONGC fund will own 8.65% of shareholding in the startup after the deal is completed

Chakr Innovation was founded in 2016 by Kushagra Srivastava, Arpit Dhupar, and Bharti Singhla 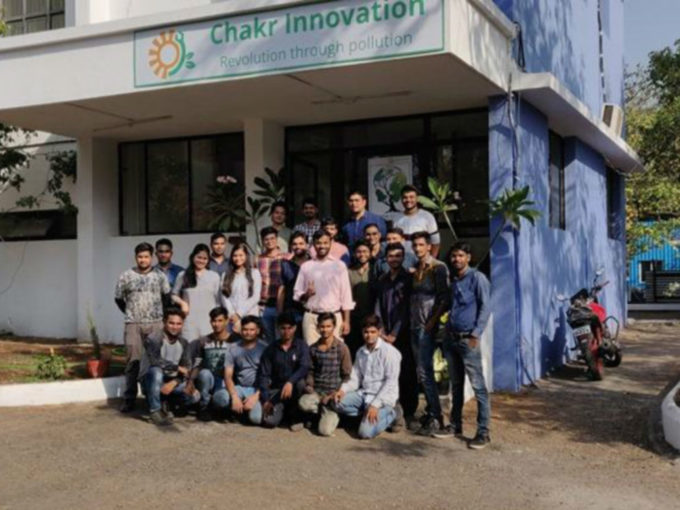 As per filings, accessed by Inc42, ONGC will be allotted 592 compulsory convertible preference  shares (CCPS) at a premium of INR 33,683.78. The fund will get 8.65% stake in the company, up from 5.38% which it had acquired in previous rounds of funding.

Soot particles are smaller than dust and mold particles and enter human lungs. As per an NCBI study, soot can lead to several diseases and even potential fatalities among children and adults. The startup’s Chakr Shield claims to collect 90% of particulate matter emissions from the exhaust of diesel generators without causing any adverse impact on the diesel engine. The collected emissions are used to create the ink.

The problem is huge in India — as per a study by IQAir, India is home to 22 of the world’s 30 most polluted cities. While Delhi was named the most polluted capital in the world, Noida, Ghaziabad, Meerut, Agra, Faridabad, and Dharuhera among other cities adjacent to the national capital found its place in the lists. According to a report by ReportLinker, the global clean energy technologies market is expected to reach $452.8 Bn by 2027 growing at a CAGR of 6.9% during the period of 2020-2027.

In its previous funding round, Chakr had raised INR 19 Cr led by Indian Angel Network along with Jyoti Sagar and IDFC Parampara fund in 2019. Prior to this round, the startup had raised an undisclosed amount in Pre-Series A funding. ONGC, which is the largest crude oil and natural gas company in India, launched a INR 100 Cr startup fund in 2016 to invest in startups in the oil and gas sector. As part of this push, last month, the fund invested in Delhi-based online diesel delivery platform Pepfuels.

While the corporate sector dominates the energy and power industry, startups are looking to innovate and solve problems in the mass market as well. The recent push by Reliance towards ‘new energy’ is also expected to bring in more attention to the sector.

Greenjoules, which raised $4.5 Mn in June this year, utilises non-food and non-feed wastes to manufacture biofuel, which is then used for commercial operations. Green energy and alternative fuels are the biggest focus areas for cleantech companies in India.

India’s largest renewable energy producer in terms of generation capacity, cleantech unicorn ReNew Power can generate up to 8 GW of power and has assets across 16 states in India. Startups such as Cleanmax, Log9 Materials, Zunroof, Oorjan, ION Energy, Gegadyne and others are also looking to introduce new portable power solutions to power the next-generation of electric vehicles with clean energy.

At present, India’s EV market is dominated by two-wheelers and three-wheelers.  According to a ICRA’s report, EV penetration in India will be driven by electric two-wheelers and three- wheelers. The report suggests two-wheelers to account for 8-10% of the total EV sales whereas over 30% of the three-wheelers will be battery-powered by FY25. Ather, Ola Electric, Okinawa, Bounce, Revolt, and TVS, among others are looking to drive transition of the market towards EVs.

Similarly, a number of cleantech companies have emerged in the past few years and they are working with mega corporations as well as government agencies to reduce the reliance on fossil fuel or other non-clean energy sources.

Investors are bullish on the sector too. Masayoshi Son-led SoftBank is looking to raise up to $750 Mn for SBG Cleantech, a joint venture (JV) between SoftBank, India’s Bharti Enterprises and Taiwan’s Foxconn. In June, impact investor and entrepreneur Harsha Moily launched a $200 Mn venture fund that will invest in sustainable agriculture, green buildings, energy storage and alternative energy in India.

Apart from the startup ecosystem, the central government is also working towards reducing greenhouse emission.  Under the National Solar Mission, the government has set a target of achieving 175 gigawatts of installed renewable energy capacity by the end of 2022. It is to be noted that of the 175 GW, the government is planning to generate 40 gigawatts of energy from solar rooftops and 60 GW from wind energy.

What’s a Social CRM … and How Can It Help Your Business Grow?