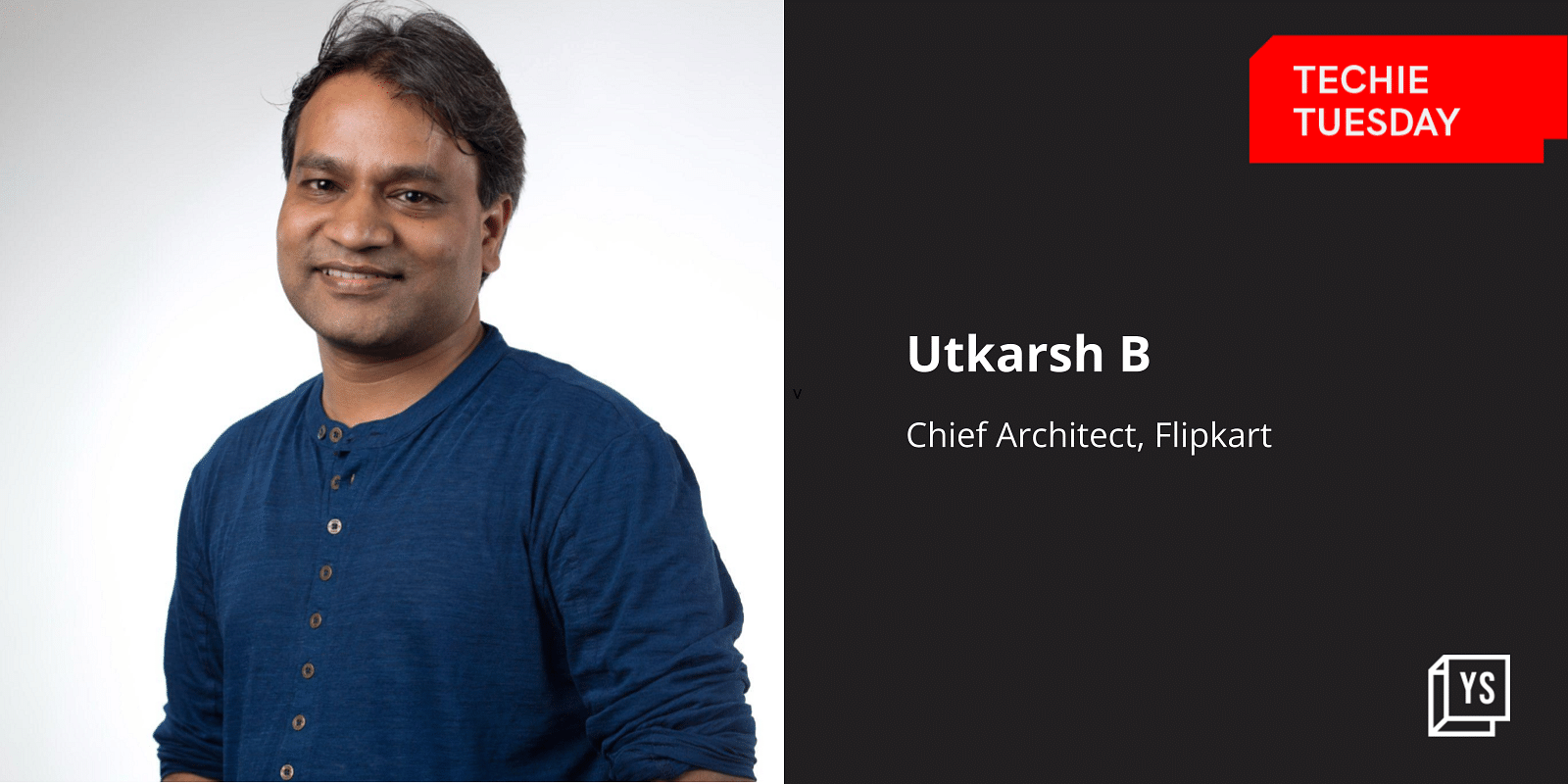 The first Chief Architect of Flipkart, Utkarsh B, equates his 12-year stint at the ecommerce giant to being in a university.

Onboarded as a Senior Technical Lead in December 2010, Utkarsh has been among the earliest recruits to look at the data science structures at the company and has witnessed the transition of Flipkart from a startup to a Walmart-owned entity.

Looking back at his early days in the company, Utkarsh recalls how founders Sachin Bansal and Binny Bansal were a part of his interview as well as the discussions he had with then Chief Technology Officer, Amod Malviya, on building an ecosystem for the future.

Starting with a team of three, Utkarsh first created central building blocks to scale Flipkart into a complete ecosystem play.

“This was probably the first manifestation of the central platform team and charter in Flipkart, around 2010-11 timeframe,” he tells YourStory.

“We invested in our central data platform for big data processing and a couple of our engineers molded themselves to be data scientists. In fact, the first two data scientists in Flipkart were engineers first,” Utkarsh adds.

From building a team of data scientists, who would look at the central building blocks of the ecosystem play for Flipkart, to creating a robust system that could cater to the ever-growing number of online shoppers, Utkarsh has been instrumental in the company’s success.

The thing about startups

In a career spanning over two decades, Utkarsh has spent considerable time working at startups. After graduating in Computer Sciences from IIT Kanpur, he joined a startup called Webtek Software in 2001. What fascinated him was the ownership and trust the company placed in him during his internship.

“I was working with about 20-25 people and it exposed me to real-world problem statements in an internship of just three months. That stuck with me for a long time and when I came back, I was blessed to work with one of the best bosses, Abhijit Sharma. I worked with him across four startups,” he adds.

What attracted him to Flipkart too was the conviction of the founders and the vision of the developers and architects at the organisation.

“The startup mindset is what I thrive in. When I was talking to Flipkart folks, it was an opportunity to mutually assess one another and it met all the proxies, being a nimble, agile and aspirational company,” says Utkarsh, adding that he was employee number 32 when he joined. He had previously worked with Amazon India.

From setting up the data team for Flipkart to witnessing the highs and lows of the Big Billion Day sale, Utkarsh has had a ringside view of the company’s growth.

Big Billion Day sale is the annual flagship sale event started by Flipkart in 2014 for a day on October 6, with a target of getting a billion hits on the website. In its current avatar, the sale event almost stretches over a week.

“When Sachin (Bansal) announced the first Big Billion Day sale, it was unheard of in the Indian sub-continent. We did not have precedence to it and went with certain half-baked predictive insights as to what skills do we need to prep our technology platforms and had to scale our ability to 25X for the event,” says Utkarsh.

He adds that once the real event ended, it made the team question the resilience of the platform.

“That one year taught us a lot in the preparation phase as well as when things grow. One of the systems that broke during the sale event was my team’s responsibility and the recovery took 40 minutes. It was like open-heart surgery,” says Utkarsh, adding that the learning made them leapfrog multiple decades.

The Chief Architect says that since his appointment to the role, which was formalised in 2019, the company started committing a third of its resourcing budget to tech excellence, which includes continuously upgrading the platform, investing in architecture building blocks and other tech-led innovation.

Since his experience with the first Big Billion Day sale, Utkarsh and his team also do an annual recon of the blueprint of the platform, usually post the sale event. “It started between 2014 and 16 when most of the complexities started coming into the platform. We started thinking about future concepts such as grocery, hyperlocal strategy and so on,” he says.

Utkarsh adds that the blueprinting helps the platform take a look at the tech debt incurred during the year and how to get back on track to invest in the right index sessions.

Going ahead, Utkarsh says that his team is trying to build a platform for a diverse customer base, which has probably not experienced a digital ecommerce set up yet, and ways to make Flipkart more contextual and relevant.

“Obviously will have an important role to play in helping contextualise the journey, deciding the experience for the end-consumer, and other aspects,” he says.

He adds that the company will continue to build and invest in technology play which makes the platform relatable to the end consumer, whether it is a local interface, camera integration, AR/VR integration for certain categories, or other experiences.

Amazon unveils plans to hire 55,000 people in corporate, tech, and other roles