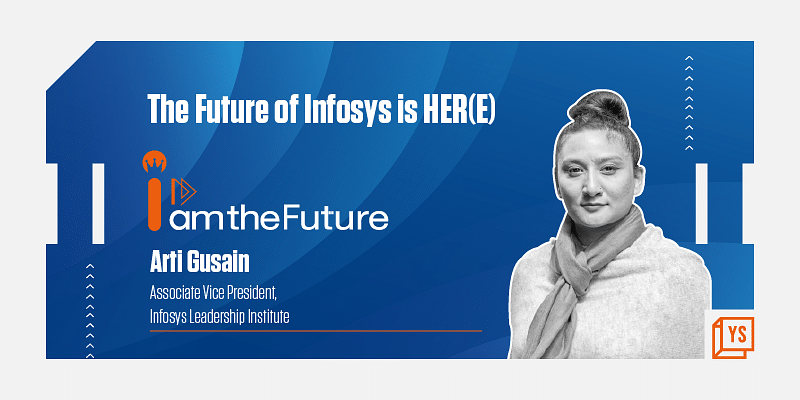 Curious, authentic, and a champion – that’s how Arti Gusain, Associate Vice President, Infosys Leadership Institute, likes to describe herself as she reveals details about her personality. A cheerleader for her team and for other leaders at Infosys, Arti receives the same support from her team and family members.

From being a tomboy and considering herself a novice, to now being recognised as a role model in the corporate field, Arti has come a long way. Over the years, she realised the importance of embracing and celebrating one’s uniqueness.

YourStory caught up with the changemaker to know more about her milestones, learnings, and what has shaped her personality, under its ‘I am the future’ series that spotlights dynamic and successful women leaders at Infosys.

Learning to be independent

Growing up with “strict” parents, Arti remembers how they motivated her and her siblings to break boundaries and find their own way..

From misfit to a two decade-long corporate career

As the “only” girl growing up in a family full of boys, Arti was quite influenced by them and considers them to be her strongest allies till date. She regarded herself as a “misfit” back then because she could neither fit in with the boys or the girls. Several life experiences helped Arti to understand the true meaning of diversity and inclusion, one that she is using even today, as she interacts with diverse teams and business leaders, as part of the growing ecosystem.

From being a rebel, she transitioned into a field that is focused on connecting with people. Arti ventured into the corporate field in the early 2000s, and worked with reputed names such as Convergys, Sapient, and Symantec, before starting her journey with Infosys. “It was an easy choice to make,” says Arti, adding that it fit right in with her career aspirations.

“It’s very important in my work to understand the business and build relationships. One of the things that I love is the passion and legacy in the system, and the drive and ambition of the organisation. That resonates with me, and connects well with my own value and energy system,” she adds.

Navigating challenges, one step a time

In the initial days of her career, Arti worked her way up in the absence of mentors, even though she wishes she had that guidance available. Adopting a “I will figure it out” approach, she climbed the ladder fast, but decided to “pause and re-prioritise her goals” due to an emotionally challenging phase in her life.

“To slow down my speed was one of my biggest challenges,” she shares, adding that it’s important for individuals to understand the value of realigning their energies and bounce back to perform in a better and effective way. Arti also reiterates the importance of building an ecosystem of allies including men and women and asking for help.

Over the years, Arti has realised that health is one of the most crucial aspects of one’s overall wellbeing and investing time in her personal well-being is a key priority.

Creating an ecosystem of mentors

If she had to go back and do something differently, Arti would have told herself, “don’t wait for people to give you a mentor”. A strong advocate of organisations nurturing and training individuals to become mentors, Arti says, “But before anything, it is essential to understand your aspirations. Mentors can help you create a plan, which is in tune with your current thoughts. I genuinely believe if each one of us raises our hand to be a mentor, there would be enough people who would be available to be mentors,” adding that mentoring only fails when it is not attached to an outcome.

In the absence of mentors, one can also create “a personal board of directors”, as Arti mentions. “They can include your current manager, leaders in the organisation, and those who always have your back,” she concludes with an endearing smile.

How to Create a Company in 4 Steps

Upstox Likely To Join The Unicorn Club At $3 Bn Valuation

Protecting Your Gym with Smart Features in the Covid Era