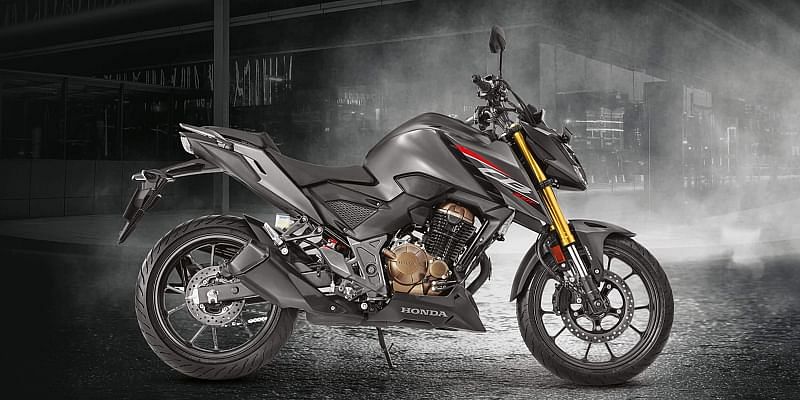 Honda 2Wheelers India has dropped a new naked streetfighter in the form of CB300F. Offered in two variants–DLX and DLX Pro, the Japanese auto giant’s new offering has been priced between Rs 2.26 lakh and Rs 2.29 lakh (ex-showroom) and is the latest addition to the brand’s Big Wing armoury.

The company has started accepting bookings for the motorcycle and deliveries are expected to commence soon. Dubbed as an “Advanced Street Fighter”, the new CB300F sits below CB500F and CB650F in Honda’s global lineup of street naked motorcycles. Its overall design is also reminiscent of its more powerful siblings.

In line with Honda’s street naked range, CB300F flaunts a masculine and sporty design with a low-slung and aggressive stance. The muscular fuel tank is accentuated with sharp lines extending to form the pointy tank shrouds. The V-shaped headlamp further amplifies the bike’s aggressive appeal. The raised tail section, split seats, a compact upset exhaust muffler and split grab rails are some of the other visual highlights of CB300F.

Customers can choose from three colour options, including Mat Axis Grey Metallic, Mat Marvel Blue Metallic, and Sports Red for CB300F. Besides its styling, the new CB300F also offers a sporty riding experience as expected with a middleweight street naked bike. The rider’s triangle is committed thanks to slightly rear-set footpegs.

Honda Selectable Torque Control (HSTC), the Japanese brand’s term for traction control, is also available as standard, which brings stability by ensuring optimum traction during slippery conditions. In terms of hardware, suspension duties are handled by golden-coloured upside-down forks up front and a 5-step adjustable mono-shock at the rear.

A 276mm front disc and a 220mm rear disc, complemented by a dual-channel ABS as standard, takes care of the anchorage duties. The naked streetfighter rolls on 17-inch alloy wheels shod with radial tyres. The rear wheel gets a fatter 150-section tyre compared to the 110-section at the front.

The new CB300F derives its power from a new 293.52cc, single-cylinder, four-valve, oil-cooled engine, quite different from the motor propelling CB300R. The new mill churns out 24 bhp and 25.6 Nm of peak torque while being mated to a six-speed gearbox, which also gets a slipper and assist clutch that enables smoother shifts.