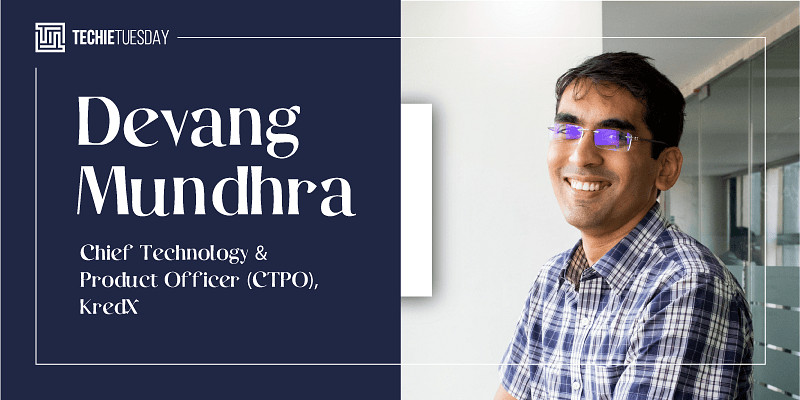 Technology is just a tool to solve a problem. The real focus needs to be on problem solving and developing expertise on that skill.

Devang Mundhra, a software developer from the US, has been following this mantra for the past 10 years. This is one of the reasons why it didn’t take much for this industry-agnostic techie to shift base to India and become a part of the burgeoning startup ecosystem here.

“I aspire to be a good problem solver,” Devang tells YourStory. He joined the founding team of fintech startup KredX as the Vice President of Engineering in 2016, and is now its Chief Technology and Product Officer (CTPO), leading it towards becoming one of India’s biggest cash flow solutions providers.

From the Bay to Bengaluru

Engineering was the default choice for Devang, who joined Birla Institute of Technology and Science, Pilani (BITS Pilani) in 2004 to pursue a degree in electronic engineering.

While he confesses that he never developed an interest in any particular field in science, he was always intrigued with the “how and why” aspect of every concept.

After graduating, he decided to pursue a master’s in chip design from the US.

“Stanford was an opportunity for me to survey new technologies and subjects like Mathematics, Finance, and Design, besides the usual hardware, circuit, chip design, and communication. I choose a mix of all subjects in the first quarter to not restrict myself in terms of learning,” recalls Devang.

Soon, he found his learnings being limited in “circuit designing”, and began gravitating towards optimisation, problem-solving, and applications in Machine Learning and Control Systems.

The Bay Area was Devang’s introduction to the world of startups and how they function. He enjoyed the level of enthusiasm, new technologies, the meet-ups, and brainstorming new ideas.

To gain first-hand experience, he joined computer software startup Lattice Engines as an Analytics Engineer, and worked in developing predictive analytics and optimisation techniques to improve sales and marketing efforts of Fortune 50 clients.

“Working at Lattice helped me with two things. I was able to understand the usage of AI, ML, and Mathematics. Secondly, I learnt how to write software to deliver the solution,” he says.

However, Devang started scouting for roles that would help him gain more confidence and expertise in software development. This landed him at Oracle, his longest stint to date.

He says it was ‘meant to be’ as Oracle was in the middle of launching new products and Devang got his big-ticket entry to this team.

“I spent about six years at Oracle, launched a series of products, learnt about cloud infrastructure, data, and new technologies about how software is built,” says Devang.

While he was learning a lot about software development at Oracle, Devang felt that it had become stagnant from a technology point of view.

Soon, he began interacting with startups founders once again to understand new products, offerings, and technologies in the market.

“The energy, the vibe was very exciting. There were so many problems I could relate to,” says Devang, who had wanted to don the entrepreneurial hat for a long time and finally got the opportunity with the launch of a photo-sharing application Banyan. Though the app was not such a big hit, it came with a lot of learnings.

Continuing with the rationale of “there is a problem and it must be solved”, Devang started looking at the Indian side of business, especially startups, and asked himself the one question that crosses every immigrant’s mind at least once — “Should I move back?”

In 2015, he was on a sabbatical, travelling across India and exploring opportunities in solving important problems using technology. He was introduced to Manish Kumar, Founder and CEO of KredX, and found that the two shared a similar ‘problem-solving’ mindset.

“I was unfamiliar with the concept of growth capital solutions for businesses but after speaking to Manish, I realised it was important for small businesses in India,” he recalls.

Despite his limited knowledge about the fintech solution, Devang believed that technology could change the state of businesses in the area.

So, in January 2016, he joined the founding team of the fintech startup.

This creates a whole new financial asset class by combining advanced software with credit underwriting and data and analytics expertise. So far, KredX has handled over 500,000 invoices, assisting more than 5,000 suppliers through 10,000 investors in 36 locations around the country.

“There was no system, technology, or template for invoice discounting at the time. We had to build everything from scratch,” says Devang.

The tech team at KredX has a straightforward mandate — to make sure that things scale and processes are followed so that customers have the best experience and product.

“Since we operate on a complex domain, which requires handling large amounts of movement of money, we need to solve, implement, and design products that are scalable and robust. We need to be correct, secure, scalable, and at the same time, be adaptive to different customer needs,” he adds.

Initially, Devang decided to run the operations on Google Sheets before building a much more robust solution following a spurt in user base.

He asked himself, “What would create the best experience for users?”, and used that experience to build backwards.

Keeping it simple yet secure

Devang had a mammoth task ahead — to build the whole stack of invoice discounting for investors and vendors (mostly SaaS companies). While building backwards, he saw that a lot of processes like vendor profile checks, risk evaluation, fraud cheques, listing invoices, and e-agreements were missing and started filling the gaps one by one.

Setting up a secure payments infrastructure was one of the biggest challenges for the CTPO.

“First, we had to figure out how the payments would work. Then, came the most difficult part of convincing the banks, and working out on the integration to create a secure and closed system,” he says.

The first version of the platform was kept extremely simple and included only the most important things.

“Our solution was novel and we wanted to use technology that was tried and tested. There was no scope for experiments as far as payments infrastructure was concerned. It is absolutely fine to not get it all right at the first go,” says Devang, who worked with a small team of three developers to launch the first version of the platform.

The need for scaling up the tech was felt as soon as the user base grew; the existing solution to improve system’s performance (Caching) will not work and will need an upgrade.

“Data is very dynamic for us. As soon as payment comes in or time changes, the interest calculations change. We can’t cache this data and rely on old data to serve the customer. I had to build something very different using the same principles,” Devang says.

At the same time, keeping payment latency (the time lag between acceptance of the transfer order by the system and its final settlement) at its lowest was one of the major targets the CTPO had set for KredX.

The engineer did look for plug-and-play solutions, but nothing was satisfactory in terms of giving control over the data, which propelled him to create KredX’s own layer of caching, data access and authorisation.

Hesitant at first, Devang started to add configurations, which eventually became a nightmare to handle. Nothing new was being built or experimented with. He finally decided to build a platform, which not only had some configuration but also had a hierarchy that allowed room for innovation.

“We went into a mix of rules. Nobody could add new configurations easily and every configuration added would have to be tested. It was an entirely new framework, which was both flexible and stable,” says the CTPO, who had his share of failed experiments within a safe reach.

At present, Devang is working on different products with a common goal of catering a full-stack of supply chain finance. Strongly advocating against building a “closed boundary” model, he says integration with other players in the ecosystem is important and cannot be done without.

“Operating systems for supply chain finance is a whole different ball game. This means that we have to build a much more integrable platform, which caters to the requirements of different industries. It’s an ambitious mandate that we have given ourselves,” he says.

An avid tech blog reader, Devang draws his inspiration from all the open-source tool creators in the world.

Capital Float, Razorpay partner to offer BNPL to over one lakh online businesses

Leaders’ role in creating an accessible and sustainable workplace