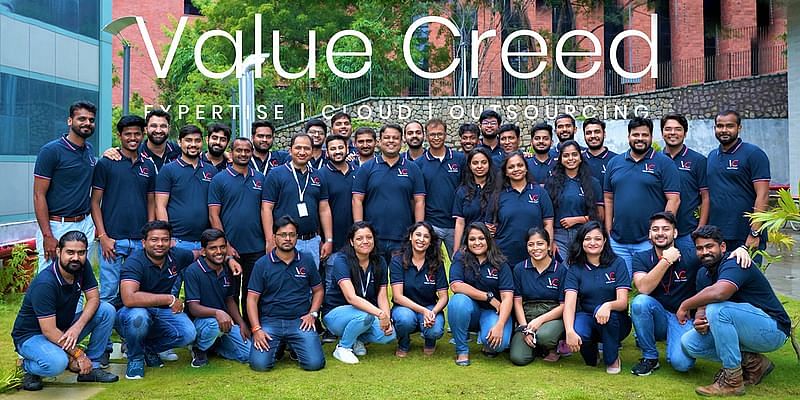 Starting as college friends, both Nitesh Raj and Priyankar Datta dreamt of motivating people and driving them towards achieving their goals. Through the years, they stayed in touch, making plans to bring their dreams to fruition. And in 2016, years after passing out of college, they finally had an idea. Nitesh’s expertise in technology, coupled with Priyankar’s measured approach towards understanding Commodity Trading and Risk Management (CTRM), helped them establish Value Creed. Although the services offered by the company significantly pivoted since its inception, its dedication towards putting its employees first remained unchanged.

To upgrade, improve, and optimise CTRM platforms, Value Creed introduced a new model to the CTRM ecosystem. Since it came into force about five years ago, it has supported more than two dozen companies in their CTRM journey by providing services like dual time zone managed services, deep CTRM expertise on-demand (functional and technical), CTRM upgrades, testing benefits for new extensions and modifications, cloud configuration and management, and Business Process Outsourcing.

Once Nitesh and Priyankar had a consolidated idea about starting their new business, both of them left their respective jobs and used their savings to realise their dream. Initially, they had to take up several small projects to stay afloat, before they made the shift to owning parts of the digital transformation journey for various CTRM clients. It was in 2017 when Value Creed began its full-fledged operations in the CTRM domain with the vision of finding and nurturing talent. They wanted to break stereotypes that limited employees’ growth in an organisation, and they did exactly that.

They hired their first team member for their Hyderabad office, which was nothing more than a one-BHK apartment. After she took the leap of faith, they found more people whose vision aligned perfectly with the company’s, and as a result, their team and services grew significantly within a year. In late 2018, the entire Value Creed team moved into a brand new office. They outgrew that office space very quickly and eventually moved into an even bigger office soon after.

Soon the size of the team grew 200 per cent, and then the pandemic hit. But the pandemic didn’t hinder Value Creed from hiring new talent, providing 100 per cent increments, or conducting vaccination drives. Now, with the operations having been expanded to the USA, Canada, and very recently in Europe, Value Creed has grown in leaps and bounds in just five years.

While the services provided by Value Creed attracted a substantial amount of attention (and clientele), it was the way they treated the team members that set them apart from their competitors. With a belief that investing in the team and allowing them to outperform themselves is the biggest asset any team can have, the HR team at the company strives to work for the betterment of its employees. Case in point is their Employee First policy.

The policy aims to break stereotypes of the typical workplace and ensure that employees are provided with the platform to utilise their talents and explore new opportunities. Apart from the Human Resources team, the leadership team follows the growth trajectory of its employees closely, helping them where they can. Their involvement in the recruitment of new talent helps them find the right people, empower them, and then tap into their potential to bring out the best in them.

Value Creed defines an ideal workplace where our people feel valued, trusted, and engaged. We create a positive environment and always encourage new ideas to be brought to the table. The Rewards & Recognition programs and the fun-loving culture keep the employees’ spirit and positivity alive and make them feel that they are a part of something larger than themselves.

Value Creed encourages its employees to participate in various activities that aim to build trust among team members. While helping people grow their expertise, it also helps them collaborate with others when working on challenging projects. This model is further helped by the company’s employee feedback survey model, which is acknowledged by the leadership team regularly.

[Techie Tuesday] From the US to India’s hinterlands, how Rikin Gandhi built a sustainable agritech ecosystem for farmers