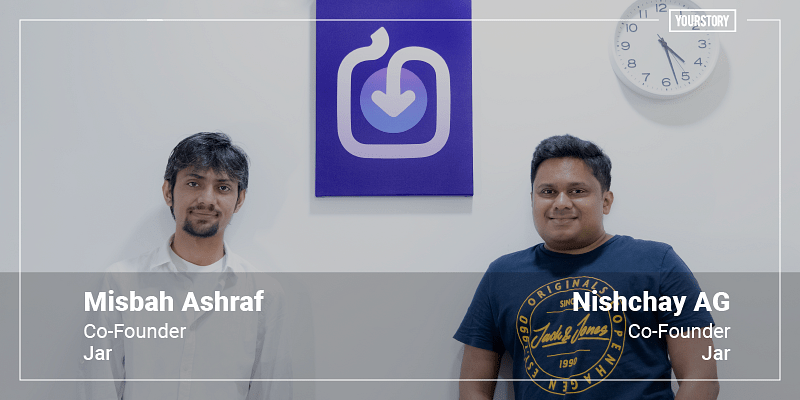 Technology has simplified everything, even managing and growing wealth. The tech-savvy generation may be extremely comfortable with digital banking and online investing tools, but has not yet made savings a part of their everyday life.

Bangalore-based startup Jar aims to make the new generation familiar with the saving and investment culture at an early age with a “digital piggy bank”.

Launched in May, the Jar app helps people save money by taking spare change from their online transactions and automatically investing it in digital gold.

Founded by Nishchay AG, former director and founding member at mobility startup Bounce, and Misbah Ashraf, founder of community-focused ecommerce platform Marsplay (acquired by Foxy in 2020), the three-month-old app has been registering a month-on-month growth of 350 percent and has reached around 0.5 million users in a short span.

Building financial well-being for the masses

The idea of building Jar is not restricted to millennials or GenZ.

The founder duo has been mulling over the idea of starting a “mass movement” in saving and investment for years. While heading monetisation at Bounce, Nishchay was drawn to the idea of financial inclusion, and savings and investments for a larger population – beyond opening a bank account and UPI-based transactions.

“Financial services offered by startups are still restricted to the creamy layer. Fewer than 30 million people are investing in stock markets, mutual funds etc; the rest are underserved. We wanted to build a platform for a larger population and get them to start saving early. There is still a huge gap between the first rupee earned and invested,” says Nishchay, who met his co-founder during his stint at Bounce.

The company was engaging with Misbah’s venture, Marsplay, for a collaboration when the duo began brainstorming over the idea of starting a new venture around savings and investment.

Misbah drew inspiration from families with a history of bad debts, and poor financial planning and literacy. Hailing from Bihar, he saw how a bad financial condition put his family into a never-ending debt trap and realised the importance of making savings at an early stage in life.

“I and Nishchay come from middle-class families where financial literacy is limited. The common thread among all these families is their trust in gold as an asset class and we aim to leverage the same through our platform,” he says.

Put money in the ‘Jar’

Jar allows users to save money in three ways—round-ups, daily savings, and one-time investment—and then invests that money in digital gold.

A recurring payment (Paytm) can be set up by users who can commit to invest any amount starting from Re 1. Second, a one-time saving as per the user’s wish can be made through the platform.

Third, users can use Jar’s feature that accrues small sums of money each time they make a transaction. For instance, if a user has spent Rs 17 on a transaction (which Jar app is able to spot by looking at the SMSs), the app rounds up that money to the nearest 10th — which is Rs 20 in this case, and invests the difference (Rs 3).

Once users have saved some money in the Jar, the app then invests that into digital gold. The 10-member team startup has partnered with digital gold platform SafeGold and earns a commission from the investments. It is also the first to use UPI 2.0’s recurring payment support.

“Users can set up mandates as per their choice. It’s all about habit building. The aim is to help the masses build better behaviour with money and savings so that they don’t end up spending everything they have,” Nishchay says.

A slew of savings, investment, trading, and financial planning apps targeting the new generation have come up in the Indian market. These digital apps like Walnut, Saveabhi, and Splitwise aim to help save money while others like Fundsindia, Kuvera, Invezta, Zerodha, and Groww are focused on wealth management.

What will work in Jar’s advantage is the gold fascination of Indians and already built trust in the asset. Majority of people, especially the new generation, look for ease of investments and higher returns, but also for assets that help them fulfil their aspirational needs and are a good emergency corpus.

Jar claims to have simplified the whole process for users. Sign-ups happen in less than a minute which, according to the founders, is the biggest win for it.

“We have gamified the experience. You may be bad with budgeting or have no knowledge about money. We automate savings as a behaviour and help users build a corpus over a period of time,” the founder says.

India emerged at the top for the number of finance apps downloads in 2020. The country is home to a large unbanked population and has the fastest-growing mobile-first population – these factors have led to the surge.

It had raised $500,000 from friends and family as a seed round in March. The startup is partnering with gig economy workers, women empowerment organisations, and corporates to offer this platform to their employees to start their journey of saving and investment.

How patience and innovation helped turn Gupshup into a unicorn

Started with an aim to restore the ecological integrity of common lands, FES has impacted over 9 million acres ever since