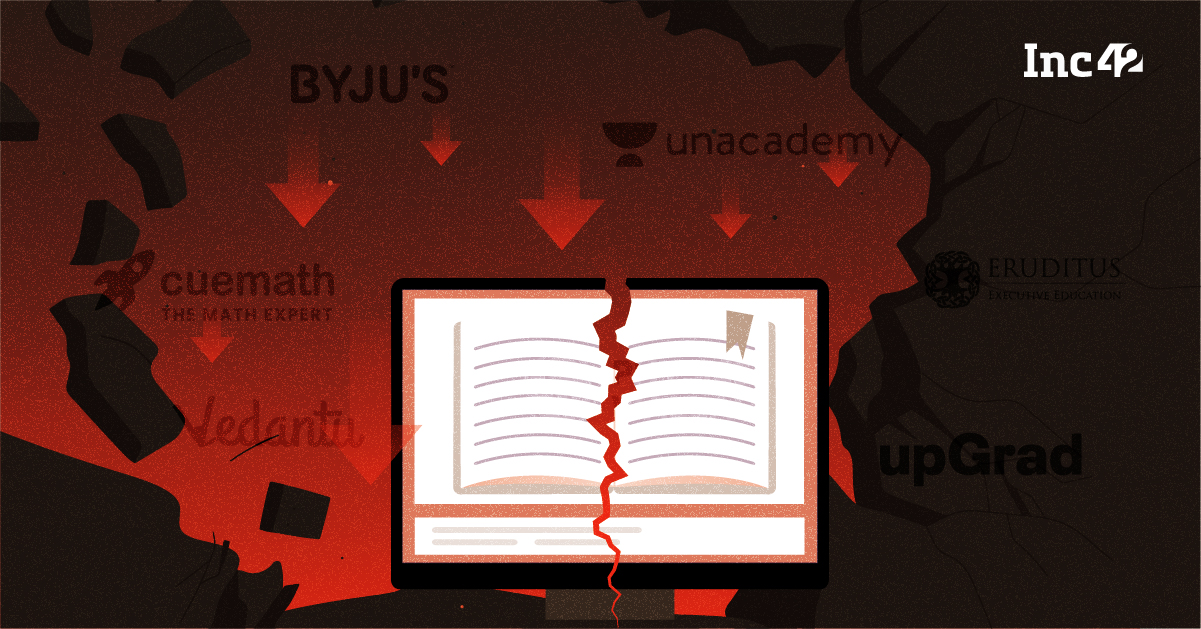 Given that access to funds is harder and reaching students is also becoming costlier in many ways, edtech startups and giants in India are in a short-term crisis of sorts

After the boom comes the fall. And while it is not the end of edtech in any manner, we are at a crossroads for sure. Edtech startups had huge ambitions and a lot of fuel in the past two years, but that party is winding down as even giants are scrambling for stability.

From K-12 to skilling to test prep and non-curriculum edtech, every segment thrived amid the pandemic and for a while it looked like this bellwether event might accelerate India’s towards a permanent edtech future.

From September 2020 to June 2022, the sector minted as many as six unicorns, including Unacademy, Eruditus, UpGrad, Vedantu, Lead School and PhysicsWallah. In all the years prior to this two-year period, India only had one unicorn in the form of BYJU’S.

The edtech sector does not seem to be on track to match the pace of 2021 if the current year is any indication. 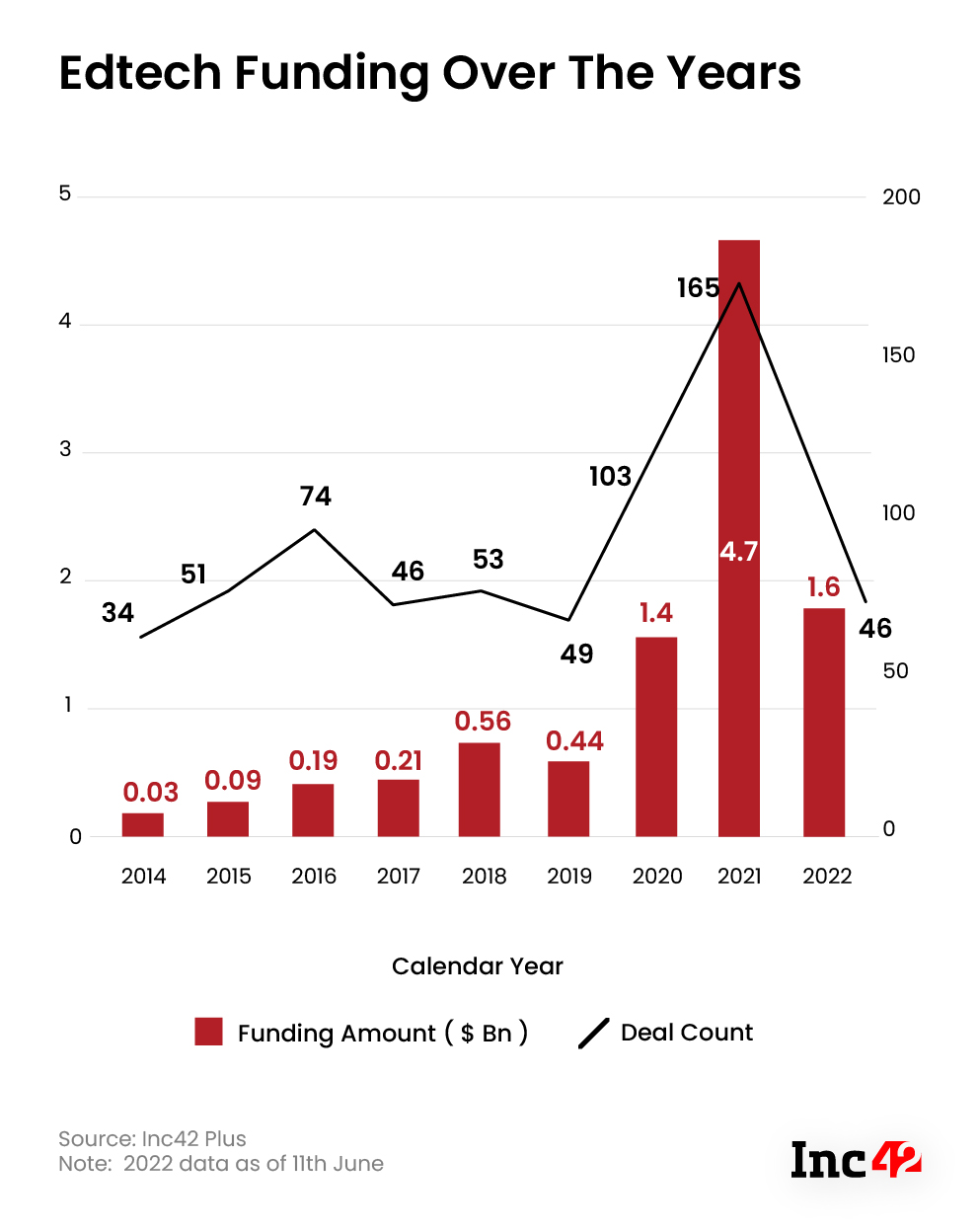 The fact is that it is not only the funding winter or schools reopening that have impacted startups in edtech. Amid the boom of the past two years, uncertainties such as lack of profitability and heavy acquisition costs were sent to the background.

But now access to funds is harder and reaching students is also harder, edtech startups are in a short-term crisis of sorts. As we can see funding is just a third of what was seen in 2021 so far, with nearly half of 2022 now completed.

The few large edtech companies that can afford a wait-and-watch policy are now scaling back from capital-intensive models and others are going through layoffs due to the flawed growth strategy of acquiring customers at any cost without thinking about long-term sustainability.

In the past few months, edtech unicorns such as Unacademy, Vedantu, Eruditus, BYJU’S-owned WhiteHat Jr have laid off employees besides FrontRow and Yellow Class, Lido learning and others. Some startups such as Udayy and Superlearn have even shut shop. 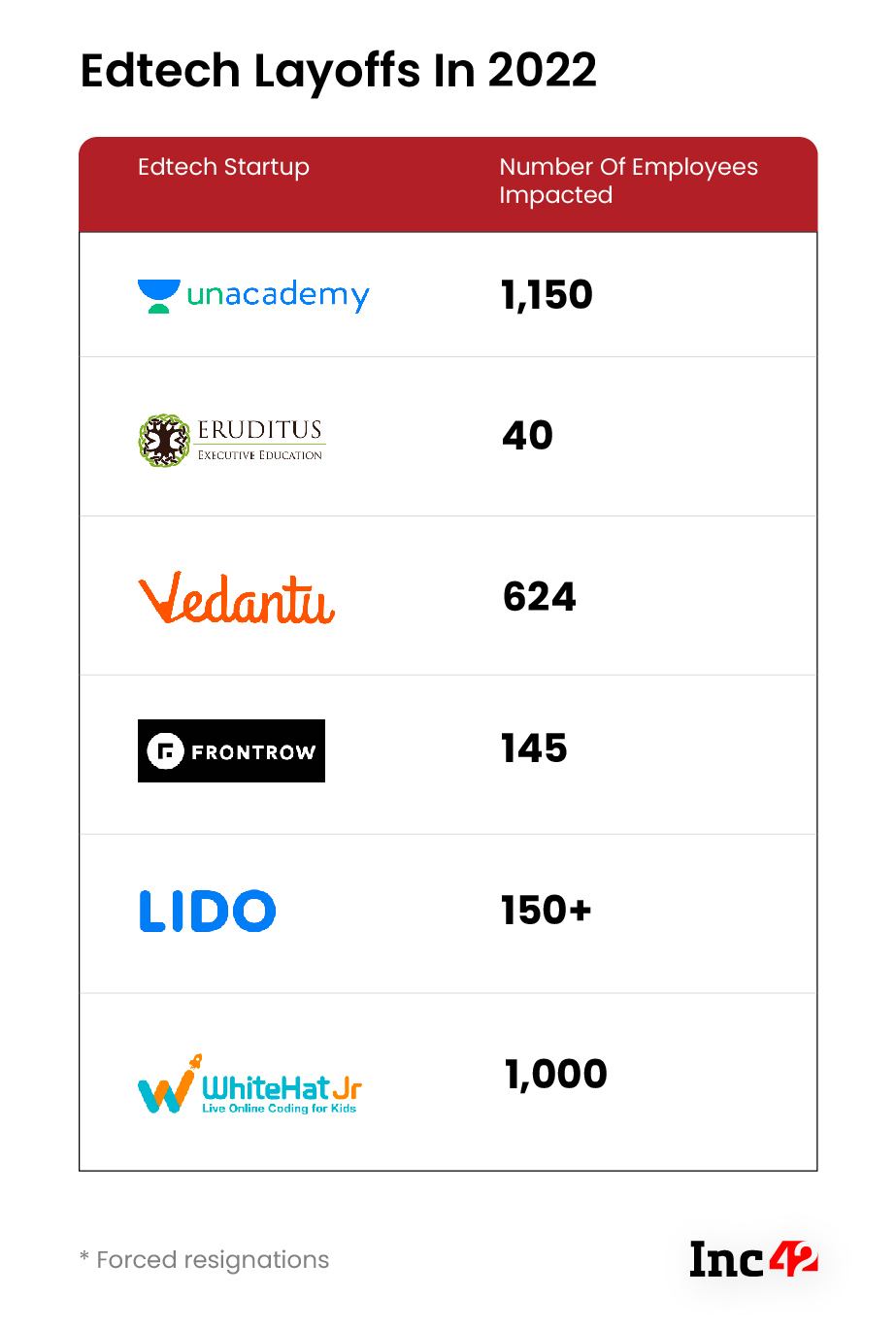 Overall, the edtech slowdown has impacted the livelihoods of more than 3,000 people directly.

According to Rajeev Suri, managing partner at Orios Venture Partners, the sector is facing short-term volatility owing to the current global situation, which is being seen across the ecosystem. “The environment right now has turned volatile for a lot of people. And the reasons are very clear. The Russia-Ukraine war is happening. Then there is a commodity price boom due to supply-side issues and the demand side rising. In addition, the interest rate hike is causing consternation in the market,” he said.

In terms of the impact on edtech startups, the K-12 segment has fared the worst.

“Among the sub-categories, K-12 is the most affected as parents want children back to school and back in the offline world. However, test-prep or professional learning won’t be as affected as K-12,” said Kushal Bhagia, founder of the Mumbai-based VC firm All In Capital.

But for K-12 and the test-prep segments, a new playbook is unfolding. Although these sub-sectors are fast reverting to offline/hybrid mode in urban India, students from small towns and rural areas who earlier often found it difficult to access good teachers and quality study materials flocked to the online platforms.

The accessibility issue is quite real for students from Tier 2 and Tier 3 locations. “The edtech promise was that you would get good teachers at a reasonable cost. And it still remains true as many edtech platforms offer courses that are not available to students in remote areas,” Bhagia added.

Experts and investors believe that the pendulum shift is happening towards offline. After the exception growth for online during the pandemic. There are plenty of opportunities for vernacular edtech solutions, noted Orios’ Suri.

With just about 10% of Indians speaking English, edtech companies could easily tap into a new set of user base and offer content in regional languages.

Besides the challenges of hybrid test-prep and K-12 segments, which we will come to shortly, edtech startups in reskilling and upskilling will also face growth hurdles after two years of boom. As offices open and most employees are mandated to return, they may not have enough time to pursue full-time online courses as before, and the demand may drop significantly.

As the edtech sector in India seems to be grappling with funding freeze, demand drops, mass layoffs and closures, some companies have stayed a step ahead, widened their offerings and explored a hybrid model in search of growth.

For example, edtech behemoth BYJU’S acquired Aakash Educational Services (AESL) last year for $1 Bn in a strong push to launch offline tuition centres in 2022 to supplement its online offerings. But this is not exactly new for the eponymous brand that started as an offline coaching centre before entering the edtech space.

In a similar vein, edtech unicorn Unacademy has opened its first offline centre in Kota. Besides Kota, the startup plans to launch the centres in Jaipur, Bengaluru, Chandigarh, Ahmedabad, Patna, Pune and Delhi-NCR. Edtech platform PhysicsWallah, India’s 101st unicorn, has also forayed in the offline learning space with the launch of its first centre in Kota.

As Suri pointed out, going hybrid after establishing an online brand is not just happening in the edtech space but across the board. While it is cheaper and faster for a startup to build a brand online, the physical endeavour will make it more trustworthy among users.

Infinity Learn, one of the new edtech firms set up in 2020, went hybrid last year. “We believe hybrid will help us create the local connect,” said CEO Ujjwal Singh. For instance, the company offers problem-solving classes through local tutors, while regular classes are held online.

The hybrid model is difficult to scale, though, especially for early startups. It may work well for BYJU’S which has plenty of capital to count on and a reputed brand like Aakash in its fold. But costs will rise significantly for other edtech startups building their offline presence from scratch.

For example, Unacademy has opened its new learning centres in Kota and hired former faculty members of Kota-based coaching centre Allen Career Institute. While the pay scale of these educators is already high in Kota, it may be difficult for the edtech platform to recover the cost amid intense competition from not just other offline players, but online players as well.

High customer acquisition cost (CAC) is a major hurdle whether we are talking offline or online learning and this hinders edtech giants’ plans for the hybrid model as well. According to industry experts, edtech players, on average, spent 70-80% of their total revenue on CAC. This fell by 30-40% in the first year of the pandemic, but the high CAC days are back now that life is gradually returning to normal.

“For most of the edtech companies, customer acquisition is largely ad-driven and costs a lot,” added Bhagia.

Although the entire education sector is primarily driven by push marketing, it is more challenging for edtech players as they do not earn as much as established offline centres, he explained. 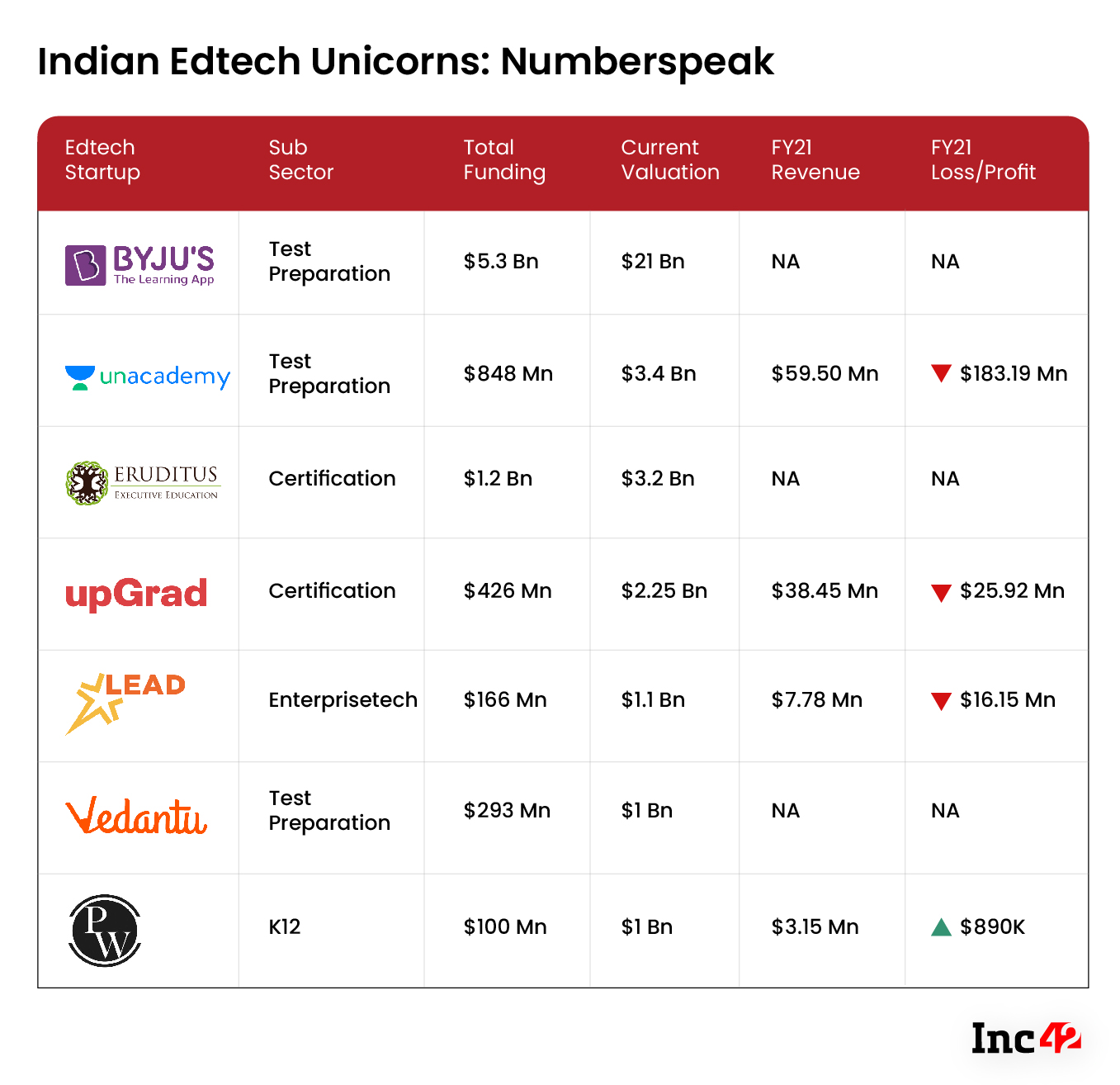 Rather than offering courses at a high price, edtech players need to look at alternatives such as micro-transactions priced INR 50-INR 100, investors told us. In addition, a freemium model where users can access certain content without paywalls may also result in higher conversation rates based on content quality.

The Ray Of Funding Hope For Edtech

Despite the much-touted funding winter, edtech unicorn UpGrad recently raised $225 Mn from James Murdoch’s Lupa Systems and New Jersey-based Educational Testing Service (ETS). The company also expects to raise another $100 Mn at a higher valuation but has not closed the round yet.

The edtech sector also witnessed the birth of another unicorn as Noida-based PhysicsWallah (PW) raised $100 Mn earlier this month to enter the unicorn club. It claims to be running a profitable venture since pivoting from a YouTube channel to an online learning platform in 2020.

The recent fundraising indicates that investors have not discarded edtech’s potential for the long term. Many think online learning is going to co-exist with the traditional model. However, edtech platforms need to focus on affordability, content quality and, most importantly, profitability instead of burning cash on marketing and aggressive expansion.

The key to success will lie in creating value among customers either through pricing or outcomes and building a sustainable business model with a path to profitability. And only those edtech startups that get there through innovation or strategy will stay the course for the long term.

How 5G Will Be A Gamechanger For Startups

How to build an audacious and fearless engineering culture