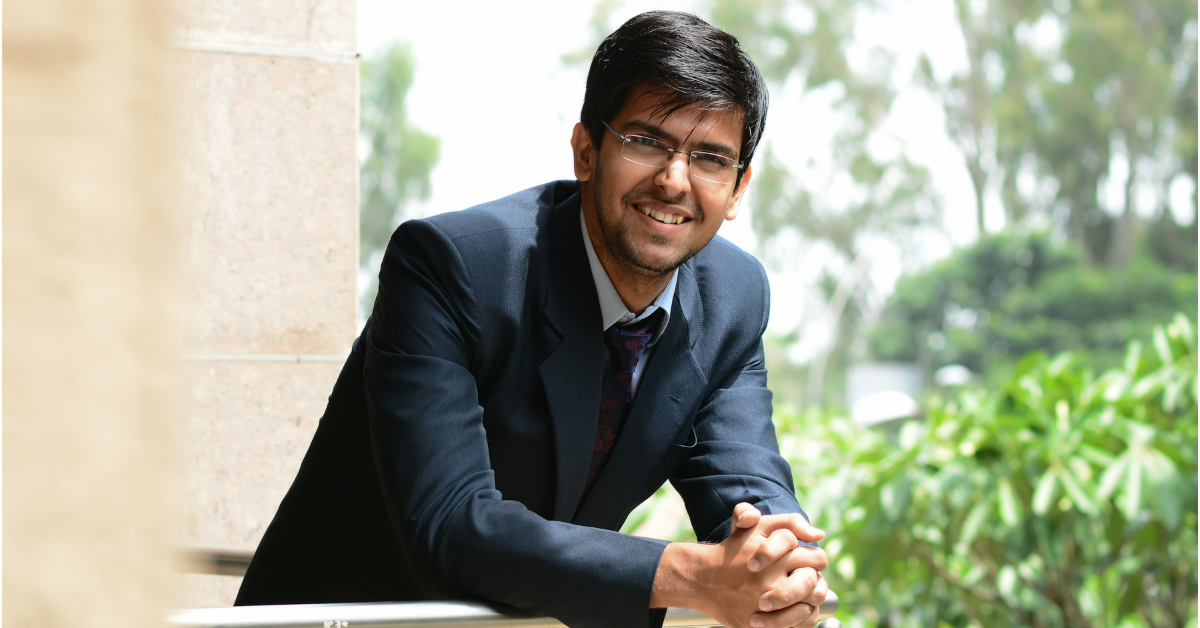 Recently, a clutch of government stakeholders in the fintech industry gathered in a rare offline meeting and launched the UPI123Pay— the digital payments solution for feature phones first being announced last December.

During the launch – led by the RBI governor Shaktikanta Das, a video was played, announcing the various ways in which users can pay using UPI123Pay. At about 2:38, we see the sound-based payment technology introduced, wherein a user taps a retail pod. Here, ToneTag comes into the picture (quite literally).

This retail pod took six years’ worth of research and development, all working towards bringing the users who use these feature phones into the larger digital economy’s fold.

Speaking with Inc42, Vivek Singh, cofounder and director – labs, ToneTag, said, “There are a lot of things which has happened over multiple years of time.”

ToneTag has not only developed this device, called the RetailPod, but also has developed the whole IVR stack that makes UPI123Pay possible. The startup, founded in 2013 by Vivek and Kumar Abhishek, who is also the CEO of ToneTag, looks all set to take off.

ToneTag has raised $13.2 Mn thus far, and its investors include the likes of Amazon, Reliance Capital, Mastercard, 3one4 Capital, and Tropical Star Limited.

The Rise of UPI

Before we get into the conversation, it is first important to establish context. UPI123Pay uses the original UPI stack and created an IVR gateway for the same, pretty much in the same way QR code and NFC payments are enabled over the UPI’s stack.

Before UPI123Pay was introduced, however, there was the National Unified USSD Platform, or NUUP, that allowed feature phone users to make payments via a USSD number, *99#, to avail mobile banking features on feature phones. The users could make payments of up to INR 5,000 in value.

UPI123Pay allows a user to avail the functionality of UPI over an IVR system, wherein a user can register themselves to use UPI. While NUUP was limited to Central Bank account holders, UPI123Pay can be used by anyone irrespective of the bank they have an account with.

If we talk about the recent statistics, UPI had recorded 452 Cr transactions in February 2022 worth INR 8.26 Tn ($107.52 Bn). Currently, according to NPCI stats, there are 47 payment service providers (PSPs), and 257 issuers, taking the total entities offering UPI to 304.

UPI has also been getting a lot of attention overseas, with NPCI International Payments Ltd (NIPL), the international arm of NPCI, partnering with Gateway Payments Service (GPS) and Manam Infotech to deploy UPI in Nepal.

With UPI123Pay, ToneTag looks set to take UPI to the offline segment of Indian society. According to RBI, there are more than 400 Mn feature phone users, and hence, the incentive for such an undertaking is quite obvious.

The Sandbox Experience With RBI

ToneTag was a part of the first cohort of the RBI Sandbox for Feature Phone Payments, which was a year-long sandboxing process. Along with ToneTag, PaySe, Citycash, IND-e-Cash, BHIM Voice, and Eroute Technologies were part of the cohort.

The cofounder also pointed out that ToneTag is the first company to develop a payments technology that involved sound as a technology.

However, Paytm was one of the companies that were testing a similar technology; while Paytm’s ‘Sound Pay’ trials ended inconsequentially, ToneTag has managed to flesh out its interpretation of the same.

Vivek also informed that apart from RBI and NPCI, the Institute for Development and Research in Banking Technology (IRBDT) was also involved in the sandboxing of ToneTag’s technology.

The ToneTag team went to villages in Bihar and Karnataka to test the technology. They performed tests in a controlled environment and shared their findings in a report to the RBI.

ToneTag claims that its technology works on any phone now, not just the feature phones. The payments framework can work across geographies, across devices, and even without the presence of an internet connection, according to Vivek.

According to Vivek, ToneTag’s system will allow users to make payments without the help of any apps; they just need to dial a number.

As he said, “We will come into [the] picture immediately.”

The cofounder told us that the ToneTag team has developed the complete IVR stack for digital payments, a system that allows a user to make payments using voice as input, similar to that of Siri, Alexa, or Google Assistant.

The ToneTag cofounder explained that their solution is very specific, and focuses only on facilitating digital payments.

Vivek also told us about the post-launch tests that the startup did, and to their delight, the response has been ‘really good’ in places such as Bihar and Jharkhand.

Security is always the elephant in the room in case of anything related to digital payments, and Vivek explained how ToneTag’s VoiceSe uses the telco security framework to ensure the highest security digital payments can get.

According to Vivek, IVR’s strengths lie in the fact that it is a very basic feature. He added that when a user receives a call, all the other services are immediately sent to the background. Therefore, IVR systems are immune to any kind of spoofing.

Vivek further explained the security of VoiceSe. He said that the keypresses during an IVR call when a person enters the PIN are carried over a telco’s secure audio channel to the payments systems. “So, [the] chances of hacking chances of phishing chances of someone else. middle man person, knowing your detail is very, very, very low,” he said.

According to Vivek, ToneTag has plans to enable any device that can either generate or receive sound to receive digital payments. He also claimed that ToneTag is the only technology provider in the world that can enable any card swiping machine for contactless payment.

This has seen ToneTag develop a huge ecosystem of devices in such a short time, all the while working behind the scenes. 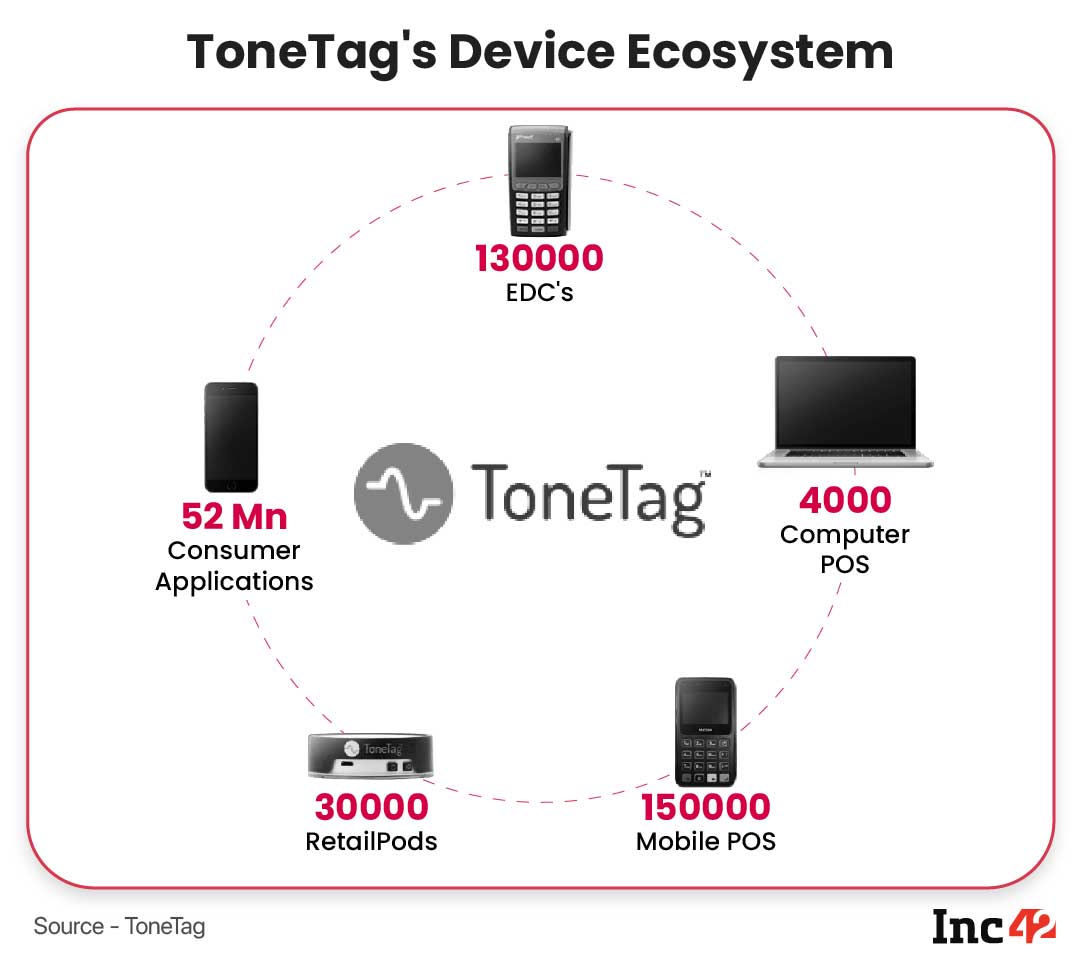 ToneTag will enable devices to accept contactless payments via sound, and Vivek informed that the startup has already teamed up with ICICI Bank to enable its devices to receive sound-based payments.

Apart from that, the startup will also work to upgrade the POS machines, without changing any hardware, to allow them to accept sound-based payments.

Along with all of these devices, ToneTag has developed the RetailPod, a proprietary device that enables a sound-based tap-to-pay feature for feature phones, as seen in the RBI video on UPI123Pay mentioned before.

ToneTag’s Use Cases Beyond Payments

ToneTag has plans to bring engagement solutions for enterprises, allowing companies to engage their customers better. The startup will employ two forms of technologies – one using Bluetooth Low Energy (BLE) and the other using sound to transfer data.

However, Vivek pointed out that there were two challenges.

First, the smartphones were not designed for working on a level that was required for normal BLE solutions. Second, most Indian users keep the Bluetooth on their smartphones turned off.

ToneTag, though, uses sound to work around that. Sound, and a user’s phone’s mic.

Vivek noted that since no phone’s mic is ever blocked, ToneTag has developed experiences that allow its B2B customers to project content directly to the users’ phones, without the users having to scan a QR code. The users can open a companion app and receive content such as menus, advertisements, and so on.

ToneTag claims that it can enable any device that can generate or emit sound for its use cases, be it payments, engagement, or anything else.

“The only challenge is the technology itself is kind of new in the market,” Vivek said.

The technology is new, and therefore, it will take time to build trust among users, just like its predecessors did. Second, technologies such as NFC and QR codes have highly recognisable design language, and that is something the startup has to pay attention to as well.

Third, there is the challenge of proliferation. Currently, the NPCI has only approved VoiceSe and UPI123Pay for a maximum of INR 5000 per payment, and INR 1 Lakh in transactions per day.

For comparison, NFC payments are capped off at INR 2000 per transaction.

Given that only a small percentage of UPI transactions are valued under INR 2,000, ToneTag will have to look at how to improve proliferation. For context, in February 2022, only 15% of P2M transactions and 20% of P2P transactions were under INR 2000. ToneTag hopes that the transaction limit will be increased as the trust around its product builds.

Putting It In The Fifth Gear

The startup has yet to take the limelight for what it has achieved. Vivek pointed out that ToneTag has not had a proper launch, and has not done any marketing around itself.

Vivek added that since UPI123Pay is a new product too; if ToneTag launches now, it will have to invest time and resources in explaining how UPI123Pay works as well. However, Vivek said that they plan to ‘put it in fifth gear.’

When asked about any upcoming funding plans, the ToneTag cofounder said that there is none in the immediate future.

The startup is looking to take it slow, and go step by step, instead of jumping the gun, as Vivek put it. VoiceSe looks set to compete with the likes of QR codes and NFC, and if the startup manages to deliver the instant payments experience that it has claimed, that would truly revolutionise the digital payments ecosystem.

Looks like (some) neobanks will be OK after all – TechCrunch

DFINITY Is Fastest, Most Scalable General Purpose Blockchain, According to Report

Are convertible notes the right way to fund your startup? – TechCrunch