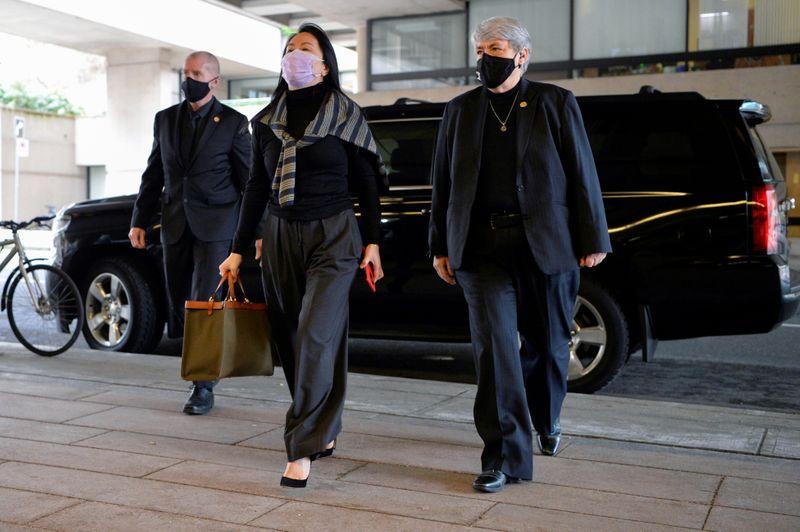 By Sarah Berman and Moira Warburton

VANCOUVER (Reuters) – Canadian prosecutors told a court on Thursday that it was not a judge’s role to decide whether national security and geopolitical concerns can be used to strike down a U.S. request to extradite Huawei executive Meng Wanzhou.

Meng, 49, was arrested in December 2018 on a U.S. warrant accused of misleading HSBC about Huawei’s business dealings in Iran, putting the bank at risk of violating U.S. sanctions. She has said she is innocent and is fighting her extradition case from under house arrest in Vancouver.

Prosecutors argued on Thursday that if Meng had become a bargaining chip in a trade war between the United States and China, as her lawyers say, then Canada’s minister of justice was the right person to decide that, not a judge.

Canada’s extradition process dictates that a judge will first decide whether an extradition claim is legal, before the country’s justice minister makes a final decision on whether to extradite that person.

Lawyers for the Huawei chief financial officer have asked for her case to be thrown out. They point to statements made by former U.S. President Donald Trump in December 2018, when he said he would intervene in the case if it would serve national security interests or help close a trade deal with China.

Canadian prosecutor Robert Frater said a British Columbia Supreme Court judge would not be able to determine whether Huawei was indeed a national security threat to the United States, as defence lawyer Richard Peck suggested on Wednesday.

“Everyone in this courtroom knows that the elephant in the room in this case has always been the geopolitical winds that swirl around it,” Frater said on Thursday, adding that the defence tried to bring the elephant into court.

He urged the judge to focus on facts and law, and “leave the politics to the politicians.”

Defence attorney Eric Gottardi acknowledged that Trump may have been vague about the manner and timing of his alleged threat, but said that the president was not vague about his intention to intervene.

Gottardi said that more appropriate comments made by other U.S. officials were not as influential as they were all subordinate to the president.

“He has the most authority,” Gottardi said.

Diplomatic relations between Ottawa and Beijing broke down in the wake of Meng’s arrest. Days later, China detained two Canadians on espionage charges, which Canada viewed as retaliation.

Hearings were expected to last five days this week but both sides completed their arguments early. Meng will return to court on March 15. Her case is set to wrap up in May.

(Reporting by Sarah Berman and Moira Warburton in Vancouver; Editing by Matthew Lewis and Stephen Coates)

Motorola’s Moto Razr 2022 may be delayed with no clear timeline for launch- Technology News, FP