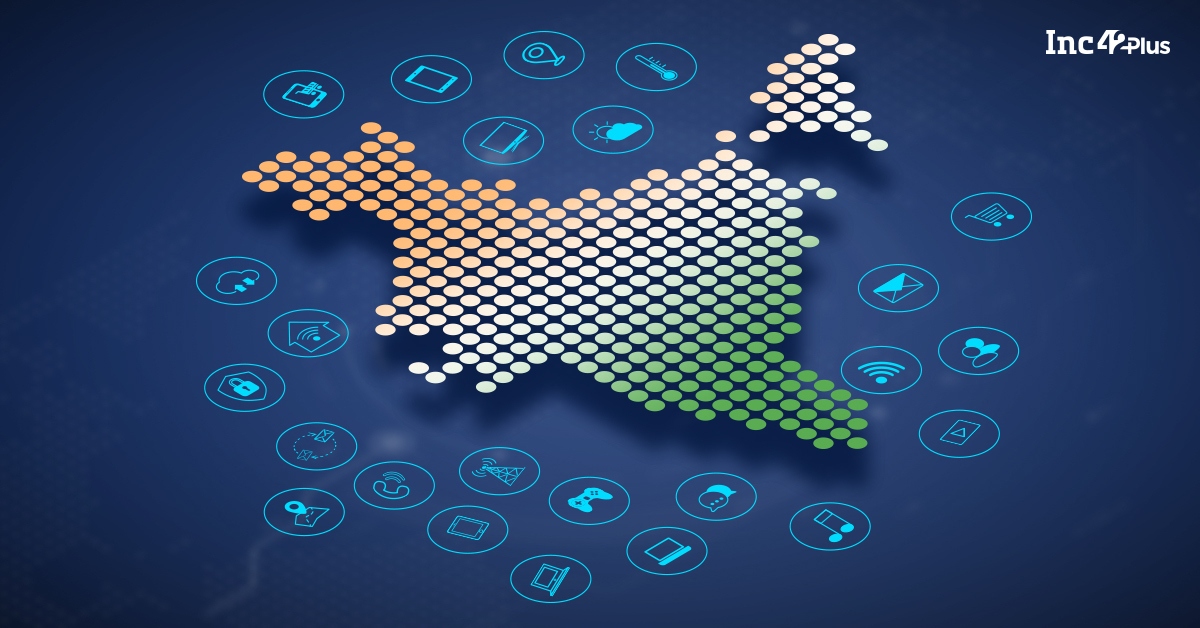 Today is a special day as India steps into its 75th year of independence. Growing up in the early 1990s, like many others, I had immense pride in India’s past and heritage, and it wasn’t until I ‘went online’ that I became excited about its future and the possibilities that it could bring. I suspect the same is the case with many of you too — in many ways, the internet brought a sense of real independence to Indians.

The internet changed my world and exposed me to ideas that have led to the era of startups and technology — not just me, but pretty much for the entire world. India today is a hyper-connected place, which is hurtling full speed into an internet-first market. While that continues to excite me, it comes with its own perils, not least of which are the digital divide and the cost of access for many critical services, but we reserve that for later in this piece.

Firstly, we want to celebrate how the internet freed India from the shackles of the past. While India became independent in 1947, the internet has been the real freeing force for many. It gave us a view of a world that can be and changed our ways of thinking. When the internet entered Indian homes after 1995 when it was allowed for public access, it showed us that there were technology-led businesses around the world and yes, they could be tailored for India too.

By 2000, when connectivity had become easier in the metros and Y2K was a real fear, the internet showed us that delightful products can come from anywhere — after all you had just switched from AOL to Google, just a startup at the time.

By the time we had entered the new millennium, the internet had given us enough courage to build ventures from ideas, learn from the experiences of those in Silicon Valley and bring them to the Indian market and then innovate further to build new ideas and new startups. The internet ushered in the age of startups and is the most crucial pillar in today’s digital-first age and the post-pandemic world. The goal, as stated publicly by the government and think tank Niti Aayog, is to take the digital economy to $1 Tn market size by 2025. And the internet is the backbone of this plan.

Which is why we dedicate this special edition of The Outline to the power of the internet. 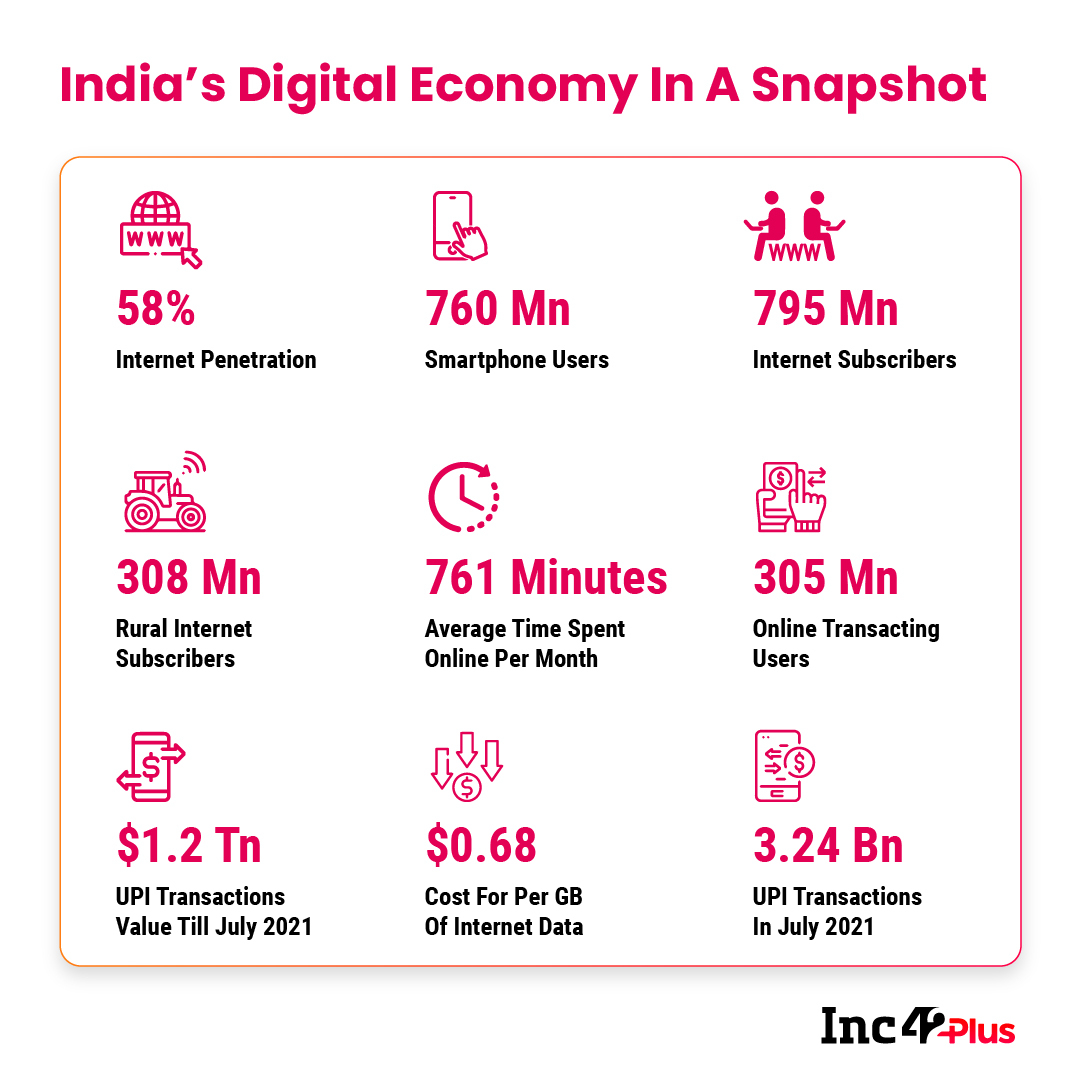 Rural India Wakes Up To The Internet

Indians spend around 107 minutes (1.8 hours) on the internet every day. We have a heavy reliance on the internet — whether it is simply entertainment or content consumption or something more productive. Users in urban India are spending 17% more time as compared to rural India. From online commerce in Tier 3/4 towns to the rampant consumption of vernacular social media content to agritech platforms catering to farmers in villages, to digital payments and lending tech platforms improving financial inclusion, the internet story is beginning to take roots in rural India too. The Internet Ushers In The Age Of Startups

Naturally, the huge internet user base means digital is big business today. In 2021, India is home to more than 55K startups and this has come largely due to the freedom to build and the ease of access to internet platforms.

It wasn’t always so — to some degree the Standup India, Startup India clarion call by PM Narendra Modi on Independence Day 2015 was a big push from the policy side. It also focussed the attention of investors on startups. With the investor pool expanding along with internet penetration in the past five years, B2B and B2C sectors such as banking, retail, healthcare, agriculture, logistics, social welfare policies, entertainment have all seen major overhauls.

The internet penetration made startups more relevant to the economy, and one of the biggest indicators of this is the way the central and state governments have relaxed norms in areas such as foreign direct investment, public listing, compliance burden and more to boost the prospects and growth of digital startups.

The internet economy is not just creating startups, but also jobs. In FY20 alone, $1.8 Bn was spent towards employee benefits by the top 95 startups, according to Inc42 Plus analysis — nearly 450K provident fund accounts have been opened by the top 82 Indian startups in the past four years. The Indian consumer digital economy is expected to cross triple digits GMV for the first time in 2021 and eventually become a $350 Bn market by 2030. On the B2B side, the Indian market will be a $1 Tn opportunity for SaaS companies by 2030, and SaaS startups are said to generate $2 Bn-$3 Bn in total revenues, according to SaaSBOOMi. 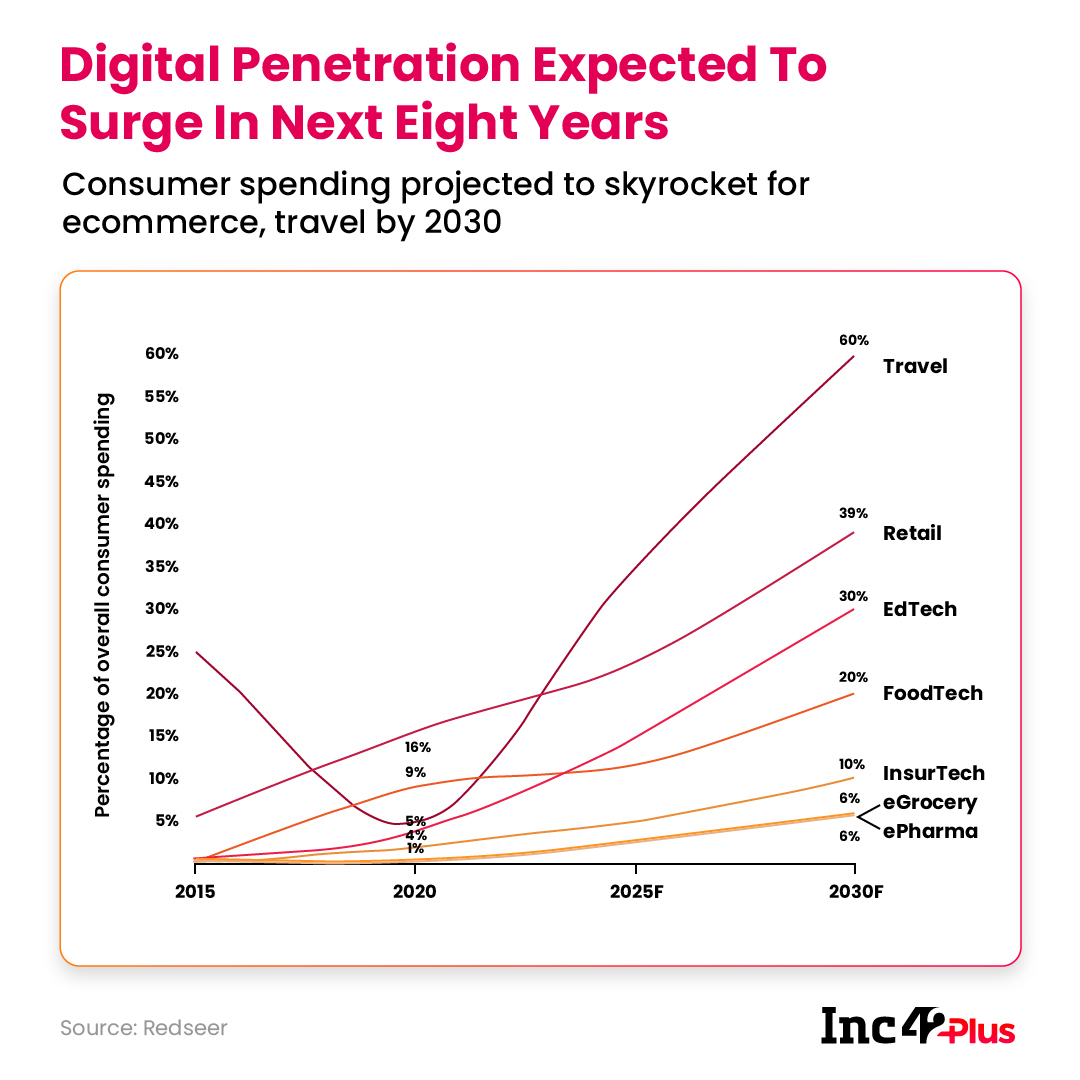 The digital economy has certainly made an impact in critical sectors such as financial services. The launch of IndiaStack and unified payments interface (UPI) has changed the game for the cashless economy, and opened up the fintech market for new and innovative models. UPI has set new records every passing month, and also expanded abroad — showing just what wonders a great digital product can do for a country’s economy.

As the internet user base expands, startups will play a major role in economic value creation. Internet penetration not only boosts business creation, but has a direct impact on GDP growth and allows more flexibility for companies — something highlighted by how startups were able to survive through the pandemic last year to reap the funding rewards this year.

As India emerges from the clutches of Covid-19, and begins its long ascent out of the worst economic slowdown in recent history, the significance of the internet will rise unabated. Without connectivity, citizens may not be able to avail basic services today — a smartphone or laptops are perhaps more important than a two-wheeler these days. From getting groceries to school and work life, the internet connection is the head of the household.

Nearly 60 Mn small and medium businesses are stepping into the digital era in light of the transformation brought about by the pandemic, leveraging SaaS tools and other business applications that have risen in prominence in the past year. Those small and traditional businesses that didn’t go digital are struggling to revive themselves. Without the internet, the pace of recovery would have been far slower, and contactless service delivery would have been nearly impossible.

Startups that cater to this surge in demand for online learning, digital financial services, software tools for small businesses and consumer brands have seen an unprecedented boom in funding in the past seven months. The top 120 startups in India have created a cumulative value of $225 Bn. India has seen 22 unicorns this year alone, which is double the total in 2020. The slew of internet company IPOs in India is another indicator of the rise of the internet to become big business. 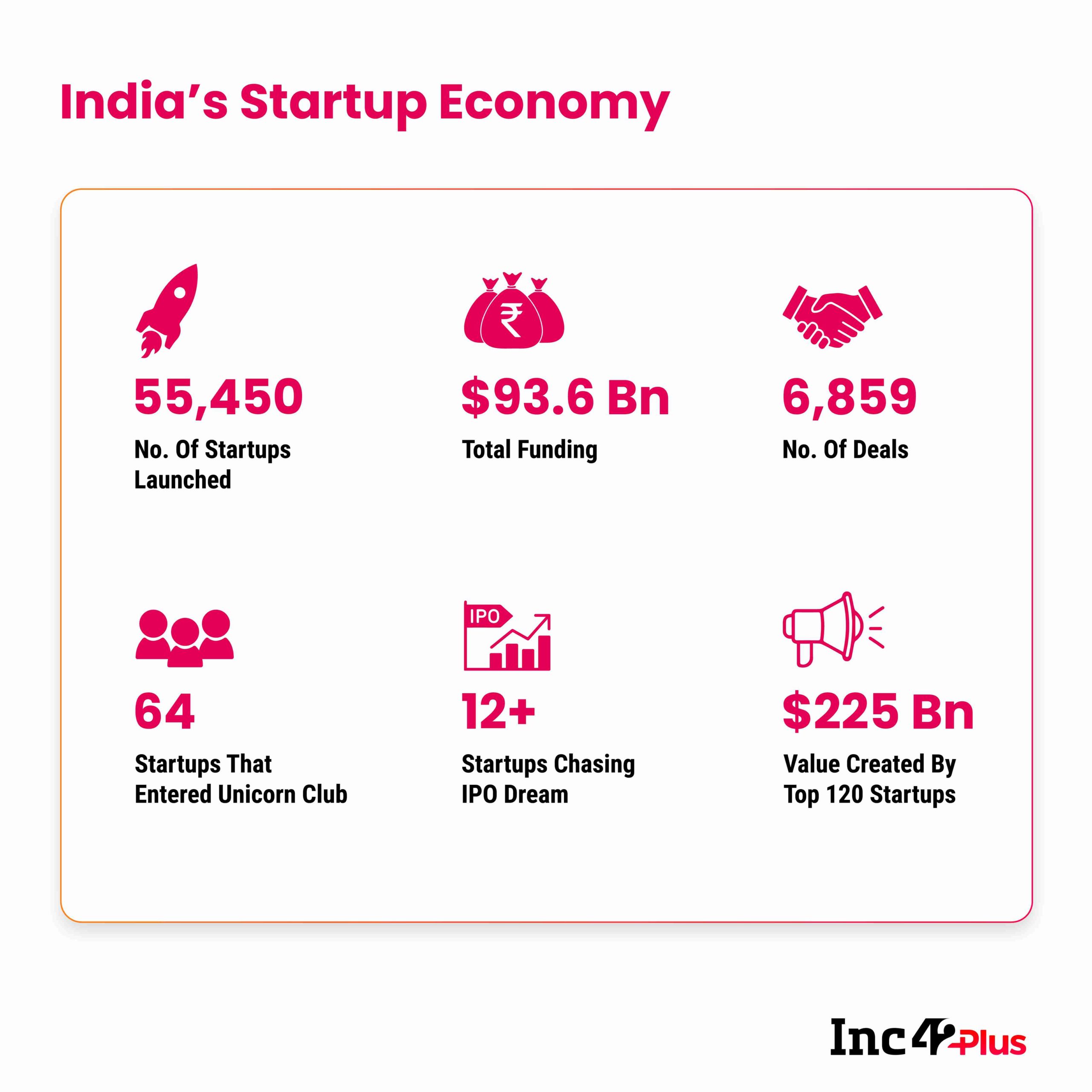 After Zomato and CarTrade hit the public markets with oversubscribed offers, companies such as Policybazaar, ixigo, Pharmeasy, Paytm, Nykaa, Fino Payments Bank and others are next in the queue in the IPO parade. This week, Zomato’s share price rose sharply after its first quarterly financial performance report after going public, bringing more value to its shareholders. This proves that internet companies can indeed aid in wealth creation, if they have their eyes set on eliminating hurdles in the path of sustainable growth.

When public money starts backing innovation in the internet ecosystem in a big way, it’s clear that the Indian digital economy has reached the next stage of maturity.

On the consumer side, digital and consumable products are being tailor-made for the more mature metro audiences as well as underserved rural Indian consumers — thousands of D2C brands have emerged and the ecommerce ecosystem is seeing an overhaul with live commerce, roll-ups and more models coming along. The coming-of-age of online grocery delivery in the past year is another example of how internet access and digitisation have changed the game.

A Free And Open Internet, Still A Dream?

While the internet has undoubtedly made India a more open market and society, the flipside is that the rapid penetration and the ubiquity of the internet has resulted in a digital divide that was greatly apparent during the lockdown last year and then in the subsequent months when everything went online. As supply chains were disrupted, millions were left stranded with no access to services or essential products. Then, even as individuals adjusted to the reality of work-from-home and online education, the fact that these required access to tablets, PCs or smartphones, meant many underprivileged groups were left out of the ‘new normal’.

Businesses and citizens have made the most of the rise of the internet, the Indian government and political powers have also leveraged it. Over the years, the Indian government has tried to bridge this gap through various measures and policies collectively known as Digital India, but the efficacy of these programmes is less than optimal, as we have noted in the past. Nevertheless, these policies have clearly improved the state of the internet in rural and semi-urban India to a large extent.

But governments past and current have also wielded the internet as a weapon to bring in law and order — the shutdown of internet services for nearly two years in Kashmir being the biggest example. India suffered a loss of over $2.8 Bn due to such internet shutdowns, the most among 21 surveyed countries, as per a report by Top10VPN. Indians suffered over 8,927 hours of internet blackouts or restricted bandwidth access, which was also the highest in the world in 2020.

Amid a geopolitical standoff with China, the Indian government focussed on national security to ban over 200 apps of Chinese origin, which boosted the prospects of Indian internet platforms. But the recent case of alleged snooping on political rivals through the WhatsApp-Pegasus tool, the controversial IT Rules, 2021 for social media and online content, and other policies have prompted questions about the approach of providing internet access without enabling digital literacy or empowerment. The fact that social media is such a pivotal tool in the political theatre only underlines how critical the internet is for all work and life in India in 2021. So those in power cannot ignore questions on digital divide and literacy for much longer.

All this tells us is that the internet can be wielded as a weapon of division or surveillance, as well as a platform for self-empowerment and unity. Data privacy is still not a cornerstone in many of our laws pertaining to the internet and the rampant misuse of customer data is a problem that startups are being forced to solve without any guiding framework. Finding the delicate balance will be the most critical challenge for India’s future — as an internet nation, we are still young, but growing fast, so there will be more growth pains.

India has so far focussed on ease of doing business, whereas the freedom to do business, to build startups in innovative sectors has been somewhat stifled. The fear is that businesses might pull away from regulation. But like we trusted the internet to be a force for freedom and good in the early days, the need today is to trust technology and give startups that same freedom.

The journey ahead for internet in India could very well shape its future globally and the geopolitical ramifications contained within that ecosystem. Will India continue to lean towards the open market, which has been its hallmark so far, or will the future of the internet be increasingly closed and therefore, less free?

Playing safe is the biggest risk in the startup ecosystem