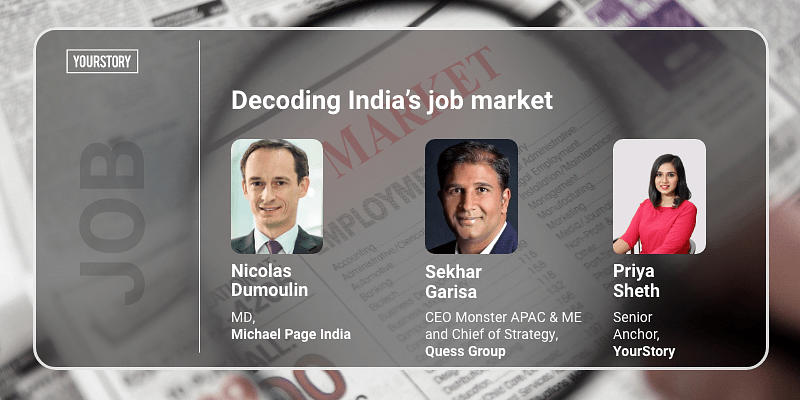 India’s job market took a massive hit in the wake of the COVID-19 pandemic. Barely had the dust settled when the country was ravaged by the second wave. Sales nosedived, losses climbed, and businesses shut down, leading to a spike in unemployment rates.

According to Naukri.com’s monthly index, hiring activity declined by 15 percent in April 2021.

Now, with the economy starting to get back on its feet, certain “green shoots” are being noticed in the hiring scenario. According to Centre for Monitoring Indian Economy (CMIE), the unemployment rate declined to 9.2 percent in June, 2021 as compared to 11.9 percent in May, 2021.

Nicolas Dumoulin, MD, Michael Page India, says “very strong activity” was seen in the job market in the beginning of the year. The second wave did temporarily restrict some of the activity but there has been good recovery in the last couple of weeks.

“This is one of the strongest markets I’ve seen in the white-collar mid to senior-level hiring in the last eight to nine years I’ve been in India,” Nicolas says.

Sekhar Garisa, CEO, Monster APAC & ME, and Chief of Strategy, Quess Corp, believes that the second wave impacted the job market but companies have “handled it better this time as compared to the first wave”. Significant increase in hiring trends was noticed, especially in the mid to senior level.

“Even though second wave was more acute, hiring plans haven’t been impacted as badly,” Sekhar says.

Nicolas says new age-businesses are showing a very strong possibility of growth, specifically on the tech side. A number of international companies are also ramping up tech capabilities, indicating the industries are transforming and transitioning to be more tech-oriented. On the other hand, traditional industries, which came to a halt last year in terms of hiring, are looking better.

He adds that there are huge disparities in salary increments and structures in terms of industries and functions.

Technology-driven sectors have higher salary trends – with increments rising to 40-50 percent, especially in Bangalore – as compared to other sectors as these jobs are in great demand.

“The buoyancy in the tech space, more specifically in Bangalore, is at levels that not so healthy,” Nicolas says.

According to Sekhar, there is no better time to be a techie in India than now. But, it is “unhealthy” as it brings in “wrong expectations” and there is a need for a certain balance as compared to sectors that have not seen increments and/or have witnessed salary cuts.

Shekhar says IT, software, healthcare, and manufacturing sectors are showing significant uptake for demand. “We are 7 percent up from last June.”

Normalcy has not returned to the travel, tourism, and retail sectors. Similarly, offline education has not seen much improvement as opposed to the edtech space, which bloomed tremendously during the pandemic.

Fresher hiring increased in June by 6 percent and job rebounds have been good in Tier I cities but not so much in Tier 2 cities, possibly because of emerging trends in the remote working space.

Tracing the path of the blue-collar economy

Nicolas says the blue-collar economy has been heavily impacted due to factors like supply chain issues, issues on constructions sites, workers moving back to their hometowns, etc. There have been significant disruptions but the economy will bounce back as the situation improves.

Sekhar feels the blue-collar workforce could easily do two-three jobs, and there is ample space for mobility.

Workers can move towards warehousing, logistics, and delivery from sectors where the demand has reduced. Hiring of blue-collar workforce is moving towards digital platforms as the workers are looking for hyperlocal jobs, based on their convenience.

The current focus is on multiple skill sets that can be leveraged to get jobs. Companies are wanting to pay for task and outcome instead of time. These and other such new trends will pave the way for the new normal.

“The true test for us is going to be the peak season, which is in a couple of months. We are all hoping that by the festive season the numbers would look robust,” Sekhar says.

Sekhar adds that the movement of people into different markets has reduced, and there is a high demand for local talent in places like Singapore, Middle East, etc. as no more employment passes have been generated in the last few months.

With “remote working” and rise in demand for top-tier talent, work mobility is blooming and there is a significant uptake in global hiring.

A ray of hope

Nicolas concludes by saying that he hopes 2021 will be the best year for the hiring industry, adding that a lot will depend on the long-term focus of hiring in terms of how the economy is transforming.

Sekhar agrees, stating that there will be a huge amount of activity due to increasing requirement and that he is “very optimistic about the second half of the year”.

Everything You Should Know About Gold IRA Companies

Can Polestar succeed where other EV maker SPACs have failed? – TechCrunch