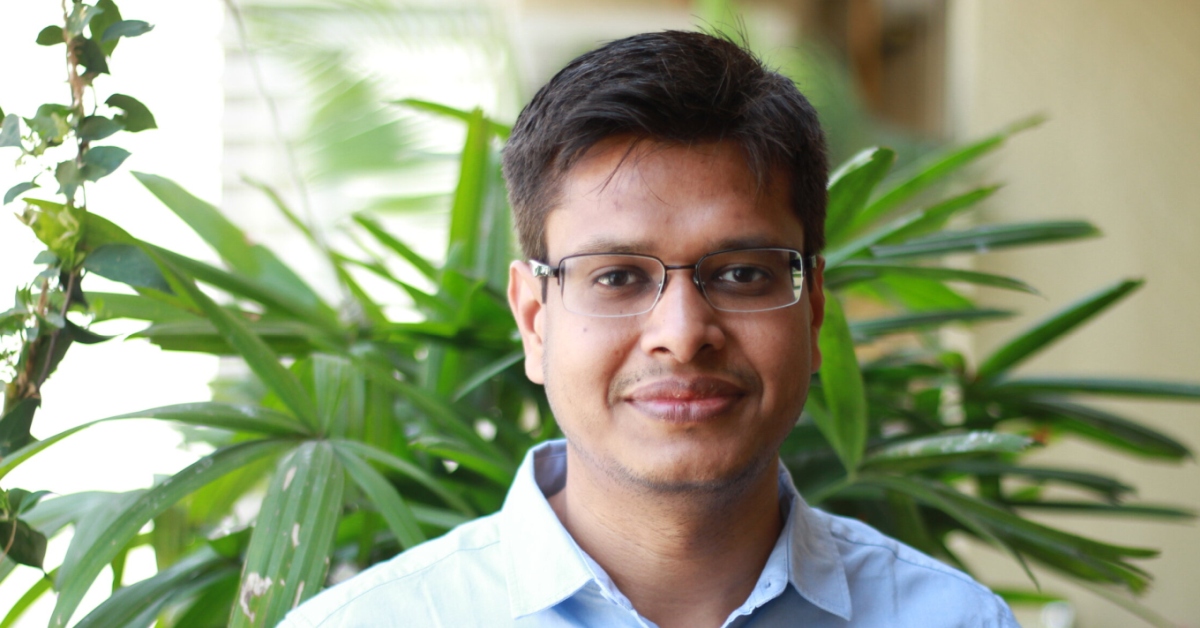 Banks certainly have the experience, and they have tried to go digital, but for Gupta, the DNA of a startup is something that cannot be replicated. Having founded CitrusPay and then exited the company when it was acquired by PayU for $130 Mn, Gupta is looking to make a dent once again in the fintech ecosystem with neobank Jupiter.

The startup started out with a bang with raising $24 Mn in its seed round in 2019 from the likes of Matrix Partners, Sequoia, Greyhound, 3one4 Capital and others. Since then, it has raised another $2 Mn round when it came out of stealth last year. These two rounds for the neobank naturally attracted the attention of the fintech ecosystem and market observers. Even before the product launch, Jupiter had got as much funding as most startups may not see until their growth stage. Even for a second-time entrepreneur, this was surprising — so what is the whole deal?

As he prepares for the Jupiter launch for select early customers tomorrow (June 24) with a wider rollout in the first half of July, Gupta says the vision was to build a customer-first bank. That’s something that every bank typically claims when it is starting out, but for the founder, this means a bank that moves to the beat of its customers, rather than an opaque institution, which is what traditional banks are, despite their tall claims.

The startup has already seen close to 40K individuals signing up for the waitlist for its launch. While it’s too early to talk about revenue, the target is to reach more than a million customers in a year’s time.

Jupiter: Building A Neobank In The Open

Big banks provide an array of services, but they are largely either one-size-fits-all or costly for retail customers. Plus, most consumers or retail bankers don’t know how to utilise the array of financial services offered with their bank account.

According to Gupta, Jupiter tackles these challenges in different ways. No one really knows what features or services a traditional bank is working on — that’s different at Jupiter, which is building in the open. Anyone can view the neobank’s current priority areas, suggest new features, and pass on constructive feedback to the product team on the open project on Trello.

Gupta says he personally wades into discussions on features with prospective users, trying to see why customers are asking for one feature over the other. These are the users who are getting early access starting tomorrow.

The other major difference is in the way Jupiter deals with customer goals, unlike a bank, where the activity of savings is not linked to outcomes. “The approach we are taking is the finance app approach, where the financial goals for a consumer are very personalised and contextual. So you can’t operate a one-size-fits-all approach. And this is where our larger vision is — how do we make some people reach their financial goals and be their guide for financial discipline, which generally is the biggest problem today, anywhere in the world,” the neobank’s founder and CEO adds.

The problem is magnified in India because Indians are not educated in managing finances or maximising their wealth at an early age. Most young adult and adolescent Indians are focussed on getting the right school education and finding a high paying job, and this lack of financial acumen is exploited by banks.

“Today, banks and consumers are counter to each other in the way they operate. A consumer wants to make more returns, take fewer loans, make more investments, and get the best insurance. But the bank wants to keep more idle money in the accounts and wants to sell more loans, pushing the consumer down a debt trap.” – Neobank Jupiter founder Jitendra Gupta

Gupta adds that the problem is not that there are very few good banks in India, but that the right guidance is lacking. Most banks are focussed on making money and profits, but that is immaterial to the consumer. “I see the consumers getting smarter about their choices, aspiring for better service and better experience on managing their money. They are evolving towards ‘How do I get control of my finances, rather than being guided by some dumb relationship managers’,” says the founder. 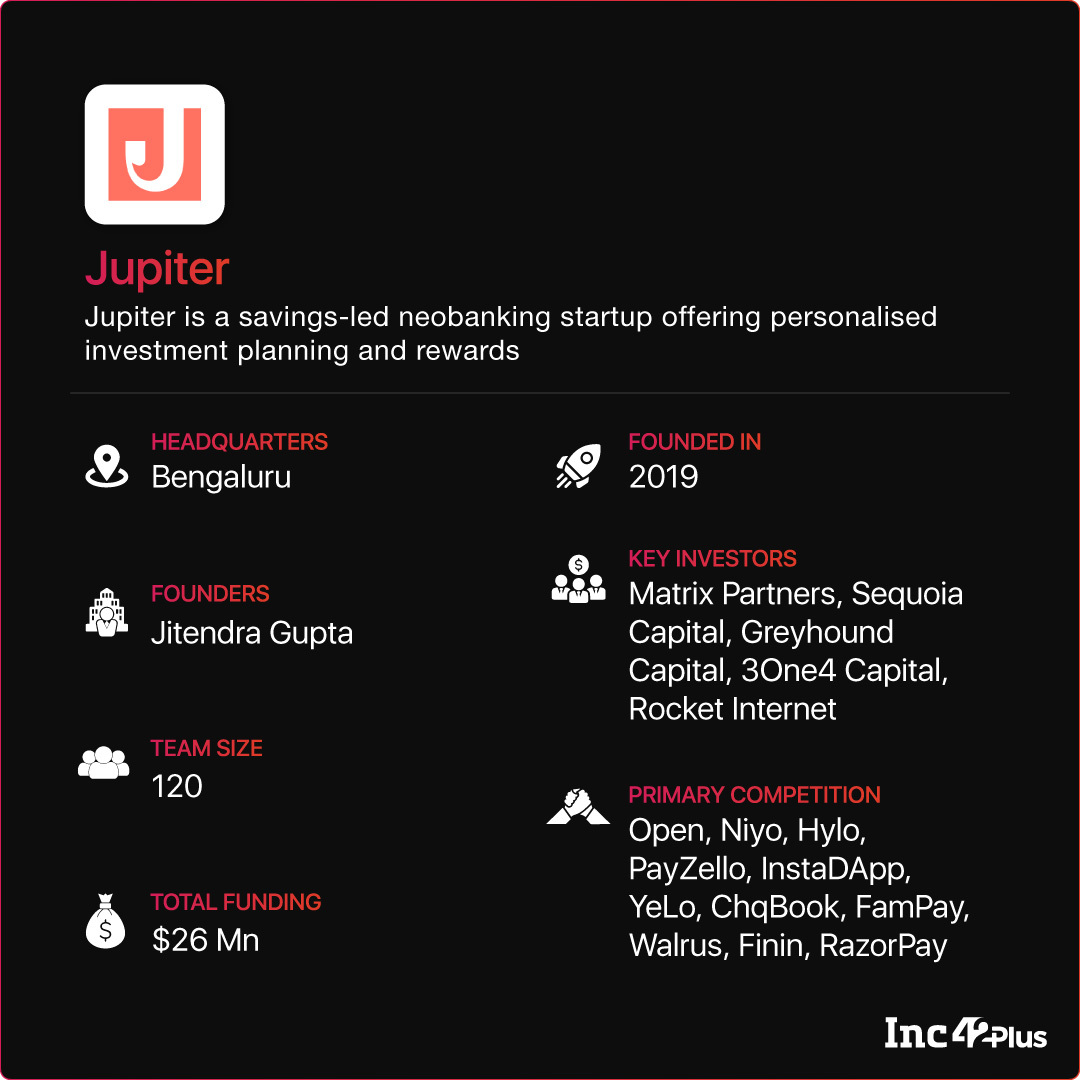 Changing The Standard Of Banking

The changing consumer perception of banking has seen a slew of startups venture into neobanking services, with most of them primarily targeting business users rather than retail customers. Besides Jupiter, more than half a dozen neobanks are currently operational in India looking to disrupt the BFSI sector, including key players such as Open, NiYO, Hylo, PayZello, InstaDApp, YeLo, ChqBook, FamPay, Walrus, epiFi, Finin and RazorPay X among others.

Many of these neobanks have grabbed significant market share as well. For instance, Open — backed by Tiger Global, 3one4 Capital and Beenext — claims to have more than 500K customers (December 2020) and claims to process $15 Bn-plus in annualised transactions. Niyo, which has tied up with Equitas Small Finance Bank, claims to have more than 2.5 Mn users overall, but how many are using its digital savings bank account is unclear. Many of the neobanking startups are focussed on NRI banking, SME banking and corporate accounts for startups, whereas Jupiter’s focus would be on retail or consumer banking, where there are plenty of pain points.

In the first phase of the launch, customers will be able to get access to a bank account, the ability to aggregate their finances on the app, the ability to use UPI and a transparent reward system with discounts for app partners as well as cashback on spending.

Customer service is one area where Gupta says Jupiter is looking to set itself apart. He believes the standard of banking customer service has fallen in the past few years, despite fancy relationship manager positions being created at banks. The customer service experience is exactly like Swiggy or Zomato, Gupta adds, where customers can simply send a message to either block cards or activate features.

Like other neobanks, Jupiter has tied up with traditional banks — Axis Bank and Federal Bank  — to offer banking services such as loans or investment planning. India’s banking regulations mean that neobanks cannot offer banking and financial services autonomously. They have to partner with an entity that has a banking licence and can then offer services in partnership with these banks. Other neobanks have a lot more bank partners — Open claims to work with 15 banks — but Gupta says the company is more than happy with just two banks.

Fintech in India is joining the mainstream from the periphery of the BFSI industry. This month’s PMC Bank acquisition by BharatPe and Centrum and the Groww acquisition of the IndiaBulls AMC business last month hint at the shifting banking landscape. Are fintech neobanks ready to dethrone traditional banks?

Gupta says India has similar demographics and market conditions to markets such as Brazil where the stronghold of the big banks has been challenged by neobanks such as Nubank. “We are seeing more collaboration and more openness by banks and regulators to work with fintech startups. Even if you look at the Western world, or even Latin America and Brazil with Nubank, which started in 2014 and in six years, it has come to a position where Nubank is seeing one in every two new accounts opened.”

The company will integrate its buy now pay later (BNPL) product Bullet into Jupiter, along with the portfolio analysis that it currently offers. Beyond savings and personal finance management solutions, Jupiter has plans to offer services such as credit cards and more in the future.

As for the runway, Gupta says the company has enough in the bank for the next 30 months — close to $20 Mn is leftover from its funding round. And while there are no plans to raise new funds at this point, investors may well come calling if Jupiter is able to prove its hypothesis around customer-first banking.

CBDC Will Be Launched Before Crypto Bill Gets Enacted