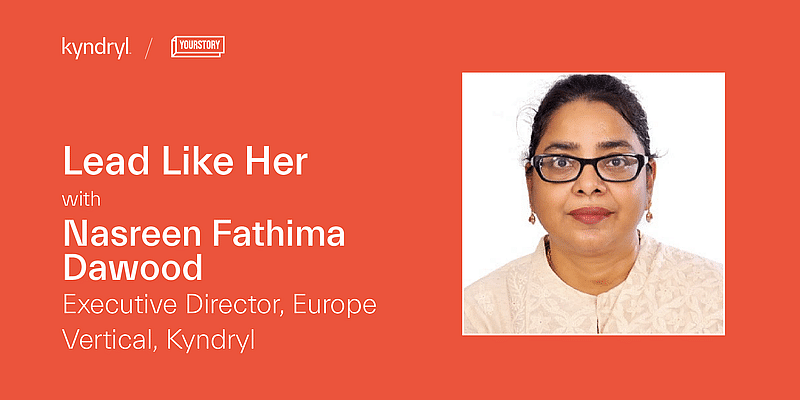 “When I was joining Kyndryl (when it was still a part of IBM), my hiring manager told me that you’ll be running the infrastructure that is the backbone of the world’s economy. So, are you up for the challenge? And, that was it! It was an offer I couldn’t refuse,” says Nasreen Dawood, Executive Director – Europe, Kyndryl.

A movie buff who loves quoting dialogues and dropping references from her favourite films, admires Akshay Kumar for being a self-made star, and wants Alia Bhatt to play her in case there’s a movie made on her life, Nasreen’s lively persona and go-getter attitude makes her a role model for many aspiring techies.

Nasreen describes herself and her 25-year-long professional journey as bold, grounded, and innovative. She credits her personal and professional growth to the environment at home and her lifelong zeal for learning.

In a freewheeling conversation with YourStory, as part of the ‘Lead like her’ series that spotlights women in leadership at Kyndryl, Nasreen shares more about her early years, professional milestones, and more.

From an aspirant teacher to becoming family’s first engineer

Coming from a family of teachers, Nasreen believes both her grandmothers (who were teachers) were instrumental in shaping up her personality. She learnt to be grounded and understood the significance of hard work.

Her early experiences drew her to teaching, and this is a trait that has stayed with her, even today. Her ideas of making a difference by imparting knowledge to others kept her invested in her studies, until she had a conversation with one of her teachers, when she was only 15.

“While discussing the possible career paths I could explore, one of my closest teachers convinced me to choose a field that was not considered a safe career for women. She asked me to explore my strong mathematics and science skills. Around the same time, I had some friends who had planned to do engineering. I have always been someone who wanted to break stereotypes. The biggest push for me was that decision would make me the first engineer in my family,” Nasreen tells YourStory.

When Nasreen told her parents about her decision to pursue engineering, they were a little concerned because “at that time, such avenues were still opening up for women, and it [girls pursuing engineering] was still unheard of”. Since most of them were involved in teaching, they wondered if it would be safe for her to step into a world that was largely male-dominated.

“My mother was extremely supportive, and went on to say that I could do anything, as long as I was sure. When I became the first engineer of our family, it was a proud moment for all of us,” she shares with YourStory.

Nasreen’s first stint was at a firm that dealt with IT infrastructure services. While everyone thought it would be difficult for her, she not only enjoyed it but it also became a defining moment of her life as she was reassured that building and running IT infrastructures is her calling.

Another crucial moment for her was the wide appreciation she received for one of her projects at Wipro (where she worked from 2002 – 2009). The experience made her realise that building and managing client relationships is one of her strengths.

Today, Nasreen handles the Europe vertical for Kyndryl, building 24×7 IT infrastructure solutions for some of the most important and largest companies. Among some of her marquee projects is when her team helped one of the largest banks in Europe to transition to Kyndryl’s cloud and other IT solutions.

“One of my role models, Sheryl Sandberg, has said that you need to get your hands dirty when you build something of your own. I think that’s something that keeps you grounded and keeps the passion intact,” she adds.

Giving back to the community

As someone who believes her career is a marathon, Nasreen constantly looks for ways to invent and reinvent herself. “I have always worked towards building my technical, business, financial, and interpersonal skills. I think a wholesome growth is very important,” she says.

In addition to mentoring girls and aspiring professionals, Nasreen believes that organisations should realise that “investing in building their people and communities will be the lifeline of the future”.

“Kyndryl has invested in the skill transformation of people, and also has some great diversity and inclusion initiatives that help women move forward in their careers. There are targeted dimensions like IT architects, IT specialists or client relationship managers. There is a lot of investment that happens to help women grow in an organisation, but the woman also has to seize these opportunities. At the end of the day, it is also less about gender and how you showcase your work,” quips Nasreen.

As her closing thoughts, Nasreen talks about becoming more aware in this 25-year-long journey. “The difference between me and the girl who became her family’s first engineer all those years ago is that today, I have realised the power of community and the power of giving back … and that girl back then had several role models and today, she is a role model herself,” says Nasreen with big, endearing smile.

Inside Flipkart’s Leap programme: the experience, learnings, and the path ahead