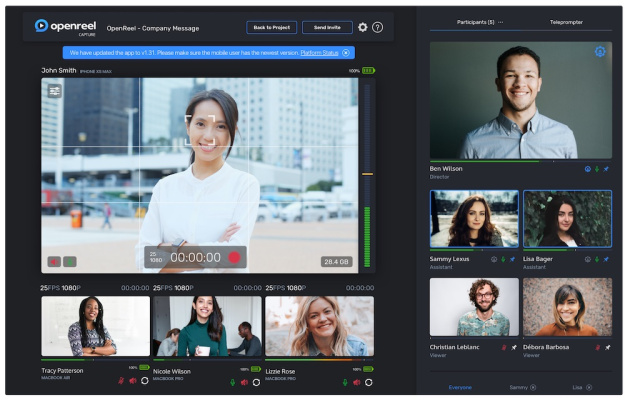 OpenReel, a startup that makes it easier for teams to record videos remotely, has raised $19 million in Series A funding.

CEO Lee Firestone told me that he and CTO Joe Mathew first started a video agency together, but when they were given “a pretty significant project” that involved remote production, they weren’t satisfied with any of the existing solutions and ended up “spending over a year to build this technology.”

Of course, there are plenty of teams that have figured out their own approach to remote video production, particularly in the past year. (Here at TC, it has mostly involved shipping cameras and lights to writers, followed by lots of tech troubleshooting conversations.)

But OpenReel’s “remote camera” technology is supposed to make the process much simpler, while also giving production members more control. The software allows a remote director to control a webcam or mobile device, along with up to four people recording and four people viewing the shoot in real time. The footage (which can be 4K quality) is stored locally, then automatically uploaded after the shoot. And it supports additional features like a teleprompter.

“If you talk to our clients … they would have had to put together multiple different pieces of technology, shipping or not shipping things, and even with all that, they would not have gotten the quality and seamless experience for both sides,” Firestone said.

Not surprisingly, demand grew dramatically in 2020, with Firestone recalling that the platform went from supporting “thousands of video shoots a year” to “10 or 20 times that.”

In fact, the company said that annual recurring revenue has increased 12x over the past year as clients like Dell, HubSpot, ViacomCBS and TC’s parent company Verizon Media have used it to record things like marketing videos, internal communications, customer testimonials and more. It has more than 200 enterprise clients, as well as “hundreds” of small and medium business customers.

“There’s been a pent-up demand for content in these organizations that our technology … unlocks,” Firestone said. And he doesn’t anticipate that changing as in-person filming becomes safer post-pandemic.

The Series A comes from Five Elms Capital, bringing OpenReel’s total funding — debt and equity — to $23.9 million. Firestone said the money will allow the company to develop new product features (one possibility: support for livestreamed videos, rather than just pre-recorded footage), as well as continued global growth, after an international push last year that saw the platform launching across 125 countries.

“Five Elms loves investing in businesses that challenge the old way of doing things, and OpenReel does just that,” said Five Elms’ Thomas Kershisnik in a statement. “OpenReel has proven itself as an important component of the remote technology stack as well as a vital tool in the broader content creation toolbox empowering enterprises to enhance their content and create more of it.”

Early Stage is the premier “how-to” event for startup entrepreneurs and investors. You’ll hear firsthand how some of the most successful founders and VCs build their businesses, raise money and manage their portfolios. We’ll cover every aspect of company building: Fundraising, recruiting, sales, product-market fit, PR, marketing and brand building. Each session also has audience participation built-in — there’s ample time included for audience questions and discussion. Use code “TCARTICLE” at checkout to get 20% off tickets right here.

Eternal An Internal Identity; No Plan To Move Away From Day-To-Day Business: Zomato