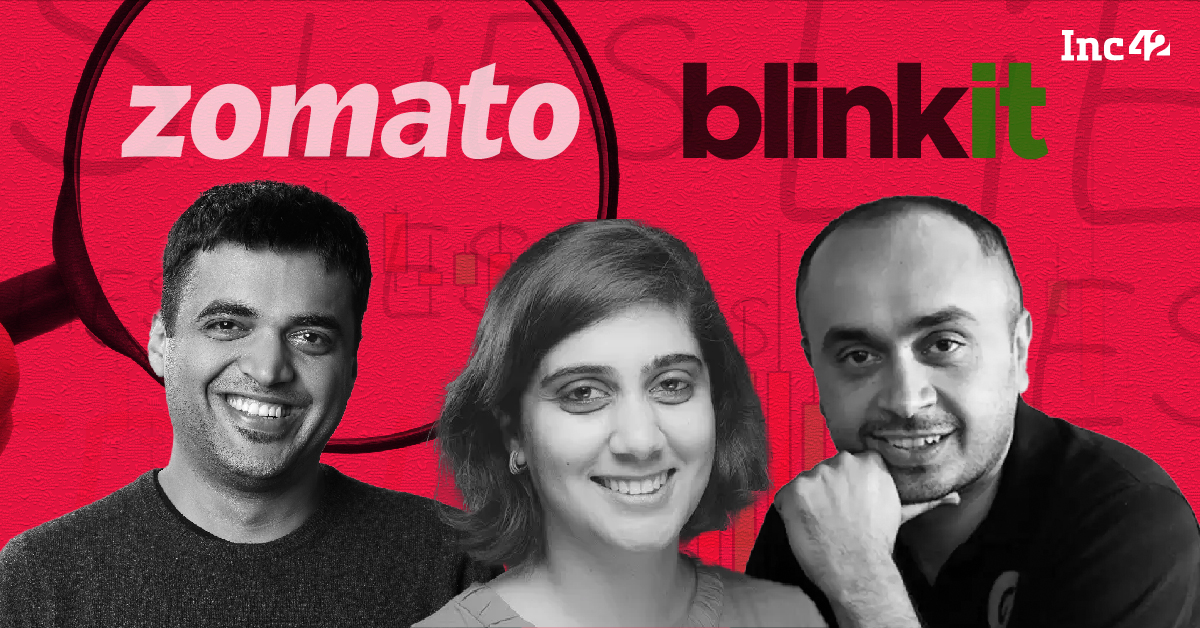 While making the announcement of the deal, Zomato failed to disclose the relationship between one of its cofounders and the acquired company

The conflict of interest is around Zomato cofounder and chief people officer Akriti Chopra, who is married to Blinkit cofounder Albinder Dhindsa

The different definitions for KMP under SEBI’s regulations and the Companies Act, 2013 have given rise to some confusion about who is considered a KMP

While Zomato has been quite bullish about the Blinkit acquisition and the potential to grow the quick commerce business, a number of investor concerns — from late disclosures to conflict of interest — have complicated the matter.

The latest controversy related to conflict of interest and lack of is one that has already been brought up in light of Zomato’s 2021 investment in Blinkit (at the time known as Grofers). The conflict of interest is around Zomato cofounder and chief people officer Akriti Chopra, who is married to Blinkit founder Albinder Dhindsa.

The allegation is that while making the announcement of the deal, Zomato failed to disclose to regulators the relationship between one of its cofounders and the acquired company.

Many have questioned whether such a deal should have been signed in the first place without informing the regulators about the nature of this relationship. But beyond that the question arises over whether Chopra is indeed a key managerial personnel (KMP) as per the definitions under the Companies Act, 2013 and the SEBI Listing Obligations and Disclosure Requirements (LODR).

Chopra was elevated to the position of cofounder from the erstwhile CFO position ahead of Zomato’s $1.1Bn IPO in July last year. Now a chequered year later, in a recent BSE filing on Tuesday, August 2, 2022, Zomato clarified the conflict of interest allegations, the Deepinder Goyal-led company did not mention Chopra as being a cofounder.

The company claims “Akriti [Chopra] is neither a director, or key managerial personnel (KMP) as defined under the Companies Act, 2013 and Listing Regulations nor is she a person in accordance with whose directions or instructions the Board of Directors is accustomed to act. Additionally since the inception of the deal, she was and continues to remain the Chief People Officer of the Company and this transaction had no overlap with her role.”

However, many have pointed out that this is a direct contradiction of Zomato’s red herring prospectus filed with SEBI on July 06, 2021, where Chopra is mentioned as a KMP multiple times. She is the second name in the section about the Zomato KMP and she is also listed as one of the KMP that have received stock options.

That’s because of the different definitions for KMP under SEBI’s Issue of Capital and Disclosure Requirements (ICDR) which governs filings such as a pre-IPO red herring prospectus and the SEBI LODR, Companies Act, as highlighted below. Put simply, the ICDR takes a wider view of what a KMP is. It requires the company to notify the regulators about most of the function heads in an organisation. On the other hand, the Companies Act and LODR have a narrower definition, by which Chopra might indeed not be a KMP.

However, the LODR and Companies Act do leave some room for discretion for boards and management to appoint KMP outside the prescribed designations As the below extract from the Companies Act highlights, “such other officer as may be prescribed.”

Zomato announced the Grofers investment in August 2021, less than one month after listing on stock exchanges. Even then it had not mentioned Chopra’s relationship with Dhindsa in these filings.

On July 23, 2021, when Zomato listed on the stock exchanges, the LODR regulations got triggered and as such it had to notify the regulators about any changes to its KMP. However, no such filing has been made by Zomato till date.

In response to questions related to the filings for appointments of KMP, a Zomato spokesperson said,

“We strive to be an organisation which is transparent, humble, and curious – and we appreciate all questions which help us be any of that.

For all our investments, including Blinkit, we undertake a rigorous diligence process where we engage top legal and accounting firms. The Company then considers the findings before deciding to make such investments.

We have and will continue to make appropriate disclosures to the authorities as per the applicable laws and sometimes even voluntarily, beyond what is required of us, keeping in mind the corporate governance standards we uphold for ourselves.”

Are Cofounders Not Key Managerial Personnel?

Chopra has been with Zomato since 2011 in various positions starting with senior manager, finance & operations, before being promoted to VP of finance & operations in September 2012. She was appointed as the CFO in April 2019, and replaced by Akshant Goyal in October 2020, when she was named the chief people officer.

While announcing her elevation to the cofounder position, Zomato CEO Goyal wrote in an internal email circulated to employees on June 9, 2021, “Tuki (Akriti, I know this doesn’t mean much to you, because you have always been a founder at Zomato. Sometimes more than me, but never less than me. Thank you. Congratulations for now officially being a founder at Zomato.”

Responding to other questions related to Chopra’s role as the chief people officer and potential conflict of interest arising from this position, a Zomato spokesperson said, “As the Chief People Officer, Akriti has the responsibility of ensuring fair compensation for all employees. However, the compensation review for all senior management personnel, is handled by Deepinder [Goyal], and is also subject to review of the Nomination and Remuneration Committee and Board of Directors of the Company as per the provision of the Companies Act, 2013 and LODR Regulations. Albinder’s compensation after the completion of the acquisition is not going to be under Akriti’s influence or purview.”

The company claimed that Chopra has waived her compensation for three years starting January 01, 2022, and that Dhindsa also does not draw a salary from Blinkit for his role as founder and CEO. Zomato did not respond to further questions around non-cash compensation for either Chopra or Dhindsa.

It also did not clarify why it had not notified SEBI or the stock exchanges about any board resolutions for appointment of KMP at the board’s discretion, as required by SEBI’s LODR.

In its shareholder letter dated August 1, 2022, Goyal stated, “The relationship between Albinder and Akriti/ I is public and already known – there was nothing to hide there. The board was aware of it and all parties, including Akriti herself, made sure that she was never involved in any discussions or decisions with respect to the transaction.”

Zomato claims EY and Morgan Stanley were consulted in the deal making, whereas law firm Saraf & Partners advised the company on the Blinkit deal in the context of related party transaction. The company did not share these findings with Inc42.

While the definitions for KMP might indeed differ in the pre-listing compliance and post-listing regulations, the exit of key leaders in a company — even outside the purview of the KMP — may affect the sentiment of shareholders and therefore is price sensitive for the stock.

Corporate lawyers that we spoke to believe that startup and new-aged tech companies could face questions and inquiries from stock exchanges and SEBI in the future, if investors continue to raise these questions. Startups that list need to shed their maverick approach to compliance and think of it as a serious matter because they are now answerable not to private investors but the general public as well.

One potential way for startups to navigate this in the future would be clearly stipulating the KMP after the public listing of the company in the RHP or other pre-listing filings. This would help investors get a clearer view of which KMP is material from the point of view of price and impact on business.

The Other Conflict Of Interest Question

Incidentally, besides Blinkit, Zomato also invested in Magicpin, Shiprocket and Curefit in August and September 2021 and CEO Goyal was cornered by conflict of interest allegations since he had previously invested $100K in logistics tech startup Shiprocket in an earlier round in January 2021.

He had to send out a statement clearing the air, claiming that he had exited his personal investment in Shiprocket at zero profit/loss before Zomato invested in the company.

And now the Blinkit situation has once again raised questions about whether Zomato has indeed learnt its lesson from these past concerns around timely and complete disclosure.

Already several retail Zomato shareholders wrote to the Securities and Exchange Board of India (SEBI) about the late disclosures by Zomato in relation to the Blinkit acquisition. Investors said that they suffered losses because of the late disclosure.

The food delivery unicorn had informed the stock exchanges on June 24 that its board had approved the acquisition of Blinkit for INR 4,447 Cr ($568 Mn). But Investors said that the deal for Blinkit had been speculated in the press for several weeks before it was actually announced.

Investors complained that Zomato neither confirmed nor denied the unofficial reports, which had an adverse impact on its stock price. Within a week of the deal’s announcement, Zomato’s shares tanked and hit an all-time low last week before recovering after the company’s Q1 FY23 financial reports.

Zomato’s first year as a public company has certainly brought about plenty of food for thought for Goyal and the management. The Blinkit acquisition has been under the spotlight not just due to these conflict of interest issues, but also the fact that a loss-making Zomato is buying another loss-making entity.

Earlier this week, reports said that Zomato is looking to adopt an umbrella structure under the name Eternal in the near future with different CEOs for each vertical (food delivery, Blinkit and Hyperpure). The feeling is that this new structure is likely to help the company focus on each vertical’s profitability and unit economics more sharply in the long run.

But even this internal announcement of the ‘Eternal’ future for Zomato and its sister companies has attracted the attention of SEBI as well as the BSE and NSE. Clarifying the problem, Zomato told the exchanges, “Zomato believes that the internal communication is not material and does not mandate any disclosure.”

But surely the fact that the internal announcement was leaked soon after in reports merited Zomato coming out ahead of the issue. In the past we have seen Zomato react sharply and quickly to social media controversies, but the same alacrity is somehow missing when it comes to regulatory disclosures.

Investors and those looking at Zomato’s stock would hope that the move to an umbrella entity under Eternal will also include a clearer process around disclosures and compliance.

Travel by Exchanging Homes for Free With 48 dots

ah! Ventures Sets Up A $14 Mn Angel Fund To Back Early-Stage Startups

How India is becoming the land of rising Super Apps