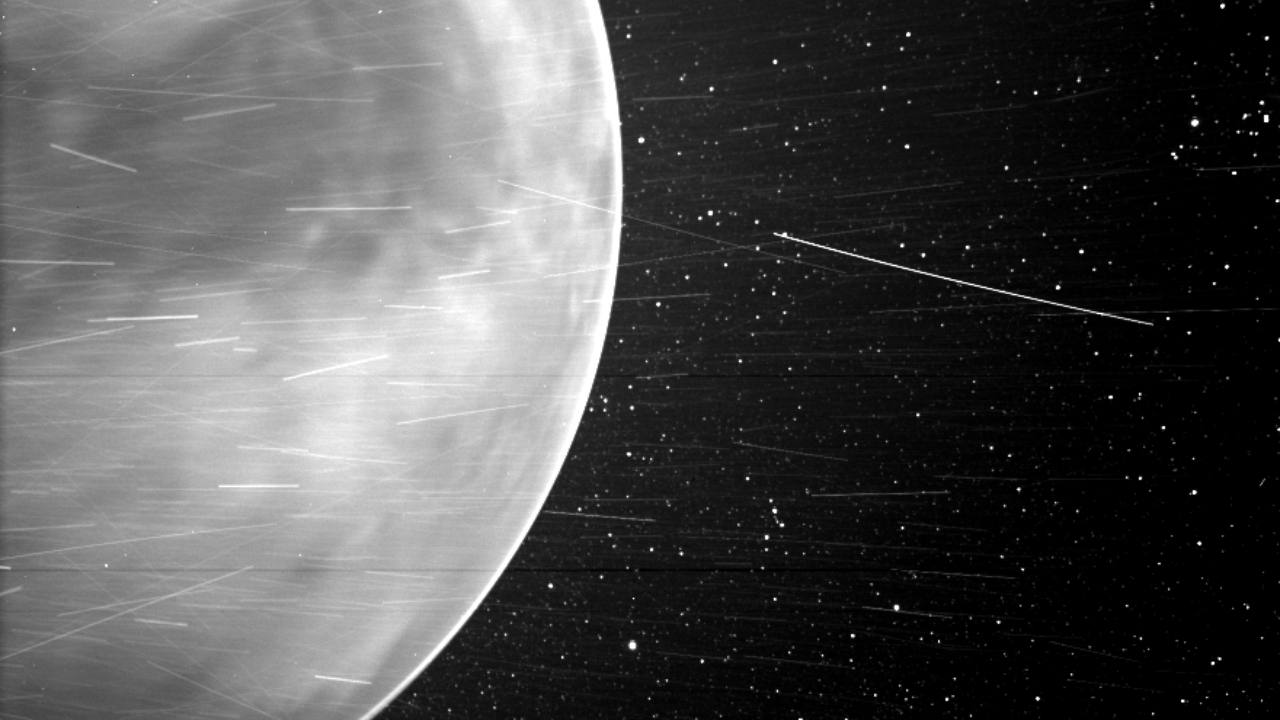 The Parker Solar Probe designed and sent to space by the National Aeronautics and Space Administration (NASA) has sent back some new pictures of the planet Venus. These capture Earth’s near-neighbour during nighttime, a rarely witnessed sight. The Wide-field Imager (WISPR) on the probe took the pictures as it approached Venus on 11 July 2020, according to the NASA release. Though the probe’s main subject of study is the Sun, it is going to make seven fly-bys of Venus during its seven-year mission. To reach the Sun, the spacecraft is using the gravity of Venus to change its orbit. The images released were captured during the third such manoeuvre, in July 2020.

The WISPR camera caught an illuminated rim around Venus, which scientists think is nightglow, or the light emitted by oxygen atoms high up in the atmosphere as they recombine into molecules in the absence of sunlight. The picture also gave a clear look into Aphrodite Terra – the largest highland region on the Venusian surface, the dark feature at the centre of the picture. The dark spot visible on the lower portion of Venus is not an object but an artefact from the WISPR instrument. When flying past Venus in July 2020, Parker Solar Probe’s WISPR camera, detected a bright rim around the edge of the planet that may be nightglow. Bright streaks like the ones seen here are typically caused by a combination of charged particles (cosmic rays), sunlight reflected by space dust, and particles of material expelled from the spacecraft’s structures after impact with those dust grains. Image: NASA

In a blog post, NASA said that bright streaks in WISPR, like the ones seen here, usually are caused when many charged particles, reflected sunlight, and particles from the spacecraft as it strikes dust grains, come together. That said, experts are still studying the exact origin of the streaks in this particular case.

Angelos Vourlidas, the WISPR project scientist from the Johns Hopkins Applied Physics Laboratory (APL), said that the image took the team by surprise. WISPR has been designed to take images of the solar corona and inner heliosphere in visible light but when it captured the Venusian surface, the scientists had expected to only find clouds. This means the instrument was able to capture near-infrared wavelengths of light, which can come in handy for studying the sun. Alternatively, the spacecraft may have found a previously unknown window of transparency through the Venusian atmosphere to capture the surface below.

Twitter now allows users to add virtual tip jars to their accounts so others can support their tweets- Technology News, FP

Nokia 5.4 with a 48 MP quad camera setup to go on sale today in India on Flipkart- Technology News, FP