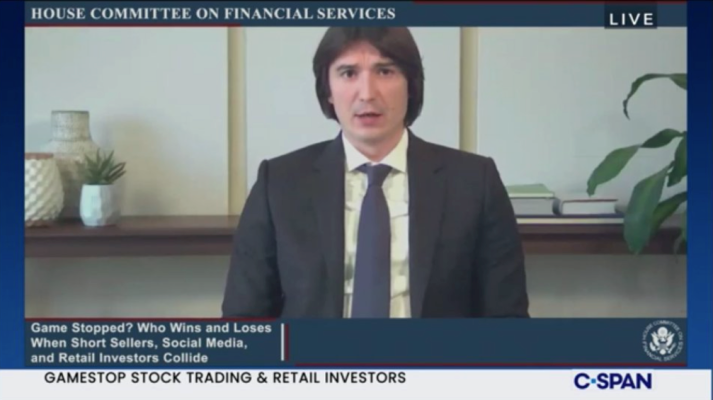 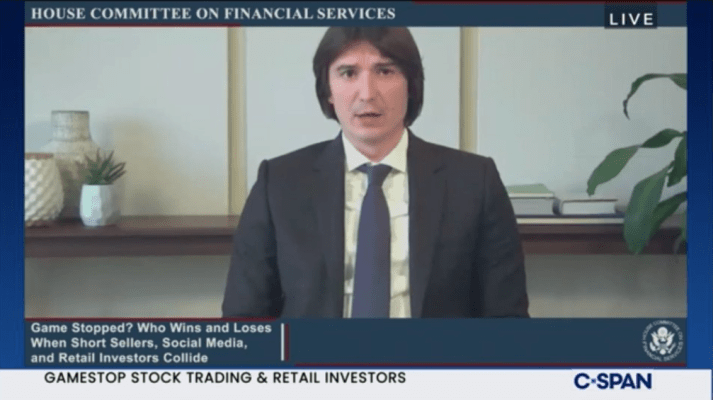 Update: There’s an entire second session of this? My lord.

Update two: The hearing went on and on — it continues as I write to you! — but something did come out that was worth sharing. Namely that Congress got Robinhood CEO Vlad Tenev to report that his company generates at least 50% of its revenue from payment for order flow, or PFOF. Given that Robinhood’s PFOF incomes were around $220 million last quarter, we can place a max cap of the company’s Q4 2020 revenue at $440 million, though I would hazard a guess that it was more in the $3xx million range.

Today the House Financial Services Committee dragged before them (virtually) for questioning the CEO of Reddit, a Cato wonk, the social media icon DeepFuckingValue, the CEO of Citadel Kenneth Griffin, a hedge fund bro who got whomped by DeepFuckingValue and the CEO of Robinhood Vlad Tenev, who got womped when individual investors joined DeepFuckingValue in his womping of the hedge fund and thus womped his capital requirements leading to general market chaos.

It was not very useful. Between a cascade of Zoom failures — mutings, incorrect unmutings, a green screen that was not actually in use and an actual gavel — members of Congress largely took five-minute slots to embarrass themselves, and not make material points.

The format was not conducive to real questioning, and most questions were both too long and either too precise and misguided in their direction, or too imprecise, even if they landed in the strike zone. Sitting here I am trying to recall a single thing that I learned. I suppose that Robinhood’s CEO was not sure on the details of his company’s arbitration agreement with users. And perhaps a little bit about how many of its users trade options. And that Reddit’s CEO has a nice suit.

Some members of Congress mocked the proceedings, calling them political theater. That earned a rebuke by Maxine Waters, chair of the House Financial Services Committee.

Some members of Congress nearly got around to asking something useful. But largely the method of asking questions was bilge, the responses canned and nothing much uncovered.

What would have worked? I suppose Congress could have brought in a few actual experts and a more limited number of guests, and then hammered them with questions about the ethical reality of payment for order flow, Robinhood’s app mechanics and how easily it offers access to exotic trading tools, and the like. That would have helped.

“I believe that investing is investing” – Steve Huffman

Which was not very helpful. That said, there were some good memes and jokes, so, let’s have some fun instead of being annoyed with our elected representatives:

Just waiting for “why doesn’t Robinhood take responsibility for customers losses?” from these incompetent boomers

The rest of it was a waste of time. As I write this sentence to you, a member of Congress just asked how Robinhood got its name. Which is dumb, as the name is so obvious it nearly makes your head hurt with how earnest it is.

Whatfix’s Acquisition Of Leap.is Will Help It Strengthen Mobile Capabilities