The Optoma UHD35+ projector is a bit of an oddity in the digital home theatre world in that it’s devoid of ‘smart’ features of any kind. There’s no autofocus, auto-keystone correction, accelerometer for leveling, in-built Chromecast, Android TV, or anything else. Strangely, I didn’t miss any of these features.

What the UHD35+ does have, instead, is a bright and powerful lamp, a sharp lens and an array of inputs and outputs that will enable you to put your expensive home theatre setup to good use.

Glancing through the spec sheet, it’s evident that this is an impressive piece of kit. It uses a 4,000-lumen lamp with an RGBWRGBW colour wheel and DLP tech, claims to support 4K 60 Hz as well as FHD at 240 Hz and a 4.2 ms response time. You get support for HDR10, HLG, true 10-bit colours, a claimed contrast ratio of 1.2 mn to 1, and more. The Optoma UHD35+ projector has a bright and powerful lamp along with a sharp lens. Image: Tech2/Anirudh Regidi

Diving a little deeper into the spec sheet, I see that the projector has a native resolution of 1080p and a refresh rate that tops out at 120 Hz, with the 4K resolution being achieved by XPR.

XPR essentially shifts the pixels diagonally at 120 Hz to achieve a total perceivable 4K resolution at 60 Hz. This is like the super-resolution tech you see in smartphone cameras, where the image sensor moves around to capture a more detailed, higher resolution image.

Whatever the case, it works, and footage, whether at 4K or FHD, is sharp and clear. The refresh rate and response time was also excellent, and I noticed no flickering or tearing in either games, movies, or 60 fps footage streamed from YouTube. HDR content looks fantastic, but I do wish the image was brighter. 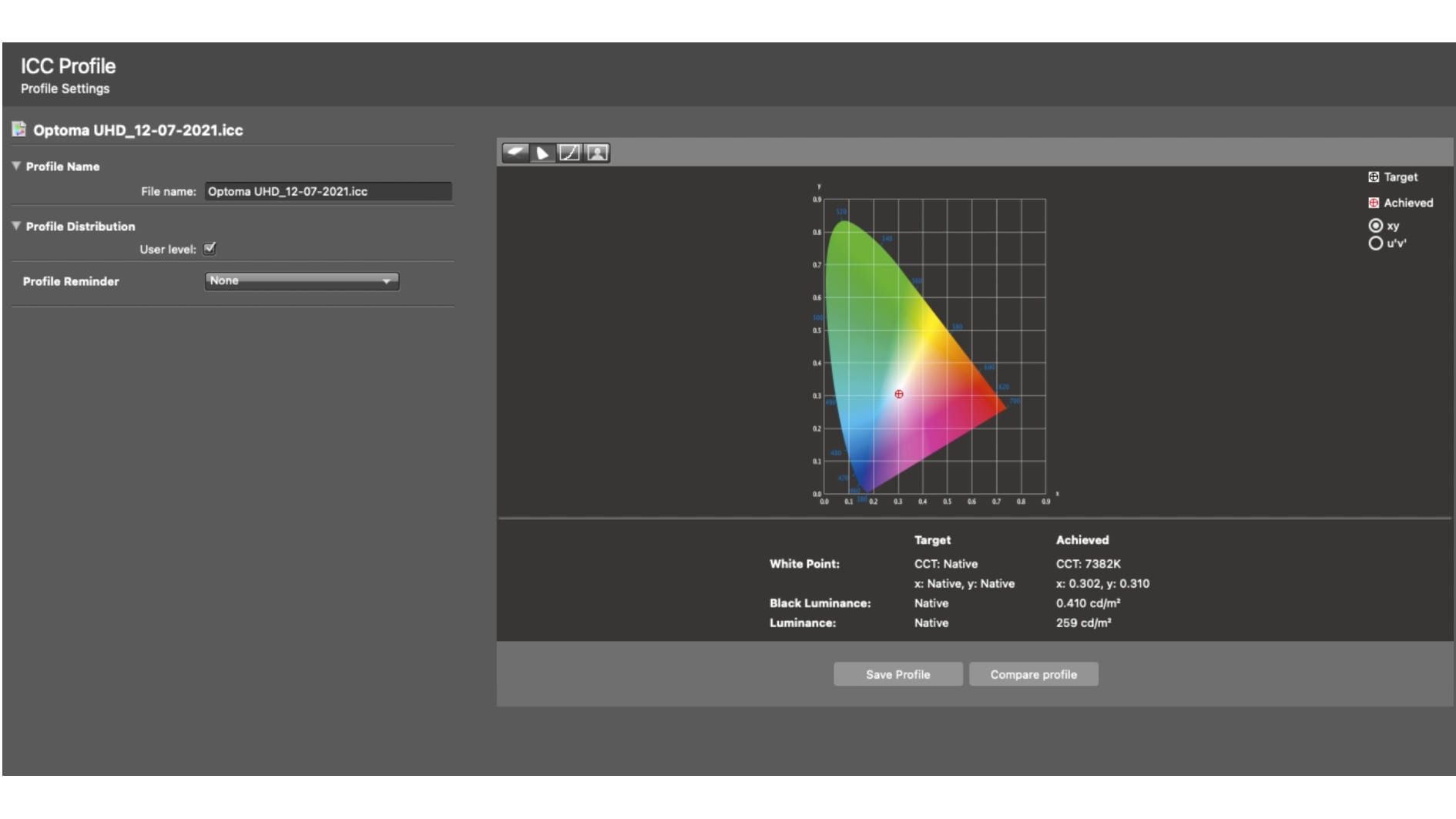 Speaking of, I measured a maximum projected luminance of 259 cd/m^2 off a reflective grey projection screen in SDR mode. Black levels came in at 0.410 cd/m^2, resulting in a contrast ratio of 631:1. The readings were taken via an Xrite i1Display Pro Plus, with the projector set exactly five feet away from the projection screen. Patterns were generated via the i1Profiler software. Brightness and contrast will improve with HDR content.

Other than that, colours are accurate enough for movies and gaming, and only a critical eye will notice that blue tones are slightly off. Focus is achieved via a large focus dial at the front of the lens. Image: Tech2/Anirudh Regidi

The setup process was quite simple. The rubber feet at the base of the projector are mounted on screws, so you can make fine adjustments to the level and angle of projection. Buttons for keystone correction are present on the (backlit) remote and the projector top panel, and focus is achieved via a large focus dial at the front of the lens. Another dial allows you to adjust magnification from 1x to 1.1x. Given how sharp and bright the projector is, achieving accurate focus took minimal effort.

1. It gets very hot, which means the fan gets very loud
2. Cable management will be a nightmare, especially if you have a proper home-theatre setup The Optoma UHD35+ features an array of inputs and outputs that will enable you to put your expensive home theatre setup to good use. Image: Tech2/Anirudh Regidi

As impressive as the projector is for Netflix binging, I think it really comes into its own when you play games on it. That massive, flicker-free projection redefines ‘immersive’ and is especially compelling when you play flight simulators or racing games. I don’t think the contrast is good enough for competitive gaming, however, so avoid playing CS: GO or venturing into Verdansk on this device.

My only complaint with the UHD35+ applies to all projectors. As bright as it is, it can’t compete with a similarly priced television on either convenience or colour accuracy. Setting it up, ideally, requires a roof mount and cabling snaking through the ceiling and into your AV receiver. You’ll need to black out the room for use in the day, and even then, a reflected brightness of 250 nits and a contrast ratio of 600:1 is something even a budget TV will manage without trying too hard. Oh, and the remote feels a bit tacky.

If you’ve invested in or are willing to invest in a projection environment, complete with blackout blinds, AV receiver, etc., I think the Optoma UHD35+ is a great buy, especially if you’re a gamer.