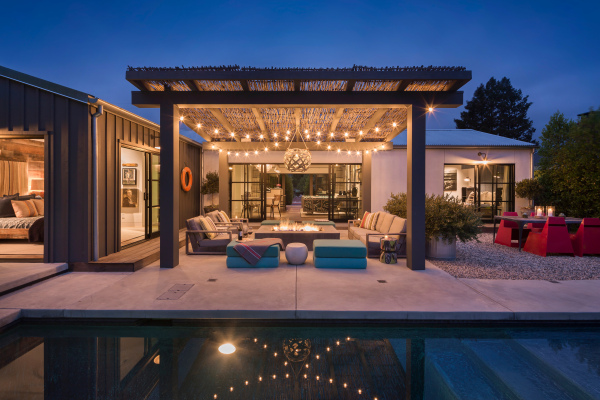 Less than six months after raising $75 million, Pacaso — a real estate platform which aims to help people buy and co-own a second home — announced today that it has raised $125 million at a $1.5 billion valuation.

SoftBank Vision Fund 2 led the Series C funding round for Pacaso, which essentially went from “launch to unicorn” in five months earlier this year and is pronounced like Picasso. New backers Fifth Wall and Gaingels also participated in the financing, along with existing backers Greycroft, Global Founders Capital, Crosscut and 75 & Sunny Ventures. (Sunny Ventures is Pacaso co-founder Spencer Rascoff’s venture firm). With the latest round, Picasso has now raised a total of $215 million in equity funding since its 2020 inception. It also secured $1 billion in debt financing earlier this year.

The fully distributed startup launched its platform in October of last year and already has an annualized revenue run rate of $330 million, according to CEO and co-founder Austin Allison — a feat which quite frankly seems remarkable. The company currently manages nearly $200 million in real estate on its platform, and in the second quarter, its website and mobile app saw a combined 1.8 million visits, up 196% from the first quarter. It’s currently serving owners “in the hundreds.”

Former Zillow executives Allison and Rascoff came up with the concept of Pacaso after leaving Zillow together about two years ago. (Publicly traded Zillow today has a market cap of $24 billion.)

With a unique co-ownership model made possible via the creation of a property-specific LLC, the company aims to reduce the cost and hassle of second home ownership. It also gives vacation homeowners an alternative option to renting out their property.

Pacaso distinguishes its model from the age-old concept of timeshares, which sell the right to use a fixed amount of time in a condo or hotel. Pacaso aims to bring together a small group of co-owners to purchase a share of a single-family home and “enjoy ongoing access throughout the year.”

The way it works is that Pacaso purchases a home either outright or shares in a home. The company then partners with local real estate agents to market the properties. It then sells shares in the home — from one-eighth of the home to a greater percentage.

Pacaso holds a brokerage license in about 25 top second home markets such as Napa, Lake Tahoe, Palm Springs, Malibu and Park City. It recently expanded to its first market outside of the U.S. — Spain. Buyers can view curated listings on the startup’s website, which includes active listings, as well as previews of homes under consideration for purchase based on buyer demand.

In January of this year, Pacaso had 30 employees. Today, it has over 120, according to Allison.

It’s important to note that while Pacaso one day aspires to offer homes that are affordable to a broader segment of the population, Allison acknowledges that currently, the homes available on its platform are “very much” luxury, or higher price, homes.

As for what markets it plans to enter next, he said that will be based on customer feedback. For now, Allison said, 65% of Pacaso’s customers are first-time second homeowners and 25% of are non-white or identify as LGBTQ.

SoftBank Investing Partner Lydia Jett says she was drawn to Pacaso for both professional and personal reasons.

For one thing, she says that when she was growing up, her family owned one-tenth of a “modest” beach house on the coast of Oregon.

“This asset that should be an investment, and source of joy actually had an incredible amount of friction, pain and unexpected cost,” Jett told TC. “It was a difficult asset to make liquid.”

The friction and pain she referred to included debates around scheduling, capital investments and tension when one of the co-owners needed liquidity but none of the others wanted to buy them out.

Part of the pain involved many of the the things that Pacaso is trying to solve for, Jett believes. By managing the whole co-ownership process, owners don’t have to deal with the “headaches” of maintenance, furnishings and scheduling respective vacations, among other things.

“We’ve designed  a very innovative scheduling solution we call SmartStay, which empowers a calendar to be shared equitably among the ownership group so that each co-owner has fair and equitable access to the property all times of the year,” Allison told TC

In other words, Picasso is effectively an intermediary between the co-owners, something Jett makes it a very attractive model.

Also, she said, SoftBank was drawn to the opportunity to “create a whole new category of home ownership.”

“This is something that fundamentally can enrich millions of people’s lives,” she told TC, “and help them realize that dream of co-ownership.”

India to have 330 million 5G subscriptions by 2026, says Ericsson report