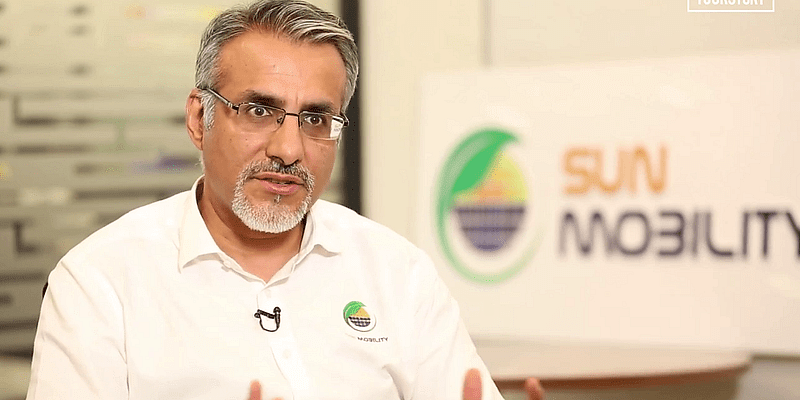 Tata Power-DDL — a power distribution utility serving seven million people in Delhi — on Thursday said it is partnering with Bengaluru-based EV infrastructure startup SUN Mobility to set up a network of battery ‘Swap Points’ across North and Northwest Delhi.

The companies launched the first ‘Swap Point’ with two Quick Interchange Stations to serve the growing demand for EVs in the Azadpur area — one of the busiest marketplaces of Delhi.

Speaking to YS, Chetan Maini, Co-founder of Sun Mobility, said these ‘Swap Points’ will be installed in 14 cities. In fact, the startup has set up 54 such Swap Points in partnership with IOCL.

“We can upgrade existing rickshaws running on lead-acid batteries to run on lithium-ion batteries. Lead-acid batteries are not quite efficient as they run for only six to nine months, giving a range of 70 km per day. Once we retrofit these rickshaws to use lithium-ion swap batteries, the efficiency of the vehicle increases. The range increases to 120 km, and being a lighter battery, the performance gets better,” Chetan said.

He believes 100,000 such rickshaws in Delhi can use the ‘Swap Points’ immediately.

By creating a vast network of ‘Swap Points’ across Delhi, SUN Mobility and Tata Power-DDL are supporting the capital’s ‘Switch Delhi’ campaign via affordable, low-cost electric two and three-wheelers that can swap batteries within minutes to get a limitless range for its drivers and support the growing eco-friendly economy.

Given the volume of electric two and three-wheelers in the region, the partnership aims at setting up a broad network of battery swapping infrastructure that makes swapping accessible to customers at the same scale and ease as conventional refuelling.

Ganesh Srinivasan, CEO of Tata Power-DDL, said, “We are committed to a clean and pollution-free Delhi, and believe we can power the ‘Switch Delhi’ campaign in a big way to establish Delhi as the EV capital of India.” Tata Power-DDL is a joint venture of Tata Power and the Government of NCT of Delhi.

Jasmine Shah, Vice Chairperson of Dialogue and Development Commission Delhi, said, “This initiative is perfectly in line with the CM’s vision to make Delhi the EV capital of India. We are very clear that zero emissions is the future, and it’s nice to see private players like SUN Mobility and Tata Power-DDL matching the government’s ambition with such innovative models, including battery swapping, to help make this a reality.”

Forerunner is software for NFIMBYs, or no flooding in my backyard – TechCrunch

Amsterdam-based startups that raised funding in June; some are hiring right now

Astronomer ready for its next mission after Datakin acquisition, $213M Series C – TechCrunch

How a Streamlined Event Booking System Can Boost Your Business