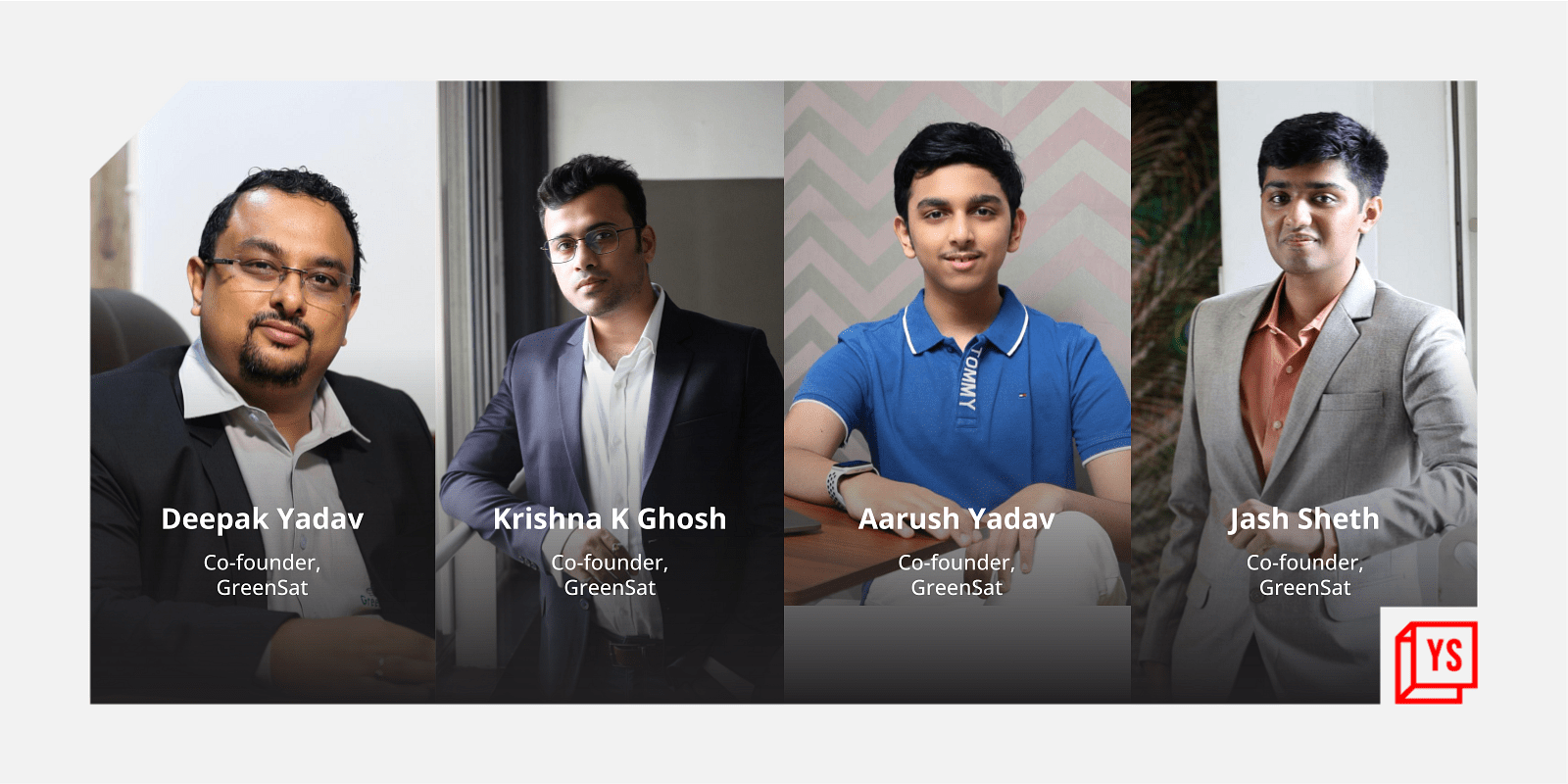 When visuals of the farmer’s protest in 2020 played out on 15-year-old coder Aarush Yadav’s screens, he started questioning if there was any way he could leverage technology to ease the lives of India’s ‘ann daata’ or food growers. His father, Deepak Yadav, an investment banker, was always interested in agriculture from a young age, having spent a large part of his childhood in the small towns of Madhya Pradesh.

Deepak had been exporting grapes and pomegranates to Europe for a few years, and could relate with the issues Aarush wanted to help solve for farmers. They teamed up together and launched ﻿Greensat Innovation labs﻿.

One of YourStory’s Tech50 startups, GreenSat is an agritech company that uses satellite imagery and AI (Artificial Intelligence)/ ML (Machine Learning) to assess farmlands and provide AI-driven insights to farmers about the state of their farmlands, and potential threats to it, such as pest issues or anything that could basically affect crop growth and production.

It also helps farmers understand which parts of their farmlands are not producing good yield, areas that have nutrient deficiencies, irrigation issues, and how to troubleshoot for all of them.

The reports are prepared in the local language of the farmers and are available to them free of charge, every 15 days.

GreenSats also has an agri-finance stack on top of the farmland assessment feature, which helps farmers apply for loans easily, and purchase insurance for their crops, among other things.

“Our vision is to provide complete integration of the food chain, i.e. the farmers, bankers, buyers and insurers, through an app-based technology which is completely free of cost for all farmers. We want to provide a faceless interaction between all the food chain elements with the use of modern technology,” Deepak tells YourStory.

The startup has built a B2B2C (business-to-business-to-consumer) model for farmers, buyers, insurers, and bankers. It provides farmers with market linkages to sell their produce through its tie-ups with commodities exchanges, such as the National Commodity and Derivatives Exchange,  and food aggregators such as ﻿Zomato﻿ (Hyperpure) and ﻿Swiggy﻿.

The sale agreement between the farmer and buyer is set up on the platform, which is available in 10 vernacular languages.

GreenSat also specialises in commodity price research and provides data-backed recommendations to food aggregators trying to purchase produce from farmers on its platform. It protects farmers by enabling both buyers and sellers to draw up advance purchases and forward contracts with farmers, thereby avoiding price fluctuations.

The startup has tied up with SBI General insurance to provide “claimless” insurance to farmers in case of weather vagaries, using its satellite imagery report and ISRO (Indian Space Research Organisation) report for certification. The claim is immediately settled and the money sent directly into the farmer’s account. It has also tied up with Yes Bank for financial services, especially for crop loans.

GreenSat’s services are free for farmers.

It largely earns its revenue from buyers, insurers, and bankers. It charges banks and insurers a reference or a transaction fee and a monitoring report fee from banks for its satellite mapping services, which are used by the financial services providers for underwriting loans. Similarly, it charges buyers on the basis of their procurement.

The startup says it has currently made Rs 5 crore in revenue, and will close its March balance sheet at around Rs 10 crore. It has enabled 100 crop loans via its banking partners, and disbursed 9,700 reports to farmers who’ve wanted to avail its satellite mapping service, via its app, as well as WhatsApp.

Within the first five months, the startup onboarded over 10,000 farmers on its app, registering a month-on-month revenue growth of over 100 percent. The startup is present in Mumbai, Pune, and Hyderabad.

The startup is self-funded and bootstrapped. Deepak has invested around Rs 1.25 crore in the venture, to date, and is now looking to raise $1 million to power its expansion, tech, marketing and business development.

GreenSat’s founders include Deepak, Aarush, Krishna Kumar Ghosh and Jash Sheth. The founders together have a total industry experience of 21 years. The highest qualification among them is post-graduation and the average age of the founders is 32 years.

The entire tech process of loan disbursal and insurance is built on blockchain technology, which is patent-pending at the moment.

It uses Node.js along with Google Cloud for the backend, MongoDB and Cloud Firestore for databases, and Flask servers with Python code for the AI experience.

The startup has received copyright on one of its tech initiatives called ‘faceless agri banker’,  and also applied for a patent.

The startup aims to build a full-stack agri fintech and data analytics company, and launch more innovative products in the agri sector.

Its competitors include ﻿DeHaat﻿, ﻿SatSure﻿, ﻿CropIn﻿, ﻿Arya﻿, and ﻿BharatAgri﻿, among others.

GreenSat says it’s building the world’s first reclaimed water stock exchange for use of STP (sewage treatment plant) treated water, certified fit for agricultural use by farmers. Pilots in rural Rajkot have already been conducted and several others are planned for other rural areas in the near future.

The startup says it will soon be expanding to five new cities with Zomato and Swiggy, and start trading on behalf of farmer-producer organisations on the NCDEX (National Commodity & Derivatives Exchange Ltd).

Transforming the sericulture industry, one mulberry farm at a time