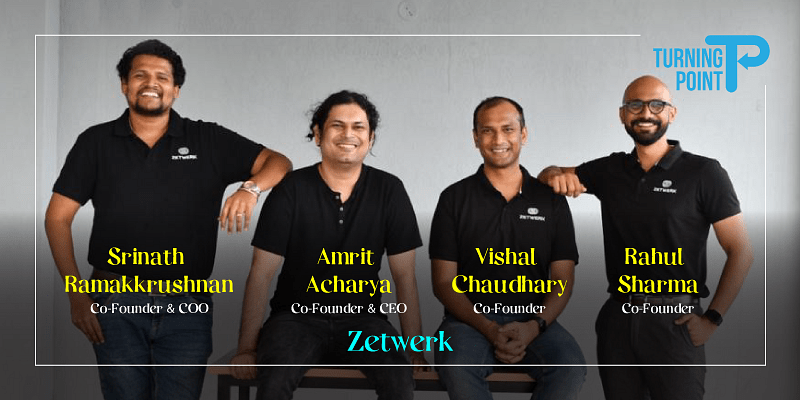 B2B manufacturing startup ﻿﻿Zetwerk﻿, which recently entered India’s unicorn club with $150 million in a Series E round at a valuation of $1.33 billion, was started three years ago because the four founders “found each other at the right place, at the right time”, according to Amrit Acharya, Co-Founder and CEO of Zetwerk.

The startup was launched in May 2018 by four IIT alumni: Amrit, a former associate at McKinsey & Company and former ITC executive; Rahul Sharma and Srinath Ramakkrushnan, who earlier worked at logistics firm Blackbuck, and Vishal Chaudhary, Rivigo’s former business lead. Srinath was also a part of OfBusiness’ founding team.

In a conversation with YourStory, Amrit Acharya, CEO and Co-Founder of Zetwerk, says the startup was actually started as a SaaS platform but shortly pivoted to a business-to-business marketplace for manufacturing items. This was the turning point for the company.

Since then, the company has grown leaps and bounds. It entered the unicorn club within three years of starting up with 500 team members and more than 100 clients across 15 countries in India, North America, the Middle East and Southeast Asia.

Amrit attributes the success to the company culture, which is centred on solving problems quickly, being tech-first, and loving their work.

Amrit Acharya spent his first four years at ITC after graduating from IIT Madras in 2010. His first role at ITC was to build a new factory. “That’s where I understood the nuts and bolts of how manufacturing works,” Amrit says.

After that, he put in another two years going to business school and spending some time in the US. But, he always wanted to do something of his own, and quit his job and returned to India in January 2018 to plunge into entrepreneurship.

After his return, he reconnected with batchmate and former ITC colleague, Srinath, who had already started his entrepreneurial journey with OfBusiness. But, Srinath was also keen to solve issues on the supply side of manufacturing, which he understood well due to his career at ITC, Blackbuck, and ofBusiness, and as he was born and brought up in a family owning a manufacturing business.

“I understood these issues because of my stint at ITC. When I and Srinath reconnected to do something together, we were thinking of convergence in the manufacturing space that would help people to manage hundreds of suppliers better,” Amrit says.

He recalls managing hundreds of suppliers on Google sheets for close to Rs 500 crores of procurement at ITC. The idea was to help managers with this job as the role has been very “manual and prone to errors”.

Along with Rahul Sharma (IIT Roorkee) and Vishal Chaudhary (IIT Kharagpur), they started Zetwerk in May 2018 with a SaaS platform targeted at project managers to manage their existing supply chain better. The team even raised a round of capital for the SaaS product, but had to pivot within six months.

Amrit says the team built this software over two months, and reached out to potential clients including large global companies. “They all really liked the software, but still said no,” he recalls.

He adds that the companies really liked the software, but could not sign up due to decision-making issues. But, they asked if they could use the software to discover new suppliers. That was our eureka moment, says Amrit.

“We had raised capital for SaaS, but we went back to investors telling them that we’ll start a software business. We felt that this marketplace model had a higher probability of success, and the investors supported us,” tells Amrit.

All this happened between May 2018 and August 2018; since then, there has been no looking back.

Adoption of the platform increased globally, growing 3X yearly in 2020. “In the pandemic, we became a must-have solution from being a good-to-have solution,” Amrit says.

Going forward, Zetwerk wants to continue to grow fast, and play a key role in India’s growth story. “We feel that in the next decade of the Indian growth story, manufacturing will play a huge role in catalysing both small manufacturers and large customers to achieve their fullest potential,” Amrit says .

YouTube Analytics: How to Use Data to Inform Your Future Videos : Social Media Examiner

How Much Equity Should You Dilute?

A mobile wallet for blockchain-based apps