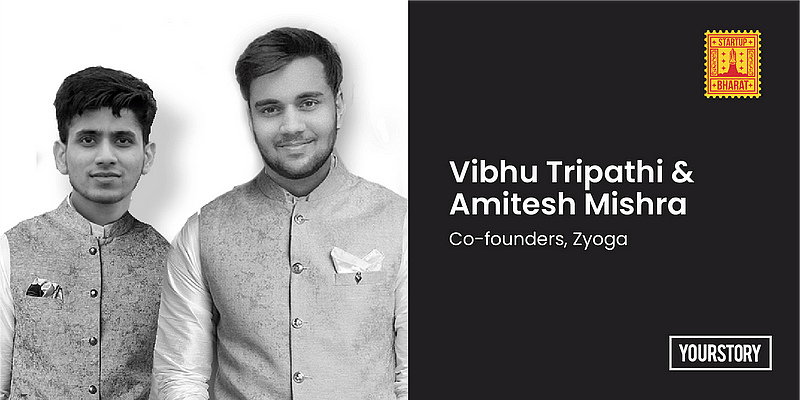 Fitness is not about stepping into fancy gyms and parks anymore; it is now something achievable from the confines of our homes. As we navigate through a deadly pandemic, and find ways to remain healthy, many apps have made their way to help us keep our physical health in check.

According to app analytics platform App Annie, close to 71,000 new fitness and health apps were launched in 2020, a 13 percent increase over 2019.

﻿Zyoga﻿, an artificial intelligence-based yoga app, was in the works around this time. Launched in February 2021 by Bhopal-based Amitesh Mishra, a computer science graduate and serial entrepreneur, and batchmate Vibhu Tripathi– Zyoga provides yoga sessions just like a normal online class, but with a twist.

“When you do yoga at home, you follow a video. However, most of the time, there is no human interaction. With Zyoga though, you not only have the video, but it can also tell you if you are doing a posture correctly or not,” Amitesh tells YourStory in an interaction.

He explains how they worked around this. The founders hired a few instructors of different body types and recorded them doing yoga. Once the videos were recorded, it was fed into the app’s AI technology. Now, whenever a user follows the routine, the app scans the user’s posture through a smartphone’s front camera and compares it with the videos that the instructors fed into the system. If there are any differences between the two, the app informs the users.

“The app also suggests an alternative if you are not able to do the version shown to you,” he adds.

Amitesh and Vibhu believe yoga is the most difficult form of workout. “With so many postures and poses, this ancient form is practiced by people with high intent. And we thought if we could incorporate the most difficult form of exercise into our app then other workouts would be easier to add,” says Amitesh. There are free and paid programmes with subscriptions between Rs 299 and Rs 1,499 per month.

Zyoga will also be launching yoga for pregnant women, and kids yoga.

Zyoga, bootstrapped for now with an investment of Rs 20-24 lakhs, is open for funding. The founders refrained from sharing the exact revenue numbers but they are expecting to clock upwards of Rs 10 lakh, from their consumer and corporate facing fronts, before the end of this year.

The founders will also be launching yoga, which can be practiced by pregnant women, mindful series– starting with walking– with focus and kids yoga.

With a user base of close to 5,000 — the app has users from India, the US, and Canada, among other countries. Since its launch, the firm claims to have not carried out any form of marketing exercises and has about 3,000 organic users, with the rest being corporate clients. The aim is to add 25,000 users by the end of this financial year.

“We also provide specially designed programmes for our clients. One of our customers wanted chair yoga for their employees. We curated a programme for them, and plan to add it to our existing plan for other users,” says Amitesh.

Amitesh and his co-founder are also trying to tap into the growing market for yoga across the world.

According to Statista, Yoga contributes to $9.9 billion in revenue to the health industry across the US, while yoga and pilates classes have a 51.3 percent market share.

So far, Zyoga has been growing organically but now the firm plans to do some aggressive marketing in India and abroad.

While startups are being built in probably every hinterland of India, Amitesh describes the biggest challenge has been hiring for the tech team.

“People who graduate from engineering colleges in Bhopal want to go and work in Bangalore (Bengaluru) or Delhi. This makes it hard for us to attract them. Either we must match their pay or drive our entrepreneurial vision across,” says Amitesh.

The company, which was built in six months, took three months to hire its tech team alone. But even though the tech pool is small in Bhopal, the talent is very lucrative, Amitesh is quick to add. “If you hire someone here through your connections, you know the person will get the job done and we probably would not have to hire again.”

While yoga and at-home workouts are here to stay, Zyoga is competing with many videos available for free on YouTube, and well-funded platforms including Fireside Venture-backed ﻿SARVA ﻿, and Tata Digital-acquired ﻿Cure.fit﻿. It remains to be seen if this brand from hinterland India will have something new to offer.