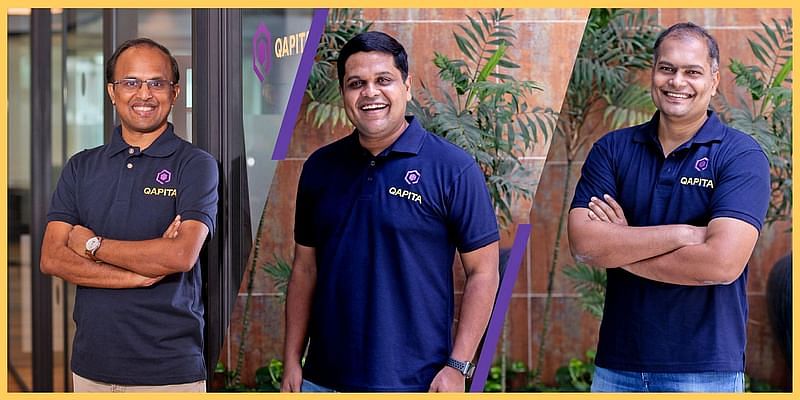 The world is moving towards digital solutions, but surprisingly key documents which determine ownership for private companies and startups are not on digital systems. Share certificates are on paper and cap tables are on spreadsheets. The practice is still prevalent in South and Southeast Asia.

Determined to change the practice, Qapita has created a platform that digitises the entire ownership structure of a company or what is commonly called the cap table. The SaaS startup has set up a research & development centre in Hyderabad and an office in Singapore.

The experience of the three founders of Qapita — Ravi Ravulaparthi, Lakshman Gupta and Vamsee Mohan — proved to be very critical as they came from diverse fields like investment banking, investments and technology. The trio’s experience led to the creation of a platform which presents a single source of truth for the entire ownership structure and also helps to simplify administration of the employee stock option plan (ESOP). The feature ensures that information is readily available to all stakeholders without any hassles.

“I encountered this problem often while working as an investment banker and saw how many founders of young companies do not have ownership documents that are managed on systems,” shared Ravi Ravulaparthi, Co-founder & CEO, Qapita in an interview with YourStory Founder & CEO Shradha Sharma.

“It is high time that it was managed on a system and we solved this problem as a team,” he added.

Typically it is observed that such information is posted on multiple documents like spreadsheets, emails, certificates and even text messages on phones.

For Qapita, there was another hurdle which the team had to overcome before they could even formally launch operations. The external environment was not conducive to launch a startup as the world was reeling under the Covid-19 pandemic. The process of identifying and onboarding talent proved to be challenging.

Nevertheless, Qapita managed to build a well-distributed network of talent for its India and Singapore offices, where everything is done virtually. Its employees have worked with global financial institutions such as Citibank and Goldman Sachs.

Today, the startup is working with a 30-member team who is present in 14 different locations. As Ravi jocularly puts it, “We are not just a company born on the cloud, but during a lockdown.”

Qapita’s digital platform solves three key issues for any private company or startup. Firstly, the entire ownership or cap table is managed on the system. Secondly, there is complete transparency on the ESOP holding of employees and lastly, all this available in a digital format.

“We have solved all three issues with a single platform which benefits the entire ecosystem,” says Ravi.

Any company or startup that adopts this platform can benefit in multiple ways – transparency with respect to tracking and disseminating ownership, simplifying ESOP administration and increased employee engagement. Also, the system can throw up analytics and reports with respect to cap table and ESOPs. Eventually, Qapita hopes to play a role in transactions as well — in terms of running liquidity programmes mandated by the startup and offer exit to ESOP holders and early investors at startups as well as fundraising.

The team was aligned about the problem statement and how they were going to solve it. Ravi believes it was important for the founders and senior members to instil a culture where actions speak louder than words. “This is a culture which can be digitally transmitted only through your actions,” says Ravi.

Given the product and the team, Qapita was able to quickly close its seed round of funding of $1.8 million in September, 2020 which had the backing of leading names like Vulcan Capital and K3 Ventures besides certain prominent angel investors as well as family-offices. Indonesia’s leading VC firm, East Ventures, topped up the seed round in January, 2021.

Ravi says, “When we went to the market for the seed round of funding, it closed relatively fast as investors identified with the problem we were trying to solve.”

Qapita also raised a pre-series A round of funding of $5 million in April, 2021 which was led by MassMutual Ventures. Ravi describes this round as a complete surprise as there was a lot of inbound interest from the investors. Today, Qapita has a presence in India, Singapore and other parts of Southeast Asia with over 100 companies using their platform. And, the journey has just started for Qapita.

“Our bigger purpose is to create a platform through which one can see how wealth is created and managed. It is about democratising ownership where ultimately the wealth is going back to the people. So, we are building a stack that digitises equity,” says Ravi.

[Tech50] How Bengaluru-based Neokred is offering ‘bank in a box’