This month has been a busy one for Mars exploration. Several countries sent missions to the red planet in June last year, taking advantage of a launch window. Most have now arrived after their eight-month voyage. Within the next few days, NASA will perform a direct entry of the Martian atmosphere to land the Perseverance rover in Mars’s Jezero Crater.

Perseverance, about the size of a car, is the largest Mars payload ever — it literally weighs a tonne (on Earth). After landing, the rover will search for signs of ancient life and gather samples to eventually be returned to Earth. NASA will perform a direct entry of the Martian atmosphere to land the Perseverance rover in Mars’s Jezero Crater. Image credit: NASA/JPL-Caltech

The mission will use similar hardware to that of the 2012 Mars Science Laboratory (MSL) mission, which landed the Curiosity rover, but will have certain upgrades including improved rover landing accuracy.

Curiosity’s voyage provided a wealth of information about what kind of environment Mars 2020 might face and what technology it would need to survive.

Mars: a most alien land

As Mars is a hostile and remote environment with an atmosphere about 100 times thinner than Earth’s, there’s a little atmosphere for incoming spacecraft to use to slow down aerodynamically.

Rather, surviving entry to Mars requires a creative mix of aerodynamics, parachutes, retro propulsion (using engine thrust to decelerate for landing) and often a large airbag. Also, models of Martian weather aren’t updated in real time, so we don’t know exactly what environment a probe will face during entry. Unpredictable weather events, especially dust storms, are one reason landing accuracy has suffered in previous missions.

NASA engineers call the entry, descent and landing phase (EDL) of Mars entry missions the “seven minutes of terror”. In just seven minutes there are myriad ways entry can fail.

The 2012 MSL spacecraft was fitted with a 4.5-metre-diameter heat shield that protected the vehicle during its descent through Mars’s atmosphere.

It entered the Martian atmosphere at around 5,900m per second. This is hypersonic, which means it’s more than five times the speed of sound.

Mars 2020 will be similar. It will rely heavily on its thermal protection system, including a front heat shield and backshell heat shield, to stop hot flow from damaging the rover stowed inside.

At hypersonic speeds, Mars’s atmosphere won’t be able to get out of the spacecraft’s way fast enough. As a result, a strong shock wave will form off the front.

In this case, gas in front of the vehicle will be rapidly compressed, causing a huge jump in pressure and temperature between the shock wave and the heat shield. 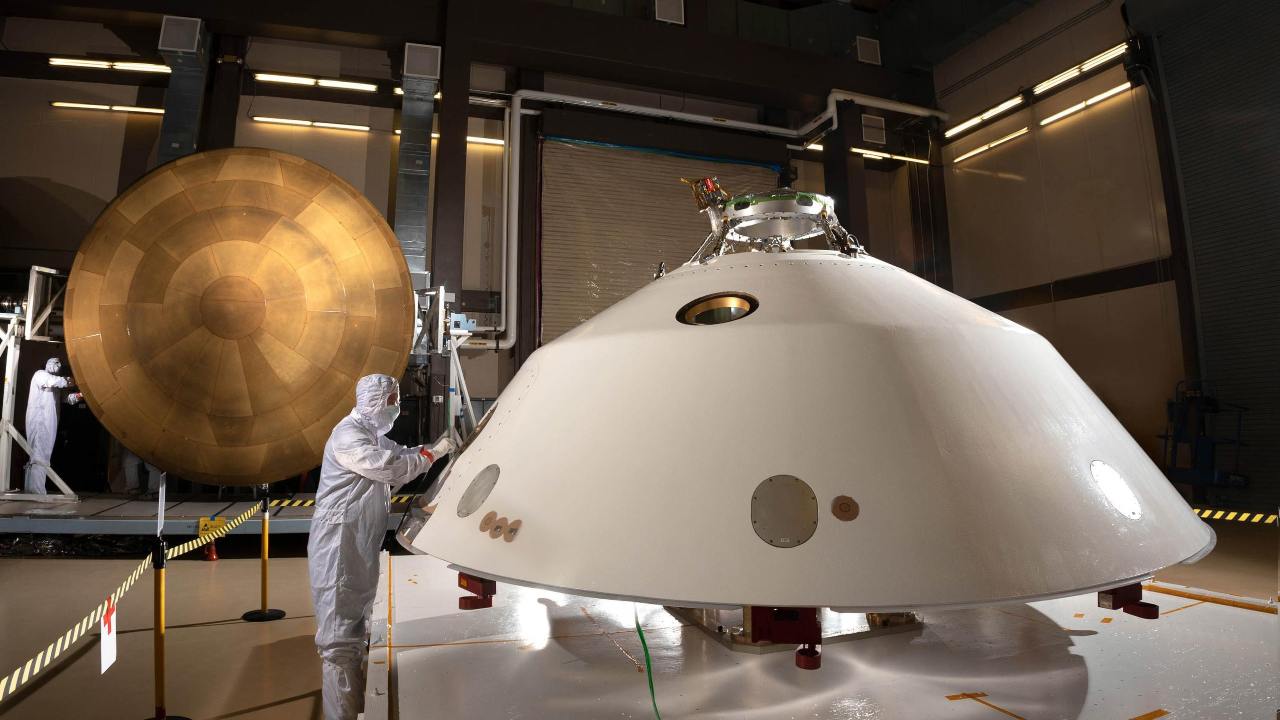 Since the MSL 2012 and Mars 2020 missions use relatively larger payloads, these spacecrafts are at higher risk of overheating during the entry phase.

But MSL effectively circumvented this issue, largely thanks to a specially-designed heat shield which was the first Mars vehicle ever to make use of NASA’s Phenolic Impregnated Carbon Ablator (PICA) material.

This material, which the Mars 2020 spacecraft also uses, is made of chopped carbon-fibre embedded in a synthetic resin. It’s very light, can absorb immense heat and is an effective insulator.

All entries before the 2012 MSL mission had been unguided, meaning they weren’t controlled in real-time by a flight computer.

Instead, the spacecraft were designed to hit the Mars’s “entry interface” (125km above the ground) in a particular way, before landing wherever the Martian winds took them. With this came significant landing uncertainty. This artist’s impression shows thrusters controlling the angle of the spacecraft during MSL 2012’s Mars entry. Mars 2020 will use the same technique. Image credit: NASA/JPL-Caltech

The area of landing uncertainty is called the landing ellipse. NASA’s 1970s Viking Mars missions had an estimated landing ellipse of 280x100km. But both MSL and now Mars 2020 were built to outperform previous efforts.

The MSL mission was the first guided Mars entry. An upgraded version of the Apollo guidance computer was used to control the vehicle in real time to ensure an accurate landing.

With this, MSL reduced its estimated landing ellipse to 20×6.5km and ended up landing just 2km from its target. With any luck, Mars 2020 will achieve similar results. 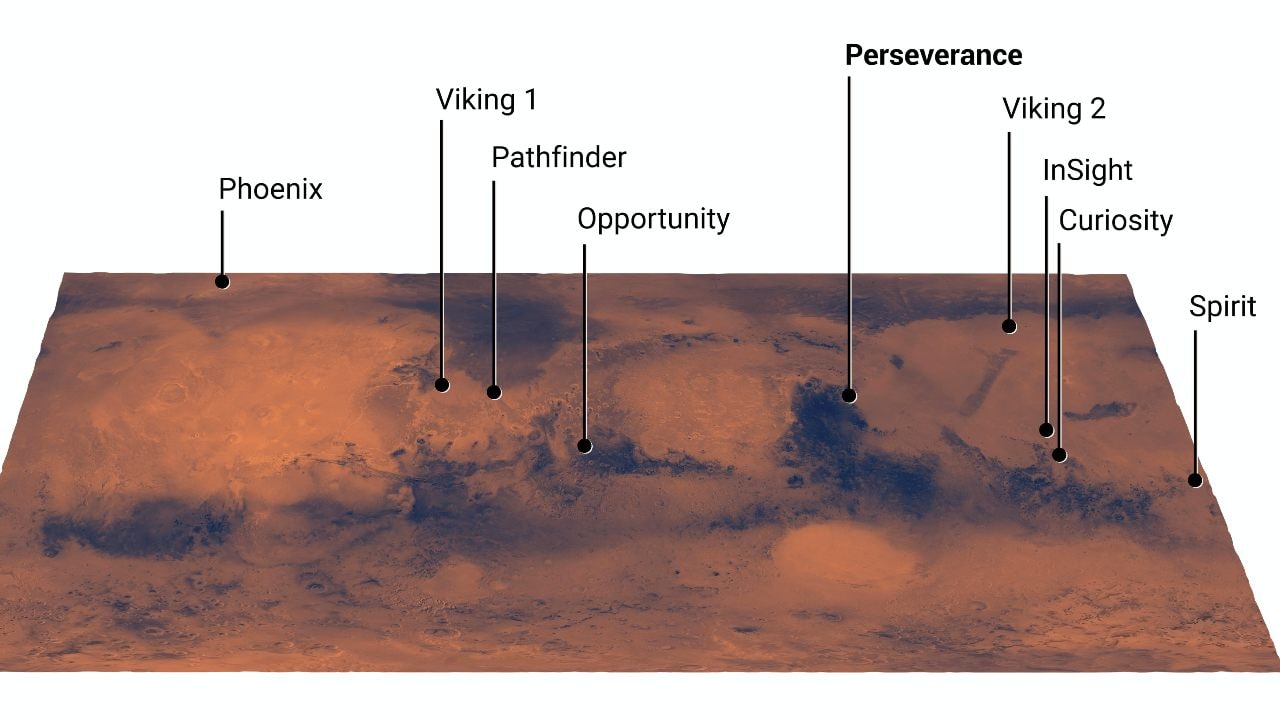 A parachute will be used to slow down the Mars 2020 spacecraft enough for final landing manoeuvres to be performed.

With a 21.5m diameter, the parachute will be the largest ever used on Mars and will have to be deployed faster than the speed of sound. 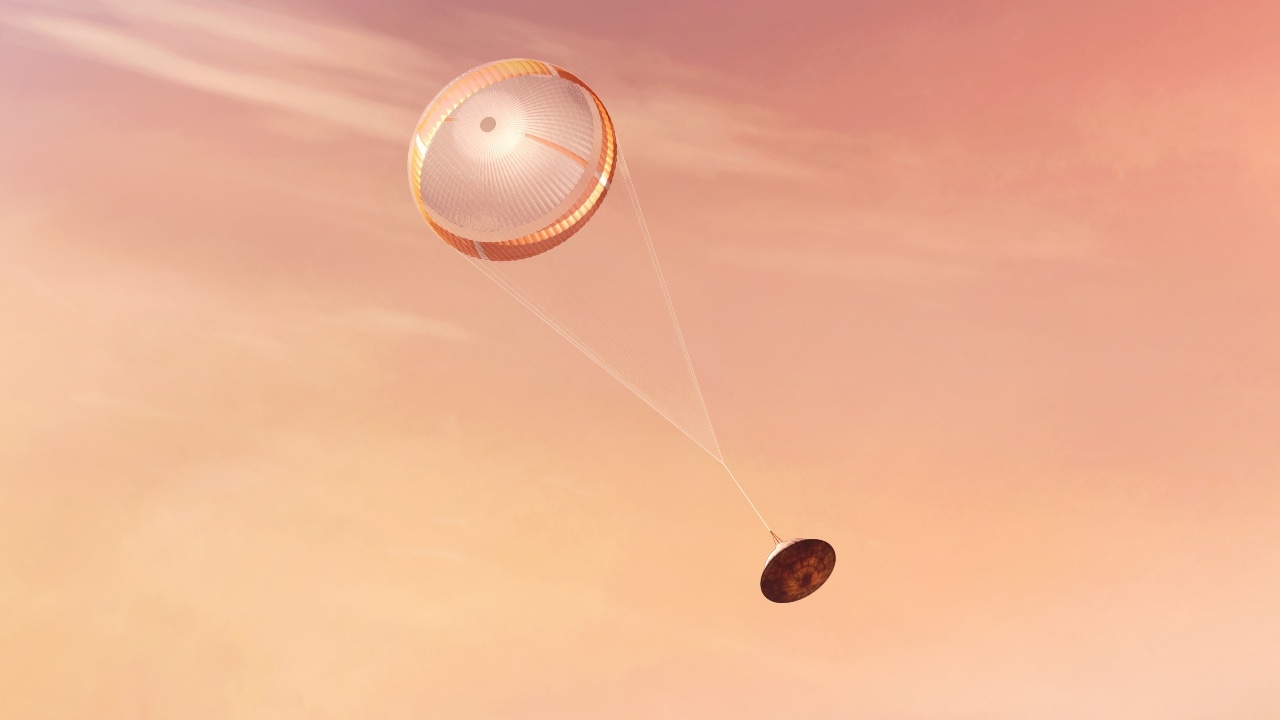 The spacecraft descending after the parachute has been deployed. Image credit: NASA/JPL-Caltech

Deploying the parachute at the right time will be critical for achieving an accurate landing.

A brand new technology called “range trigger” will control the parachute’s deployment time, based on the spacecraft’s relative position to its desired landing spot.

About 20 seconds after the parachute opens, the heat shield will separate from the spacecraft, exposing Perseverance to the Martian environment. Its cameras and sensors can begin to collect information as it approaches ground.

The rover’s specialised terrain-relative navigation system will help it land safely by diverting it to a stable landing surface.

Perseverance will compare a pre-loaded map of the landing site with images collected during its rapid descent. It should then be able to identify landmarks below and estimate its relative position to the ground to an accuracy of about 40m.

Terrain-relative navigation is far superior to methods used for past Mars entries. Older spacecraft had to rely on their own internal estimates of their location during entry.

And there was no way to effectively recalibrate this information. They could only guess where they were to an accuracy of about 2-3km as they approached ground.

The parachute carrying the Mars 2020 spacecraft can only slow it down to about 320km per hour.

To land safely, the spacecraft will jettison the parachute and backshell and use rockets facing the ground to ease down for the final 2,100m. This is called “retropropulsion”. 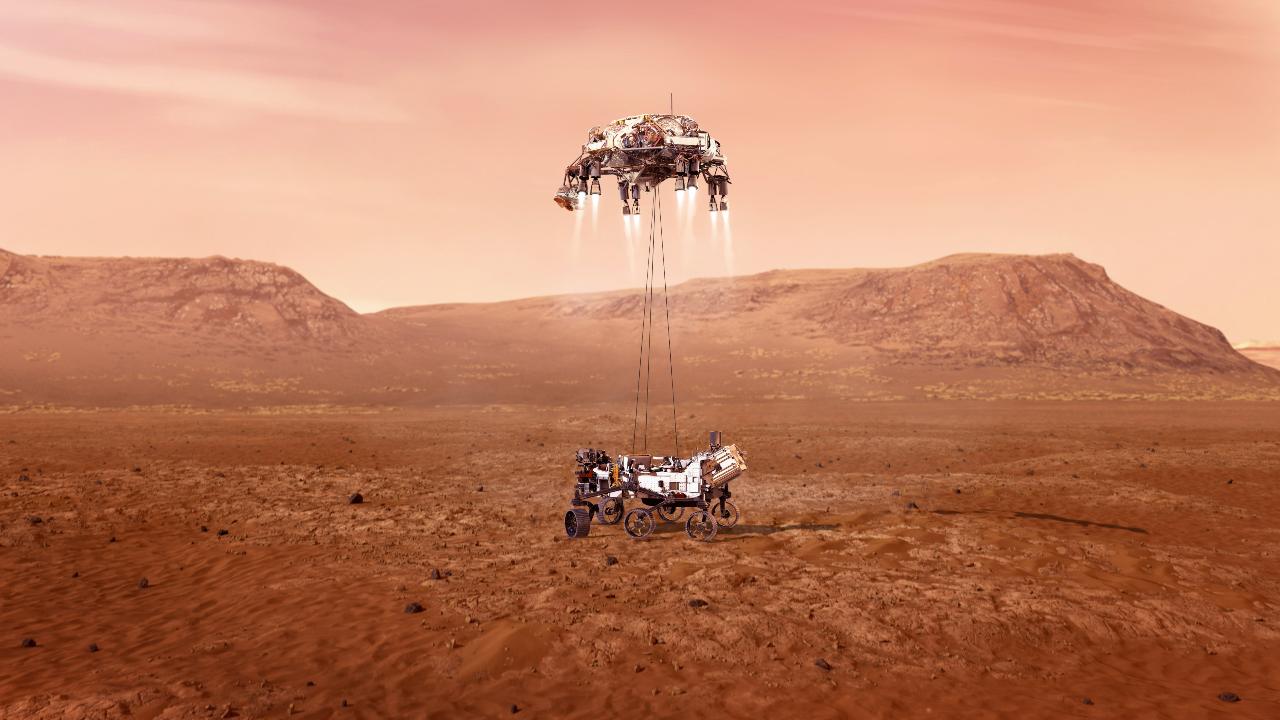 Perseverance rover being placed on Martian soil by the skycrane Image credit: NASA/JPL-Caltech

And to avoid using airbags to land the rover (as was done in missions prior to MSL), Mars 2020 will use the “skycrane” manoeuvre; a set of cables will slowly lower Perseverance to the ground as it prepares for autonomous operation.

Once Perseverance senses its wheels are safely on the ground, it will cut the cables connected to the descent vehicle (which will fly off and crash somewhere in the distance).

And with that, the seven minutes of terror will be over.

What exactly is the difference between the two?- Technology News, FP