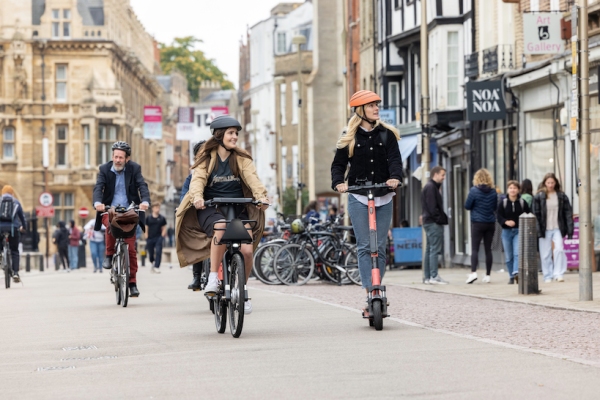 The European e-scooter market is currently the main battleground for companies playing in the micromobility space, taking advantage as they are of Europe’s relatively compact cities and the desire of populations to move to more sustainable transportation. In 2021, players like Tier, Voi and Dott continued to raise VC backing.

But the war for funding is ultimately about who will win in this coveted market — either through market domination via raising the most capital, putting pressure on competitors or by acquiring said competitors.

Thus, the latest chapter in this saga is about to play out, with the news that Voi Technology — a major European micromobility operator — has raised a $115 million Series D funding round in what it describes as an oversubscribed financing round that, says the company, will power its expansion into new markets. Voi already has scooters in 70 cities across the U.K. and Europe. This round comes after it raised $45 million in only August this year. Total capital raised in 2021 amounts to $160 million, and $500 million since Voi launched.

As well as expanding, this raise is also about a future IPO. A spokesperson said: “Following this fundraise, Voi is going to start preparing for an IPO. Voi will begin preparations but the timetable cannot be set in stone at this stage.”

Fredrik Hjelm, co-founder and CEO of Voi Technology, said in a statement: “There is no doubting that micromobility is here to stay and Voi intends to be the go-to mobility platform in Europe for cities that want to give their residents and visitors an integrated, smart mode way to travel. Working closely with cities we are seeing a new vision of urban transport taking shape that is highly complementary to public transport. We are building the future of transport and we are committed to making every Voi city a better place to live.”

With cities starting to adopt regulations and grant licenses, the way that micromobility operators are scaling is by getting approvals from city officials, thus securing their access to consumers. So this war chest is partly about being able to scale to meet those licenses.

The spokesperson added: “The demand for micro mobility has never been higher and as a result, we want to ensure we are delivering the service people need. With this funding, we’re going to invest in solutions for our rides and cities, including fixing parking, pavement riding and twin riding, rolling out a better model of e-scooter and investing in R&D.”

The round was led by Raine Group and VNV Global (which led the last funding round), and included Inbox Capital, Nordic Ninja, Stena Sessan, Kreos Capital and new investors Ilmarinen, Nineyards Equity and ICT Capital and others. Entrepreneurs and operators from King, Avito, BCG and more also participated.

Voi claims it has achieved a 140% year on year revenue growth in 2021, while increasing margins and profitability. Voi also won a lot of city tenders this year, putting pressure on competitors.

Of course, microbilitlity companies are also pushing at an open door, taking advantage of the news trend among cities to reduce the reliance on private cars, relieve congestion, lower carbon emission and cut pollution, as well as the individual desire to avoid crowds on public transport because of COVID-19.

Voi is also planning to launch the “Voiager 5”, which it claims will be the safest e-scooter model to date. Its arrival will be timely.

The potential for fires started by e-scooter battery packs was highlighted in the U.K. recently when Vio was forced to withdraw part of its fleet from rental after one its machines began burning in a user’s home.

Commenting, Jack Samler, general manager at Voi U.K., told TC: “We had an instance of smoke being emitted from one of our Long Term Rental e-scooters in Bristol earlier this month. This was an isolated, one-off, incident with one of our Long Term Rental scooters. As an extreme precautionary measure, we asked users to keep the scooters outside whilst we assessed the situation — all users have been refunded for the inconvenience for the month of December.”

He said the service was only temporarily stopped as a result of this smoking scooter, but following an investigation, the service quickly resumed: “The vast majority of users are already using the service again, and we expect all riders to continue enjoying our Long Term Rental service to move around in a sustainable manner very soon.”

Assuming all those batteries get safer, Voi is also committing to use only battery cells produced in Europe, with a resulting 50% lower carbon footprint given they wouldn’t be imported from China, by early 2023. It already sources its e-bikes from Europe.

Jason Schretter, partner and head of EMEA at Raine Group, said: “We are excited to continue our support of Voi in its efforts to bring safe and sustainable micro mobility solutions to markets across Europe. Since we first invested a year ago, Voi’s commitment to product innovation, operational efficiency and local partnerships have helped the company extend its leadership position in the region.”

Per Brilioth, CEO of VNV Global said: “We are reaching a tipping point with micromobility where cities, led by their residents, are waking up to the full potential of this new mode of transport.”

But scooter companies continue to battle the bad publicity from the grisly accidents and crashes currently blighting the image of this, admittedly hot, sector.

Where is suptech heading? – TechCrunch

How to build inner resilience