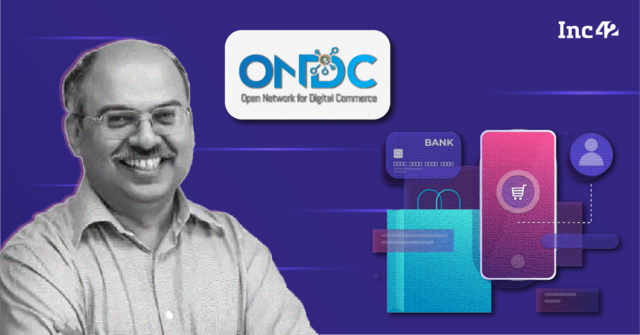 ONDC is in talks with 200 firms, including banks, corporates, and payment firms, to onboard them on the network

Unicorns such as OYO, Swiggy, Zomato will be onboarded during the next phase of the ONDC initiative

The Open Network for Digital Commerce (ONDC), an initiative backed by the government, is already one of the most talked about projects. It aims to tap the country’s flourishing ecommerce market, which, according to a report by Inc42, will provide a $400 Bn opportunity by 2030.

The initiative, which was launched on April 29 this year, is running on a pilot basis in several cities of Uttar Pradesh and is targeted to cover 100 cities by the end of 2022.

ONDC, which was floated as an initiative on the lines of the United Payments Interface (UPI), is already in talks with 200 companies to onboard them on the network, ONDC Chief Business Officer (CBO) Shireesh Joshi told Inc42 in an exclusive interaction.

Numerous media reports have claimed that the ONDC initiative is aimed at breaking the duopoly of US-based e-tailer Amazon and Walmart-backed Flipkart.

Joshi, however, negated these claims and said that the network will be as beneficial to exist large players in the industry as it will be to new sellers.

“We are not here to challenge Flipkart, Amazon. We are essentially ecommerce enablers helping the small retailers leverage the digitisation of commerce through our network,” Joshi noted.

“There have been numerous reports in the media falsely saying that ONDC will challenge Amazon and Flipkart, or even impact their revenues. These are not true,” the ONDC executive added.

Why ONDC Is Not A Challenger To Amazon And Flipkart?

Explaining why ONDC cannot be a challenger to the existing ecommerce companies, Joshi said that the ecommerce industry is in a very nascent stage in India compared to countries like the US and China. A recent report by Goldman Sachs said that China continues to dominate the global ecommerce market with a 45% market share. The penetration of ecommerce in China and the US stands at about 24 % and 20%, respectively.

In India, Joshi said, the reach of digital commerce within the retail sector is just 4-5%, which means there is room for more market players as well as disruption.

Hence, ONDC would, at its core, be a technology that enables a network to onboard millions of retailers, sellers and potential customers via buyer-seller-facing applications, thus creating a homogeneous market.

“The goal is to take the 4-5% ecommerce penetration to population scale. Nothing is designed for altering the marketing shares of the existing 4-5%. Ecommerce majors also stand to benefit from being part of ONDC and have business risk if they stay out of it. As such, we expect they too will see it right to join and indeed, some have made public statements to this regard and we welcome them too,” Joshi explained.

According to him, when the ecommerce penetration jumps to about 40-50%, the bigger players, who have been present in the market for a long time, will be the ones to gain disproportionately.

“It is now up to individual business organisations, whether existing ecommerce players or new ones or non-ecommerce players, on what strategies they choose in order to benefit from this once-in-a-lifetime opportunity. That will determine who will do well or not. ONDC itself is democratic and open and not against anyone,” Joshi told Inc42.

He added that some of India’s biggest corporations, including Reliance Industries, Tata Group, financial institutions as well as global big tech firms, are in talks with ONDC to join the platform.

“This is going to be an interesting confluence of lenders, retailers and buyers as well as payment companies so that we revolutionise the ecommerce industry,” Joshi added.

Joshi informed that once the ecommerce marketplaces are successfully onboarded, the next leg of the initiative will see onboarding of food delivery and hospitality services.

“The first domains that have gone live in testing are grocery, food & beverage, and logistics. In addition, we have begun engagements with urban mobility, banking, travel and hospitality, agri sector, apparel and fashion, beauty and personal care as well as consumer electronics ecosystems to begin working towards bringing them onboard in the coming months,” Joshi said.

Responding to a question about OYO, Zomato and Swiggy joining ONDC, Joshi said it will make sense for them to actively consider being on the platform and go live quickly.

“As with ecommerce giants, big tech platforms in these domains (hospitality and food delivery) will also see the benefit in joining ONDC and face business risk if they don’t. It’s early days for these domains and discussions too are at a very early stage,” ONDC’s top executive added.

On the regulatory front, Joshi clarified that ONDC will operate as per the guidelines set under the draft Consumer Protection (Ecommerce Rules), 2020, which stipulates that marketplaces shouldn’t own inventories. Besides, it also calls for regulating mis-selling and cross-selling, and banning flash sales by marketplaces.

The draft Rules add that ecommerce entities should: (i) provide a filter mechanism on their website based on the country of origin, (ii) display notification regarding the origin of goods at the pre-purchase stage, and (iii) display suggestions of alternatives to ensure a fair opportunity for domestic goods.

Notably, Amazon and Flipkart are being investigated by the Competition Commission of India (CCI) after the Delhi Vyapar Mahasangh, an affiliate of the Confederation of All India Traders (CAIT), in a petition in 2020, accused the ecommerce companies of following anti-competitive market practices, including predatory pricing, deep discounting and exclusive agreements with select sellers.

Amazon, and Flipkart have maintained that the companies remain committed to the laws of the land.