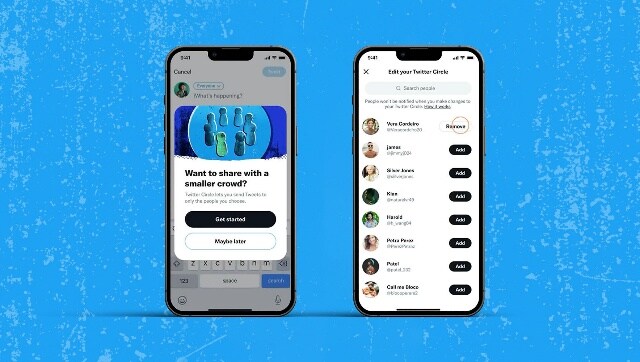 Twitter has finally rolled out its much-awaited ‘Circles’ feature to all users. The new feature allows users to tweet to a certain audience instead of all of their followers. The feature had been released to some users as part of the beta testing program in May.

The feature is now available to all Twitter users across the website, iOS and Android devices. The ‘Circles’ feature on the microblogging platform is similar to those seen on other social media platforms like the ‘Close Friends’ feature on the popular image-sharing platform Instagram.

add up to 150 people to yours and use it. please. pic.twitter.com/D6AE4OhRX5

“With Twitter Circle, people now have the flexibility to choose who can see and engage with their content on a Tweet-by-Tweet basis. This makes it easier to have more intimate conversations and build closer connections with select followers,” said Twitter about the new feature.

With the new feature, users will be able to add up to 150 other Twitter users to their circles, regardless of whether the other users are following them or not. Each user can only have one Twitter circle, however. Users can only see the full list of their own Twitter Circle and cannot see the list of users in another user’s circle. Additionally, tweets sent out to your circle cannot be retweeted. If users don’t want to see tweets from a user who has added them to their circle, Twitter suggests either using the unfollow, block or mute options.