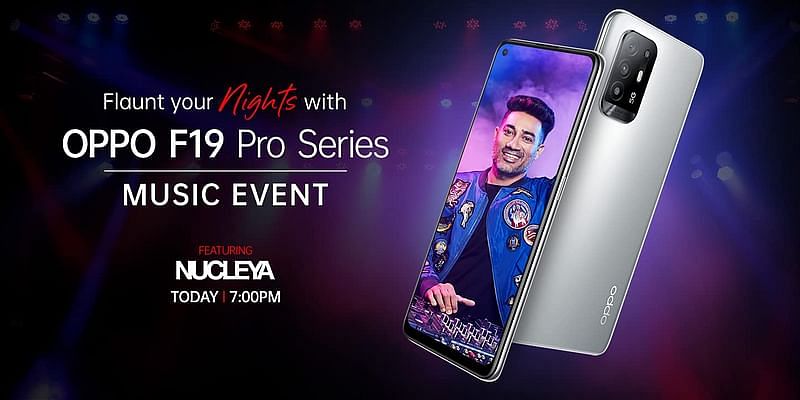 Both phones will be retailed by brick-and-mortar stores and online channels. The Oppo F19 Pro series will also be available on Amazon India.

The Oppo F19 Pro series is expected to get a 6.43-inch super AMOLED display with FHD+ resolution. Storage options are expected to be 8GB of RAM and 128GB of storage by default. A higher 256GB storage option may also be on offer. However, there is no confirmation about whether the company will offer external storage or not.

Powering the base variant Oppo F19 Pro is expected to be a MediaTek P95 chipset. A quad lens setup in the rear will take care of the camera duties. These will include a 48MP primary lens, an 8MP ultrawide lens, a 2MP mono lens, and a 2MP macro lens. The front camera is expected to be a 16MP shooter.

Oppo F19 Pro is expected to be powered by a 4,310 mAh battery with support for Oppo’s proprietary 30-watt VOOC charger.

Oppo F19 Pro+ will be positioned as a premium phone with a MediaTek Dimensity 800U chipset with 5G.  It is also expected to get Oppo’s faster 50-watt VOOC charge.

The company claims that the new Oppo F19 Pro series has an 18 percent less overall lag and a 14.9 percent increase in swipe responsiveness than the outgoing F17 Pro series. It will also get ultra-night video mode and artificial intelligence-backed portrait modes.

The upcoming Oppo Band Style will be fitted with a 1.1-inch full-colour AMOLED display. It can track up to 12 workout modes, including running, walking, cycling, badminton, cricket, swimming, and yoga, among others. The Oppo Band Style can also continuously measure spatial oxygen levels.

It is expected that the Oppo Band Style will have a claimed battery life of 14 days.

How to watch the Oppo F19 Pro series launch

Spry Raises $3 Mn For Expansion In India, Foray Into US