First, it was snakes, and then the endangered pangolin before Asian ferret badgers were put in the dock. Scientists have been scrutinising a Noah’s Ark of animals to find out whether — and how — the coronavirus was transmitted from bats to humans, with the prime suspect changing from one study to another. Cats, dogs, badgers, lions and tigers have also been in the spotlight — not to mention minks, which have been culled in the millions.

After AFP published findings of a report by experts convened by the World Health Organization (WHO) Monday, here is a recap of the suspects.

Scientists were quick to accuse the bat of being the origin from the time the virus emerged in China in late 2019.

A study sponsored by the Chinese Academy of Sciences in January 2020 found that Covid-19 was closely related to a strain that exists in bats, which would be the “native host”.

Bats are hosts for many other strains of coronavirus.

But the scientists say that Covid-19 must have passed through another yet-to-be-identified species known as an “intermediate host”.

A second study published shortly after in the Journal of Medical Virology fingered snakes as the possible culprit.

The report was immediately brushed aside by other experts who said the guilty party was probably a mammal, as was the case with SARS, which came from the civet, a small nocturnal animal prized in China for its meat.

Researchers at the South China Agricultural University said in February 2020 the endangered pangolin, a mammal whose scales are used in Chinese medicine may be the “missing link” between bats and humans. 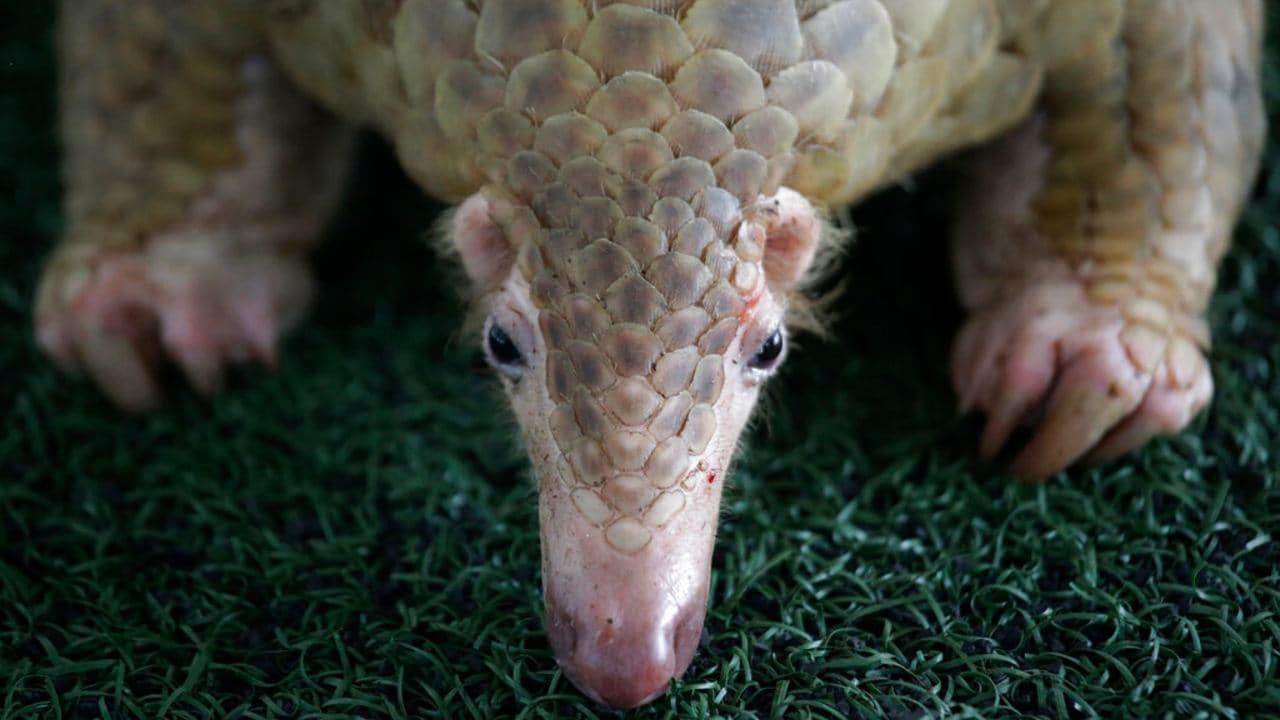 Whether the pangolin is the culprit is not known at this stage. Image credit: AP Photo.

This anteater was one of the wild animals sold at the Huanan market in the central Chinese city of Wuhan, to which most of the first known cases of Covid-19 were linked.

But whether the pangolin is the culprit is not known at this stage.

A pet dog was quarantined in Hong Kong later that same month after it tested “weak positive” to the virus when its owner was infected.

Cases were then reported in cats.

Ferrets and hamsters have also tested positive, along with tigers and lions in captivity.

Scientists have stressed that domestic animals are vulnerable to the virus but cannot infect humans.

Suspicion has also fallen on mink, which are bred for their valuable fur.

In June, the WHO said that Dutch workers apparently infected with the coronavirus by minks could be the first known cases of animal-to-human transmission.

Cases of Covid in mink farms were then detected in several other European Union countries including Denmark, France, Greece, Italy, Lithuania, Spain and Sweden, as well as in the United States. The mink has been suspected as well. Image credit: Flickr/Deborah Freeman

In July tens of thousands of minks were culled in the Netherlands and a month later hundreds of thousands more followed when the government brought forward a total ban on the industry to the end of the year.

Denmark — which had three times more mink than people — ordered all of the country’s 15 to 17 million minks to be culled in November.

Copenhagen warned that the mutation via the mink, dubbed “Cluster 5”, could threaten the effectiveness of any future vaccine.

A mission of international WHO experts who visited Wuhan had no shortage of suspects, from rabbits to ferret badgers to raccoons and civets.

Their long-awaited report obtained by AFP Monday said it was “likely to very likely” that the virus jumped from bats to humans via an intermediate host, but they were not able to say what that missing link might be.

In fact it was also “possible to likely” that the virus jumped directly from bats, they added.

The audio social network is compelling but it also has some very grown-up problems- Technology News, FP

Will all the risks SpaceX is taking to test its Starship rocket pay off?- Technology News, FP

Here’s all we know-India News , FP