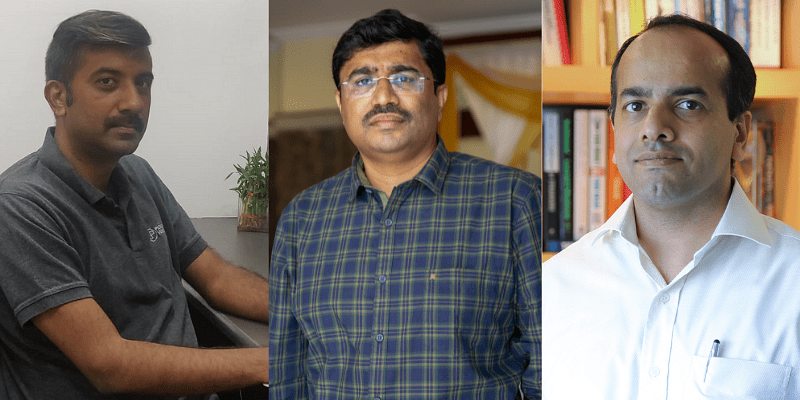 Finding it difficult to track down a good dermatologist, Arun Raghavan, along with Naveen Babu SA – his former boss at Infosys, and Anand Parameswaran decided to dive deep into this problem.

“Skin problems are never taken seriously in our country. Either we will try to find affordable solutions or we will ignore it entirely. Sometimes, the delay can lead to serious problems and many people with significant problems are unable to find a good doctor. They would usually charge high consultation fees and their prescribed medicines might not give the desired results,” says Arun, in a conversation with YourStory. “We are trying to bridge this gap,” he adds.

The trio also has some understanding of the medical space, with Arun’s father being a doctor and Naveen having worked in the sector as a life science consultant through Infosys.

They developed a platform called ﻿eskindoctor﻿, under their healthcare development firm Mumbai-based pNaia Technologies Limited that went live in September 2020. Its offices are in Bengaluru as well.

Developed as a web portal that lets people directly upload a photo of their skin problems, the platform uses artificial intelligence-led bots that scan the picture to diagnose potential skin diseases. Patients can then decide if they want to go ahead and get a doctor consultation, which is chargeable at around Rs 200.

“We have introduced this as a free version to get more people to use our system. The suggested potential skin problems help our professional dermatologists to gain insight into the patient’s case without taking up too much consultation time,” says Arun, Co-founder at pNaia Technologies, which runs eSkinDoctors.

An official WhatsApp page has also been created for people to get consultations.

“Everyone is on WhatsApp. Having a presence across WhatsApp has become even more important than having an app because everyone, be it in cities or villages, uses the messaging platform,” says Naveen.

eSkinDoctor’s Android app is also currently in the works and will be launched soon.

The firm was founded in May 2020 by Arun, a software developer who used to work with Infosys. He was joined by Naveen – a computer science specialist with more than two decades of experience across Infosys, Mindtree, and Wipro, among other roles, as well as Anand, an MBA graduate who has worked across Godrej and Wipro’s consumer arms, among many other roles spanning over two decades.

In their initial days, the founders were majorly focused on developing the AI-driven platform for skin consultations as they wanted to provide patients with a diagnosis for smaller issues.

“Arun has developed the entire software on his own,” says Naveen. This helped the firm keep its costs down by not having to hire computer engineers in the initial days. Currently, the team has five full-time employees.

The platform was also incubated at the International Institute of Information Technology (IIIT) in Hyderabad in November 2020, and also raised between Rs 16.6 lakh and Rs 20 lakh in an angel funding round.

At least 60 percent of the users on the platform come from small towns and rural areas across the country, including Uttar Pradesh, Bihar, Jammu and Kashmir, and Assam.

“People usually go for free consultations first and then opt for paid consultations with the doctor. It takes some time for them to get used to the platform. But once they stick around, the retention rate is very high,” says Arun.

The competition and growth

While Arun and Naveen did not reveal the number of consultations happening on the platform daily as the platform is still under development and is operating at a nascent stage, they estimate that at least 50-60 people opt for the paid consultation services every month.

“Our growth is majorly happening through word of mouth as we have not spent much on marketing the platform. But after raising our seed round, we will be doing more marketing. Also, the doctors also on our platform are very specialised dermatologists,” says Arun. While he did not reveal the timeline on the fundraise, he says they are looking for investors but things have not been finalised yet.

The firm as of now is directly in competition with the Y-Combinator backed CureSkin, a Bengaluru-based skin diagnostics startup run by Heallo Online Health LLP. The firm offers skin diagnosis, treatment and even in-house skincare products for treatment. Local dermatology firms and branded diagnosis clinics including Kaya Skin Clinic are a few indirect competitions for eSkinDoctor.

Currently, there are at least five dermatologists giving consultations on the platforms, who were onboarded after observing their work history. They were also “highly recommended” by people in the medical circle.

“Dermatological problems are really big in India. But since it is not something that everyone needs, we have the liberty to get doctors with the highest qualifications and also keep developing our product,” says Arun.

How the power of the cloud will evolve the gaming ecosystem

Qualcomm Design in India Challenge 2022 finalists announced; the startups cover it all from robotics to health tech

Users will need to be aware of the technological changes that will drive the meta-ecosystem, writes Fabrik’s founder