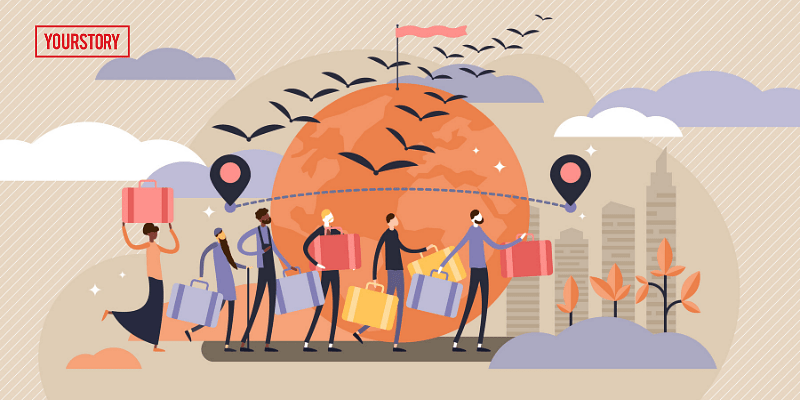 After more than a year of shut borders, closed embassies, and people stuck at home amidst the COVID-19 pandemic, the world is on the move again. And, many people took the time to reassess their lives.

The volume of migrants moving from one country to another is rising quickly, and this growth is projected to accelerate. Over the last two decades, the number of international migrants living outside their home country has grown from 173 million in 2000 to 281 million in 2020.

Education, work, infrastructure, remuneration, and quality of life have always been the key reasons for people to want to migrate. Since the pandemic, access to healthcare and vaccinations can also be added to that list.

The US continues to be the most sought-after location for foreign nationals to relocate. A UN Department of Economic and Social Affairs report states that two-thirds of the world’s immigrant population is concentrated in 20 countries.

The United States is the highest receiver of foreign migrants, housing an estimated 51 million immigrants. In fact, US President Joe Biden is generally regarded as more welcoming of immigrants than President Donald Trump.

The Biden administration has a complex relationship with immigration and tellingly did not actively overturn the ban on H-1B visas imposed by Donald Trump during COVID-19, preferring to let it expire naturally three months into his administration.

While work visas like the H-1B will continue to be under scrutiny, visas that attract business and entrepreneurs are less controversial. The E-2 visa, which allows you to invest and run a business in the US, remained open to applicants throughout the pandemic.

In fact, E-2 visa holders can obtain National Interest Exceptions to travel to the US despite the closed borders. Indians are not directly eligible for the E-2 visa and must first obtain Grenada Citizenship by Investment to avail themselves of this visa.

Underscoring the US’ commitment to entrepreneurs, the Biden Administration introduced the International Entrepreneur Parole (IEP) Programme, which allows founders and managers of promising startups to reside in the country to grow their business temporarily, has further strengthened belief in the system.

Perhaps one of the biggest shifts in the US immigration options for Indians in recent months is the reduction in the minimum investment threshold for its EB-5 Golden Visa programme.

The Green-Card-by-Investment requirement dropped from $900,000 to $500,000 in June. Moreover, the US Congress is renegotiating the terms of the EB-5 Regional Centre programme, but Direct EB-5 remains open to new applicants at reduced investment requirements.

Similarly, interest in migrating to Europe is on the rise, especially among Indians. Portugal, Greece, Italy, and the UK are among the most popular destinations for relocation.

Popularly known as the EU’s Blue Card system, skilled migration to Europe has seen a boost due to the relaxation of imposed conditions five years ago.

In fact, early COVID-19 vaccination for all EU residents also contributed to the rising interest in relocating to the nation. Besides, residency by investment programmes is also gaining significant traction for these European cities.

The Italian government announced the reduction of the investment required for its golden visa by 50 percent, considering the economic losses brought about by the global pandemic.

Portugal and Greece, too, encouraged investment migration by highlighting the investor-friendly culture with Golden Visa offerings that can be accessed at a lower minimum investment amount compared to other countries.

The UK is changing its immigration landscape in the wake of Brexit, which may present opportunities for Indians as the country shifts away from migration from Europe.

The detail is still worked out, but options include an investor visa, a startup visa, an entrepreneurial visa, and a visa for global talent.

Despite border restrictions, Australia — a popular destination among Indians — attracts a major piece of the global migrant population.

The country announced eight immigration and visa-related changes in July, which came into effect given the demands of the workers employed in some critical sectors of the economy.

Some of these changes include the extension of The Priority Migration Skilled Occupation List by adding 22 new occupations, introducing a new stand-alone agriculture visa extended to 10 ASEAN countries, and increasing Australian citizenship costs.

The movement to Australia is also receiving an increased interest post the pandemic owing to the efficient way the country handled the first and second waves.

India continues to be a major source of skilled talent in the UAE. In recent times, the UAE has also announced liberalised immigration policies that increasingly attract the global populous.

One of the most significant steps the UAE took in this direction was promoting its Golden Visa programme, which encouraged investment in the country for foreigners to live and work in the nation without any sponsor freely.

The exciting aspect of this golden visa programme is that it is keen on inviting entrepreneurs, investors, and individuals of specialised talents.

Furthermore, UAE also launched a new Green Visa, wherein foreign residents can sponsor their parents and children up to 25. Besides, the nation also announced a Freelance Visa in line with its new system of giving long-term visas to migrants.

These visa categories are now enabling interested immigrants to consider a long-term future in the UAE instead of a short stint earlier prevalent among migrants.

Moreover, countries like Grenada, Canada, New- Zealand, and others continue to be a magnet for international migrants. While trends in the industry are ever-evolving, it is essential to realise that it is human nature to keep moving.

While the decision-making process for permanent relocation is a long-standing and thought-through process, it will remain at the centre stage of personal and professional growth among communities worldwide.

These proptech startups are working to transform the real estate sector