Pros:
– The design still looks fresh and something out of a modern art gallery.
– Formaldehyde removal functionality.
– Easy setup and usage.
– App interface and app-based functionality.

Cons:
– Very expensive compared to other air purifiers.
– Dyson uses too much single-use plastic in its packaging
– The noise of the fan.
– Limited functionality of the remote.

We live in a time where the environment that we live in, the very air that we breathe has the potential to kill us. Ask any medical professional who deals with patients suffering from asthma, and they will swear on their lives about just how important an air purifier is.

Now although there are a number of options to go from, in one’s search for an air purifier a person will invariably come across something that bears the name Dyson. Dyson has a reputation for over-engineering its products, so naturally, in a sea of regular box-sized air purifiers, their air purifiers do stand out. Dyson does not sell you just a piece of tech, but also a piece of art.

Furthermore, they seem to be consistently pushing the envelope on a number of things. Apart from stuffing their products to the brim with new innovations, Dyson also pushes the boundary on what some would consider value for money.

It is no secret that Dyson products are very expensive. Dyson Purifier Cool Formaldehyde TP09 is no different. But how good is it as an air purifier and more importantly, is it worth the money that Dyson charges for it? We try to answer that question.

Formaldehyde is a gas pollutant, which is released by furniture and wooden objects that have been made using formaldehyde-based resins. Materials such as plywood and fibreboard, insulation and do-it-yourself products such as paint, wallpapers, varnishes and household cleaning products can all release formaldehyde.

It is about 500 times smaller than 0.1 microns, is particularly difficult to capture and, when left undetected, can be trapped in a home for years. Prolonged exposure can cause severe asthma and degradation of lung tissue.

It can even cause high levels of formaldehyde can cause myeloid leukaemia and other rare cancers around the nasal cavity, and pharynx.

Once you have removed the air purifier tower and the HEPA+ Carbon filter and catalytic filter from their packaging, you just need to set the tower upright. 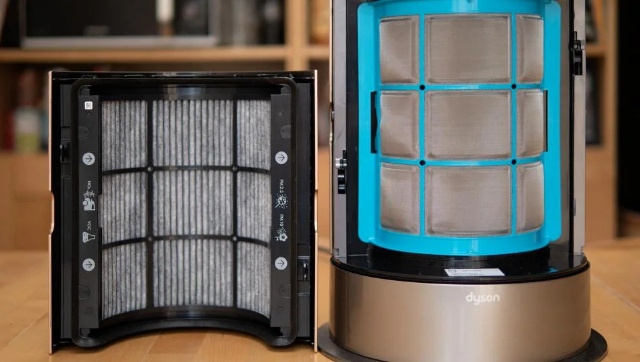 Do keep in mind that the remote is placed in a box of its own. Open the filter cover or the grille by simply undoing the latch, and then insert the filters.

The catalytic filter goes in first, followed by the HEPA+ Carbon filter. Once these have been inserted, simply place the grille back on and lock it in place using the latches on the grille. Your air purifier is all set to be plugged in, ready to be used. 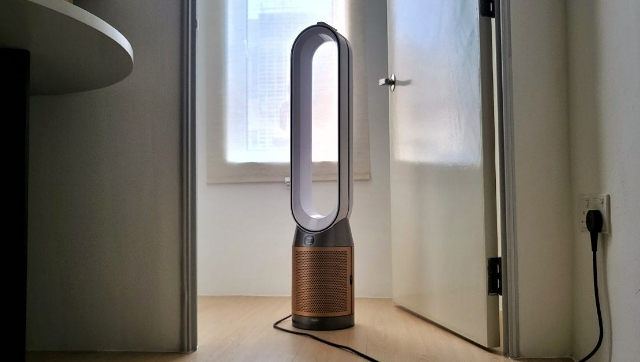 The design that Dyson has chosen gone for the Purifier Cool Formaldehyde is something that they had established with their bladeless fans and air purifiers quite some time back.

This new air purifier weighs 4.86 kilograms, about 105 centimetres tall, and 22 centimetres wide. This variation is available in a couple of colours, White and Gold. Our test unit had the gold colourway which is a rather elegant and beautiful-looking copper-like colour.

While the main body of the air purifier is white in colour, the accompanying remote, as well as the outer filter cover, is in that lovely copper colour. 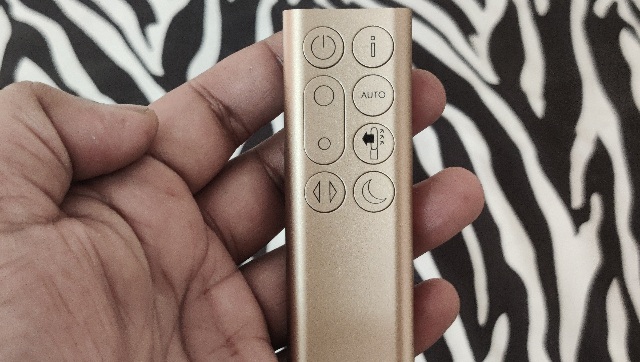 Because of the tall design, the filter takes up very little space on the ground and can be placed in a stuffed room as well. Just ensure that there’s room for the Purifier Cool Formaldehyde to oscillate and that the base has ample area around it to suck the air in.

Thanks to the small display on the base unit, you get real-time readings of the quality of the air in a room, and how well your new air purifier is working.

When it is in auto mode, the air purifier constantly monitors the quality of air in the room, by keeping an eye on the levels of PM2.5, PM10 and formaldehyde levels in the air. It will adjust the speed of the fans accordingly and purify the air until the level of pollutants falls back to what it ideally should be.

Once it has reached those numbers the air purifier will slow itself down and eventually go back to sleep, but still continue to monitor the quality of air. 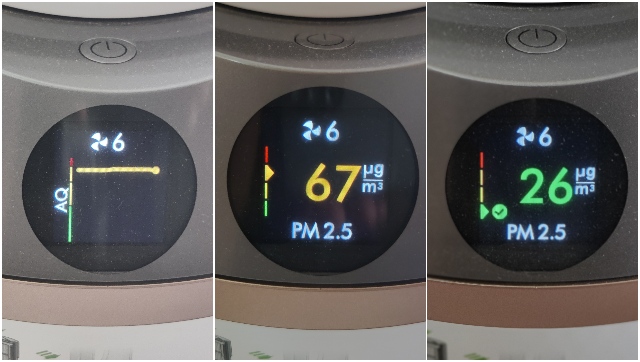 The fan function of the air purifier works moderately well. Up to level 6 or so, you can barely hear the purifier working. Anything over that is slightly audible, but not so much so that it can be called disturbing.

When at level 10, the fans make some considerable sound. If you have placed the air purifier next to your workstation at your home, you will be distracted by the constant humming noise it makes. The fact that it oscillates within 350 degrees though, helps you overlook the noise.

Don’t expect the tower to cool you sufficiently, it is not capable of doing that, even with the fans and other settings cranked up to 10. But then, it was never meant to do that.

The tiny LCD screen on the air purifier is a nifty touch. Not only does it show the quality of the air and the level of pollutants in a room in real time, it also helps in setting the air purifier up manually should you choose to do so.

There’s also a night mode which works rather brilliantly and works without making any noise.

Dyson Purifier Cool Formaldehyde: The app integration
Apart from the remote, users can also control the air purifier using the Dyson Link app. The app works without a flaw and is very convenient to use.

The app is also loaded with additional features, so much so, that after a few days, one would like to ditch the included remote and control the purifier only through the app. Setting it up and connecting it to the air purifier is again, very easy and intuitive. The homepage gives you all the relevant information you’ll need if you’re closely monitoring the air.

The app is well designed and very intuitive to use. The secondary page gives you all the relevant numbers in a very concise and clear manner. These mainly include the PM10, VOC and NO2 levels, the three biggest air pollutants.

It also lets users to closely monitor the levels of each of the major pollutants, including formaldehyde. It also shows you the levels of different pollutants by the hour, day and week, and helps users to monitor their surroundings and sources of pollution in a better manner. The app also lets users to switch the air purifier on from a completely different part of the city, as long as the air purifier has been plugged into a power socket. Users can also create schedules where the air purifier will turn on automatically and powers down automatically as well. The app also pulls up data from the internet to show you a rather comprehensive AQI report of your city and compares it to the air in the room. The app will also inform you when you need to change the filter, which, in a city like Delhi, would be every 8-10 months.

Conclusion: Is the Dyson Purifier Cool Formaldehyde worth the money?
The addition of formaldehyde purification is a nice feature and something that most air purifiers lack.

If your doctor has advised you to keep an eye on your formaldehyde exposure, then going for the Purifier Cool Formaldehyde is almost a no-brainer.

However, if that is not a concern, there are many other air purifiers for half the cost that would do the trick. You will be giving up a few conveniences and features, but it will get the job done.

Eight key takeaways from the IPCC report that prove we need to put in the work to fight climate change- Technology News, FP