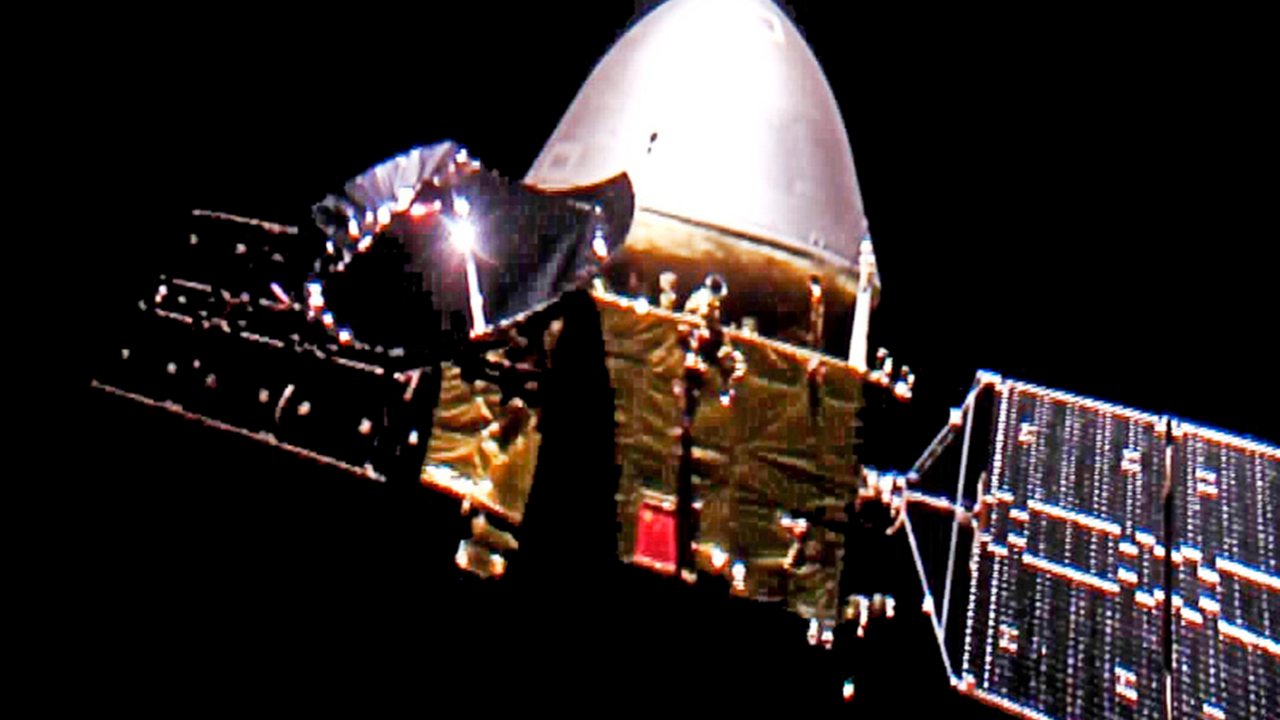 China says its Tianwen-1 spacecraft has entered a temporary parking orbit around Mars in anticipation of landing a rover on the red planet in the coming months. The China National Space Administration said the spacecraft executed a manoeuvre to adjust its orbit early Wednesday morning Beijing time and will remain in the new orbit for about the next three months before attempting to land. During that time, it will be mapping the surface of Mars and using its cameras and other sensors to collect further data, particularly about its prospective landing site.

That follows the landing of the US Perseverance rover last Thursday near an ancient river delta in Jezero Crater to search for signs of ancient microscopic life. Tianwen is the title of an ancient poem that means “Quest for Heavenly Truth.” The solar-powered vehicle, about the size of a golf cart, will collect data on underground water and look for evidence that the planet may have once harboured microscopic life. Image credit: CNSA via AP)

A successful bid to land Tianwen-1 would make China only the second country after the US to place a spacecraft on Mars. China’s solar-powered vehicle, about the size of a golf cart, will collect data on underground water and look for evidence that the planet may have once harboured microscopic life.

Tianwen, the title of an ancient poem, means “Quest for Heavenly Truth.”

Landing a spacecraft on Mars is notoriously tricky. About a dozen orbiters missed the mark. In 2011, a Mars-bound Chinese orbiter that was part of a Russian mission didn’t make it out of Earth orbit.

China’s attempt will involve a parachute, rocket firings and airbags. Its proposed landing site is a vast, rock-strewn plain called Utopia Planitia, where the U.S. Viking 2 lander touched down in 1976.

Tianwen-1′s arrival at Mars on Feb. 10 was preceded by that of an orbiter from the United Arab Emirates. All three of the latest missions were launched in July to take advantage of the close alignment between Earth and Mars that happens only once every two years.

Tianwen-1 represents the most ambitious mission yet for China’s secretive, military-linked space program that first put an astronaut in orbit around Earth in 2003 and last year brought moon rocks back to Earth for the first time since the 1970s. China was also the first country to land a spacecraft on the little-explored far side of the moon in 2019.

China is also building a permanent space station and planning a crewed lunar mission and a possible permanent research base on the moon, though no dates have yet been proposed.

On Monday, a massive Long March-5B Y2 rocket was moved into place at the Wenchang Spacecraft Launch Site in Hainan province for assembly and testing before it launches the space station’s core module, christened Tianhe. The launch is scheduled for the first half of this year, the first of 11 missions slated over the next two years for the station’s construction.

China is not a participant in the International Space Station, partly at the insistence of the United States.

The space program is a source of enormous national pride in China and Tianwen-1 has attracted a particularly strong following among the public. Tourists flocked to tropical Hainan island to watch the launch, while others visit mock Mars colonies in desert sites with white domes, airlocks and spacesuits.

Meteorite ‘older than Earth itself’ could shed light on how protoplanets form- Technology News, FP