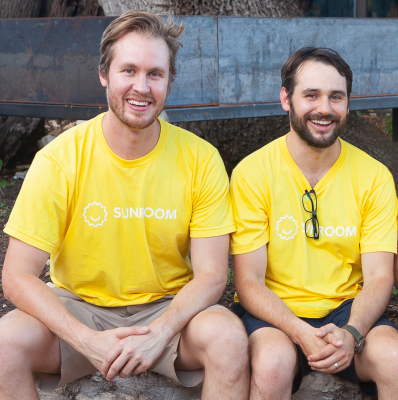 Real estate tech startup Sunroom Rentals, which leases units on behalf of property managers and apartment owners, has raised $11 million in a Series A round of funding led by Gigafund.

Ben Doherty and Zachary Maurais, former founders of the delivery app Favor, launched Sunroom in May 2018 with the mission of “boosting the profitability” of mid-size property managers and apartment owners by giving them a way to outsource their leasing operations.

The pair sold Favor to Texas grocer H-E-B in 2018 and soon after shifted their focus on building out Sunroom. The Austin-based company has developed an app that it says gives renters a way to tour, apply for and lease a unit “entirely online.” COVID-19 has led to more renters wanting virtual ways to explore and secure rental units. Mobile-first, Maurais noted, is particularly appealing to millennials and Gen Zers.

“Personally, we love to create products that fulfill consumer’s most basic needs,” said Maurais, the company’s president. “With food under our belt, we decided to focus on housing.”

While one might wonder what the parallels between food delivery and housing might be beyond fulfilling consumers’ needs, CEO Doherty said the rental market in 2021 looks a lot like the food delivery market in 2013.

“In 2013, Grubhub had successfully put many restaurant menus online, but most of the transactions and delivery process was still offline,” he told TC. “We’re in a similar position with the rental market, as the majority of rental listings are online, but touring, applying or leasing units is still done offline.”

Since its launch, Sunroom Rentals has signed more than 2,000 leases and had over 100,000 renters sign up for its services in fast-growing Austin, where it focused its initial efforts.

“According to the U.S. Census, that represents roughly 10% of renters in the greater Austin metro,” Maurais said. “Instead of going shallow and wide nationally, we decided to go deep in markets, in an effort to gain network effects, which was a strategy that worked well for us at Favor.”

Looking ahead, the company will use the funding to expand across Texas, including in Houston, San Antonio and Dallas. It will also invest in its partner portal, which aims to give owners and property managers a way to view real-time data on leasing performance.

Sunroom Rentals currently has 18 employees with the goal of more than doubling its headcount this year. It’s in particular looking to hire across its engineering, product and sales departments.

As mentioned above, Gigafund led the Series A financing, which included participation from NextGen Venture Partners, Calpoly Ventures and a slew of angel investors, including Gokul Rajaram (Google & Square) and Homeward’s Tim Heyl, among others. Existing backers include Founders Fund Seed, Draper Associates, Boost VC and Capital Factory (among many others). The round marked Sunroom’s first “priced” round, meaning the first time it’s given up stock.

Jonathan Basset, managing partner at NextGen Venture Partners, believes Sunroom was essentially in the right place at the right time and “on trend with touchless leasing even before COVID hit.”

“I watched them build a profitable consumer marketplace in a competitive market with Favor and was impressed with them as operators,” he said. “These businesses have a surprising amount of similarities and I’m confident they can rise to the challenge.

Last week, TC reported on the raise of another startup operating in this increasingly crowded space. Seattle-based Knock — a company that has developed tools to give property management companies a competitive edge — raised $20 million in a growth funding round led by Fifth Wall Ventures.

Knock’s goal is to provide CRM tools to modernize front office operations for these companies so they can do things like offer virtual tours and communicate with renters via text, email or social media from “a single conversation screen.” For renters, it offers an easier way to communicate and engage with landlords.

How Duolingo became a $2.4B language unicorn – TechCrunch