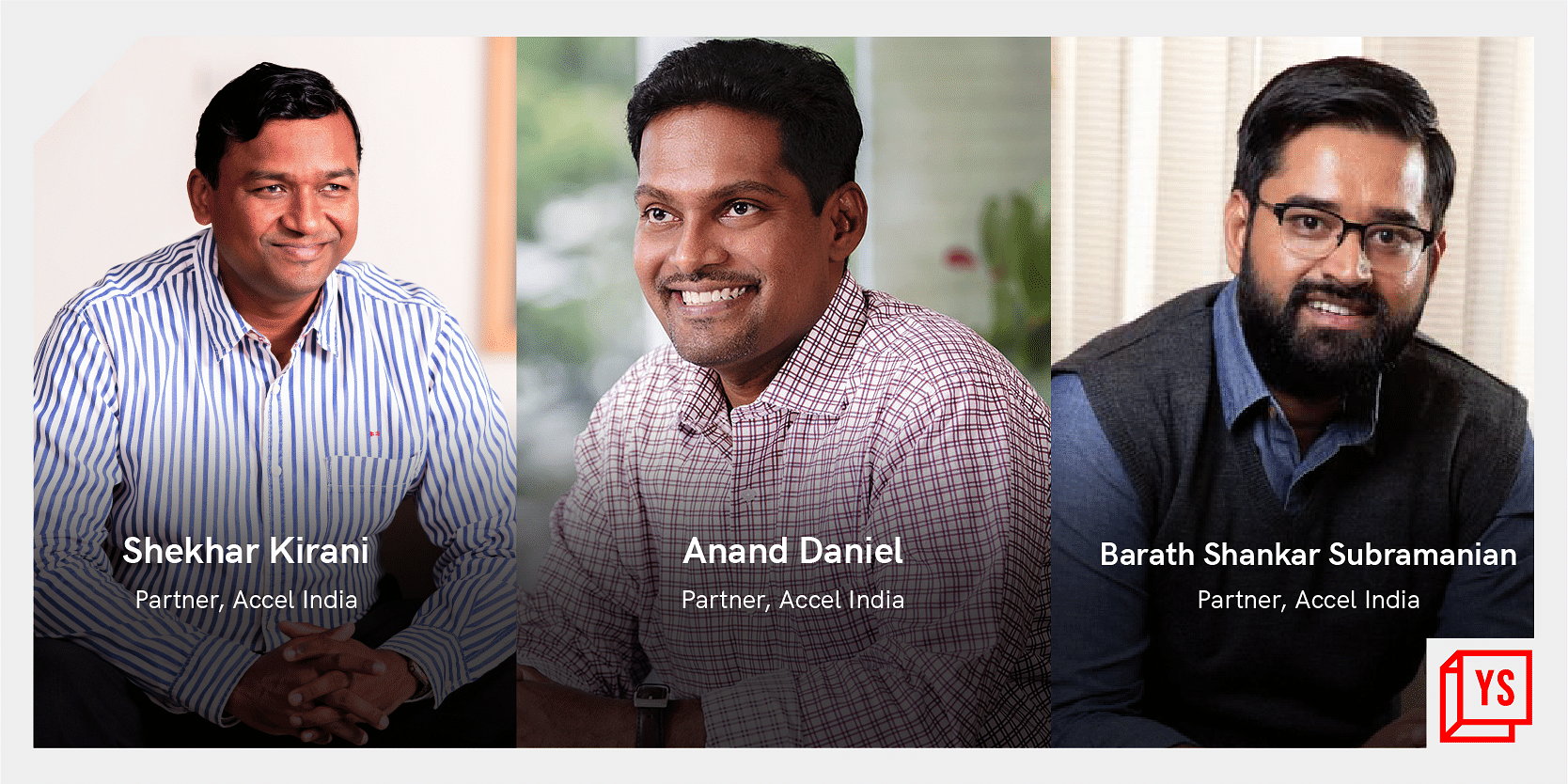 On Tuesday, venture capital firm ﻿Accel﻿ announced its seventh fund for India. At $650 million, Accel’s latest fund is its single-largest one yet for early-stage tech ventures in India and Southeast Asia.

Apart from this, Accel has a $1.7-billion Growth Fund, and a $2.3-billion Leaders Fund, a vehicle that has backed late-stage companies from India like ﻿Eruditus﻿, ﻿Swiggy﻿, and ﻿BrowserStack﻿.

In this interview with YS, Accel’s Shekhar Kirani, Anand Daniel, and Barath Shankar Subramanian throw light on how it built the seventh fund amidst the pandemic, the bright spots in India’s digital economy — and what has remained constant in Accel’s India journey.

YS (YS): Was this the most efficiently-raised Accel fund for India, considering that the previous one was closed before the COVID-19 pandemic?

Shekhar Kirani (SK): We have a select group of LPs (limited partners) in the high double-digits that we work with. They have been with us for a long time — from when Accel’s India funds were small and when they were not exposed to India.

As our fund size is becoming bigger, and our Fund 2 and Fund 3 started to do well, we are able to expose that to a bigger audience within our Accel LP pool.

Usually, we met people face to face — one week in the East Coast, and one week in the West Coast. But this time, we did everything over video calls and were able to close it.

If this is the way it happens, it makes it a lot easier for future fund-raises. But at the end of the day, these are long-term relationships.

We still want to meet them face to face, and there’s a lot of exchange of knowledge. A lot of LPs give us insights and learnings about what is happening in other funds in India and Southeast Asia, as well as globally, and what’s happening in China, where the interests are moving, their questions and concerns.

Some of these discussions are much harder to get through Zoom calls. So, from a fund-raise perspective, it was very efficient. But in terms of extending the relationship and making it broader and sweeter, we have to meet them the next time we go to the US.

YS: What are the kind of returns the previous funds have fetched?

SK: We have done amazingly well with Fund 2, which is now more than 10 years old — our ‘Flipkart’ fund. That was a small fund and Flipkart was a massive exit. We still own some equity in ﻿Flipkart﻿. But many other companies in that fund are also doing well. From an IRR perspective, it is a massive return.

And in Fund 3, which is close to 10 years, we have ﻿Freshworks﻿, ﻿Chargebee﻿, ﻿MindTickle﻿, ﻿TaxiForSure.com﻿ (now ﻿Ola﻿), we have several high-quality companies, of which Freshworks has gone public. So, these two funds are starting to return money back to our investors.

Funds 4, 5, and 6 are still early. We are in Swiggy, ﻿Urban Company﻿, ﻿Zenoti﻿, and several unicorns that are scaling. Overall, we are very happy with how each fund has been constructed.

We are always oversubscribed. It’s more about how much to allocate to each investor, and make sure we keep our promises in return.

YS: Both Flipkart and Freshworks took 11-12 years to show returns with their respective exits. How do LPs look at tech ventures from India with that kind of timeframe?

SK: Even in the US, the median time for companies to go public or do an IPO (initial public offering) is 10+ years. It will take time when founders want to build a high-quality company with a phenomenal team, great market, great user- and customer-base with durable unit economics that can last and continue to hold.

This would have taken 15 or 16 years in India. But thanks to the revolution in digital infrastructure, as well as mobile and 4G proliferation, that time frame is shrinking to 10+ years. What we represent to our investors is: It’s not a five-year but a decade-plus journey.

Anand Daniel (AD): Companies are scaling faster. If you look at how the 2015-vintage companies like Swiggy and Urban Company have scaled in seven years, it is much faster than the previous batch of consumer-tech startups.

That is a good indicator of the market evolving. Hopefully, that will expedite some of the exits. But that is yet to be seen.

YS: What has changed since Accel raised its last fund for India?

Barath Shankar Subramanian (BSS): We have seen significant movement in the portfolio in the past two years.

When we raised our last fund in 2019, the market value of our portfolio companies was $40 billion. Today, it is north of $100 billion.

Both — Flipkart’s exit to ﻿Walmart﻿, and Freshworks listing on the NASDAQ — were iconic events in India’s tech ecosystem because we showed that money can go back to the investors. Many of our companies are pathbreaking in the sectors they operate in.

Our focus is the same: get in early, roll up our sleeves, and work with these companies and founders in building impactful outcomes. With the new fund, we will continue to do more of this on the back of a large domestic digital economy.

The past couple of years has been an inflexion point in terms of what is happening here. Around $100 billion of India’s GDP has been digitally influenced in 2019, which has gone up to $250 billion in 2021. In five or seven years, that will further go up by 3X to touch $800 billion.

India is going to have massive companies emerge out of India. So, what we think is large is probably the starting point. Some of the large companies are going to get larger.

This is on the back of a lot of investments that have happened in solving basic digital infrastructure. When Flipkart started, they had to build an ecommerce business, solve for payments and logistics.

Today, a lot of that has been solved through massive investments by the government and adoption by people across the country—UPI, Fastag, GST, CoWIN. We are seeing that these platforms can be built at scale. On the back of that, founders can potentially build large businesses.

This is translating to a lot of the sub-sectors — ecommerce, which is proxy for what is at the top of the consumer funnel of 200 million transacting users. We are seeing that flow into wealth-tech, edtech, health-tech and many other sectors.

We are seeing that play out in terms of how companies are scaling. The 200-million base of transacting users will go to 600 million in the next five or seven years, which is why we are super-excited about the potential. We are seeing a lot of this also happen in parallel regions, like Southeast Asia.

YS: Given that funding has accelerated the growth of startups in India, do investors have to encourage board governance relatively earlier than before?

SK: Board governance and founder check are extremely important for Accel. If (we are) in doubt that the founder is not aligned to the way Accel thinks — people who are down to earth, humble, friendly, thinking about the long-term rather than about making a quick buck and run — it’s less likely we will invest even if it is the greatest idea and if there is the greatest demand for the company.

Internally, there are enough examples where we have walked away from companies because we are not sure about the founder.

Yes, in a portfolio of more than 200 companies, some bad apples may show up. But we are very careful. We highly reference them. We look at who introduced them. We get into details of them, and so on.

Board governance is important. But fundamentally, it is more important if the founder is a good person or a bad person. That is the starting point.

If the founder is a bad person but plays with the style of a good person, and then brings in massive governance, it will fail. Board governance is for people who are good, want to do good, and take the help from the board on how to make it good.

So, what we look for are the right mindset and right behaviours.

YS: Has the process of finding tech ventures become more intense since the COVID-19 pandemic started?

SK: Not much has changed from an Accel perspective. But yes, India has reached a point now where the quality of founders is amazing and the quality of teams is amazing. And, there is going to be a lot of fight.

We need to find the right category, entry point, and the best potential way to build these companies out. Earlier, we used to give a $2.5-million or $3-million early cheque to founders. Now, we have got Atoms to find the best founders and startups even earlier.

With Atoms, we are going further down. [Atoms is an Accel initiative for entrepreneurs to raise $250K in non-dilutive capital, and get 1:1 mentoring from successful entrepreneurs.]

More than 3,000 people applied for Accel Atoms. We selected 15 people. Many of them are starting to raise the next round.

We want to make sure that it is meaningful work between us and the founders to build iconic and durable companies that will outlast them, as well as potentially go IPO — less naatak, more real.

Beyond the fanfare and SEC warnings, SPACs are here to stay – TechCrunch

Every startup wants an extension round, but there aren’t enough to go around – TechCrunch

With the right tools, predicting startup revenue is possible – TechCrunch