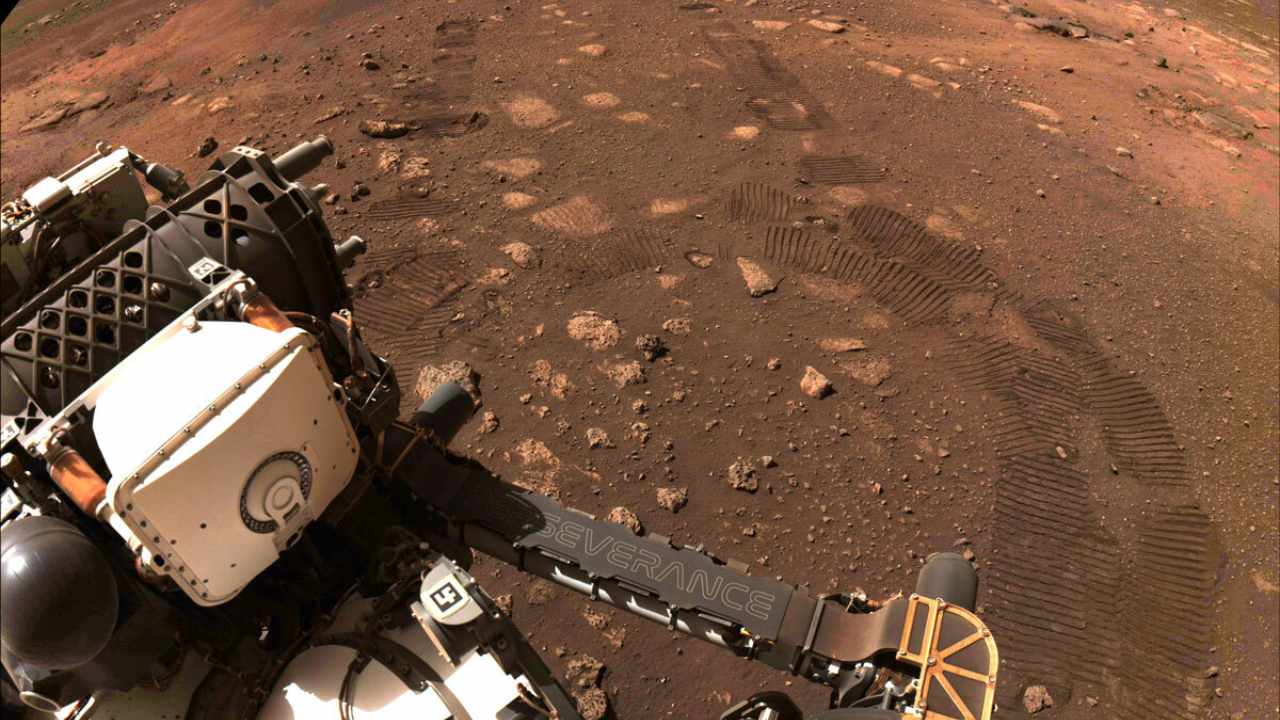 NASA’s newest Mars rover Perseverance has put 21 feet, or 6.5 meters, on its odometer in its first test drive on the Red Planet. The rover ventured out of its landing site in the Jezero Crater, two weeks after setting down on the red planet to seek out signs of past life. However, the drive served as a mobility test – one of many milestones that members of the Perseverance team will test and calibrate on the rover before it takes on any science missions. The back and forth drive lasted just 33 minutes, and went so well that more driving was scheduled for Friday and Saturday for the six-wheeled astrobiology robot.

The drive saw Perseverance move forward some 13 feet (4 meters), take a 150-degree left turn, and move 8 feet (2.5 meters) in reverse. The rover team shared images of tracks left behind during the drive, over and around small rocks, in a statement.

Perseverance landed right on the edge of what makes a potential helicopter landing strip — a nice, flat spot. The plan of action for Percy is to drive out of this landing strip, ditch the pan, then return to catch Ingenuity’s test flight. Before the car-size rover can head for an ancient river delta to collect rocks for eventual return to Earth, it must drop its protective “belly pan” and release the experimental helicopter Ingenuity.

Taken during the first drive of NASA’s Perseverance rover on Mars on 4 March 2021. Image Credit: NASA/JPL-Caltech

The rover team is debating whether to take the smoother route via a nearby delta, or a potentially tougher route with intriguing remnants from that once-watery time on Mars 3 to 4 billion years ago.

On 26 February, the Perseverance rover’s eighth Martian day (sol) after landing, mission controllers also completed a software update, replacing the program that assisted in its landing, with one they will rely on to study the planet. NASA scientists also announced Friday that the side where Perseverance made a touchdown has been named in honor of the late science fiction writer Octavia E Butler. Butler grew up next door to NASA’s Jet Propulsion Lab in Pasadena, and was one of the first African American person to receive mainstream attention for her science fiction works, which included ‘Bloodchild and Other Stories’ and ‘Parable of the Sower’, etc, according to a statement from the space agency. The Mars Helicopter, Ingenuity, is a technology demonstration to test powered flight on another world for the first time. It is hitching a ride on the Perseverance rover. Image credit: NASA

Perseverance’s first big job will be to find an airfield where its little helicopter buddy can take off, according to a Space.com report. Mission controllers received the first status report from the Ingenuity Mars Helicopter attached to the belly of the rover, hours after its landing. Ingenuity will remain attached to the rover for the next several weeks, NASA had said in a statement at the time.

Provided Ingenuity survives the frigid Martian nights to come, where temperatures dip to lows of minus 90 degrees Celsius, the mission team will proceed with the first flight of an aircraft on another world. If Ingenuity manages to land successfully and remain operable, NASA may send four successors, “each building on the success of the last”, the agency said.

These descendants of the Ingenuity rotorcraft can bring an aerial dimension to exploration of Mars.

With inputs from the Associated Press.

2022 was the year of Koo, India’s own social media platform. Where is the platform headed in 2023?- Technology News, FP