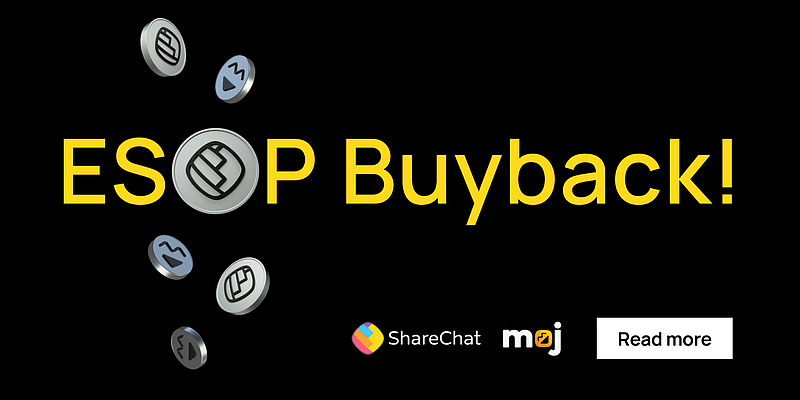 In an announcement, Ankush Sachdeva, Co-founder and CEO, of ShareChat and Moj said,

“In the 6 years of building ShareChat and Moj, we have had many significant milestones but the one I am sharing today is the most satisfying of them all… It gives me immense joy to see a lot of us who joined very early, being rewarded handsomely for the risk they took by joining a young startup.”

ShareChat said it has made changes to its ESOP policy in the past three months to make it even more rewarding. The changes include reducing the price to exercise a stock option to Re 1, as well as vested stock options of former employees remaining valid with no expiry time constraint.

The startup, which also announced that it will “continue to do such buybacks in the future”, recently turned unicorn after raising $502 million in its latest round led by Lightspeed Ventures and Tiger Global, along with participation from Snap Inc, Twitter, and India Quotient, among others.

ShareChat had said it will use the fresh funds to grow its user base and build a world-class organisation. It is also looking to strengthen its creator community, AI-powered recommendation engine, and platform health.

Founded in 2015, Mohalla Tech has raised over $766 million across six fundraising rounds. It launched short video platform Moj in July 2020, shortly after ByteDance’s TikTok app was banned in India.

How real-time interactivity will drive the future of applications? Experts weigh in

Singapore’s GIC to invest in Aditya Birla Fashion and Retail