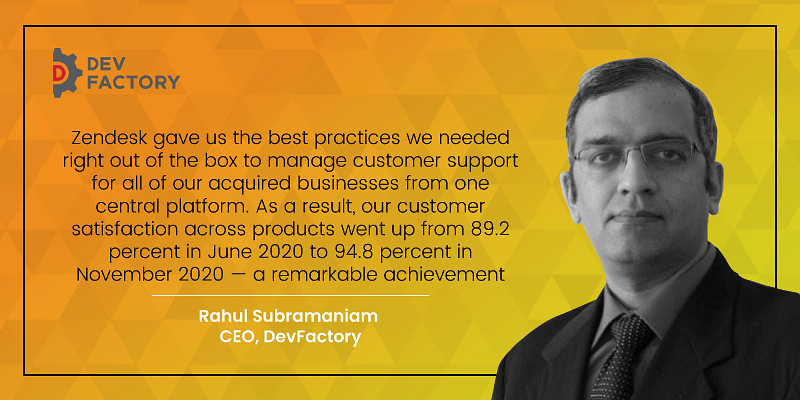 What can IT software services learn from 100-year-old manufacturing principles? A lot, as DevFactory proves. Bringing classic manufacturing techniques like assembly lines, kaizen, kanban, and lean manufacturing into the IT world, DevFactory helps many of the world’s most valuable companies save radically on costs while delivering high-quality experiences.

DevFactory’s portfolio includes all sizes of businesses, with customers from small ventures to Fortune 500 and Global 2,000 companies. Scale and standardisation is at the heart of its operating model; 5,000 remote personnel around the world power the company’s success. “We are the engine that defines and operates the new-age, 100 percent remote operating model that’s all about standardisation and simple, uniform processes,” says Rahul Subramaniam, CEO of DevFactory. “We’re inspired a lot by the manufacturing industry, which is all about consistent quality and doing things the same way.”

Its customer query resolution requires the same systematic approach if the support team wants to improve over time—which is where Zendesk comes in.

DevFactory started looking for a unified support platform that would allow it to build better customer relationships in 2018. Each of the companies it acquired had its customised support platforms, and interviews with customers revealed that those platforms were not performing as well as expected. It became clear that DevFactory needed one central customer support solution with uniform processes and metrics.

According to Subramaniam, DevFactory’s objective was to start using standardised processes and best practices right away, which is why Zendesk is an ideal choice. “As a market leader in customer support, Zendesk had best practices and templates in place that we could use right out of the box,” he says. “We didn’t want to reinvent the wheel— we just wanted to start improving.”

DevFactory and Zendesk partnered to quickly and easily implement a customer support platform and team that fit DevFactory’s needs. Zendesk helped the customer service team identify a set of metrics it could use to measure performance, which were also integrated into a support dashboard. The metrics were divided into weekly, monthly, and quarterly indicators, enabling the team to consistently track its performance.

The team consists of three support levels, ranging from L1 (the most basic), to L3, which sometimes calls on the tech team to assist with query resolutions. With the help of Zendesk’s recommended metrics, employees at each of those levels now understand how they can deliver the high-quality service customers expect.

Since then, DevFactory’s customer support has transformed entirely from an ad hoc operation to one that is highly streamlined and goal-focused. That includes making sure the content in its knowledge base is useful for agents and customers. “Earlier, our deflection rates were less than ideal as the quality of our knowledge content was below par. Now, we have new tools in place to check for content quality right at the source when someone submits an article,” Subramaniam says. “This helps the support team deliver consistent quality service and have productive conversations with customers promptly.”

In 2019, a series of acquisitions by DevFactory led to an almost three-fold increase in ticket volume. To help stay on top of this, the team invested in self-service with the help of Zendesk Guide to encourage customers to help themselves. With a robust help center that covered an extensive range of products—90 of them and counting—the team’s continued investments in enhancing its self-service capabilities reaped benefits with quicker resolution times and a 178 percent increase in help center views over the course of two years.

Another testament to DevFactory’s efforts was the fact that the self-service ratio—the ratio of help center views to tickets raised—more than doubled from 9:1 to 20:1 over the same period. That means more people were finding answers within the help center than those who logged tickets.

Over just five months in 2020, DevFactory’s CSAT score increased from 89.2 percent to 94.8 percent. One of the factors that enabled this was a focus on self-service—the investment in self-service was designed to encourage faster resolution times and better customer experiences.

Looking ahead, DevFactory’s goal is to streamline and standardize its business model and processes even further so it can easily onboard and integrate the support teams of newly-acquired companies. That is a major step towards DevFactory’s vision of being an example of how businesses can and should operate. “We are trying to create a no-exception operating model where we take all the decisions centrally about operations across our organisation,” says Subramaniam. “That gives us economies of scale we wouldn’t have gotten otherwise.”

UPI Was Easier To Implement Than ONDC: Jefferies

Diversity, inclusion, leadership – 25 quotes and tips from the Women on a Mission Summit 2022