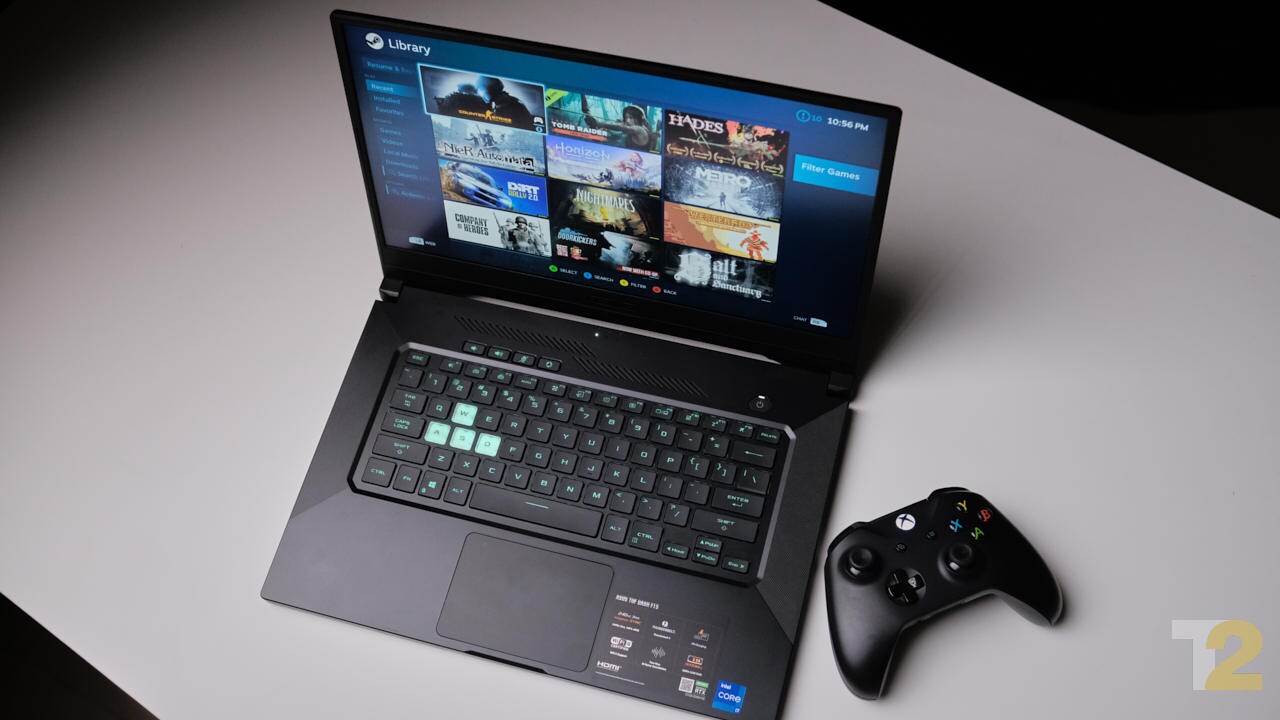 Where other gaming laptops are about pushing the limits of performance and extracting every last frame from the GPU, the TUF Dash F15 is unusual in that it doesn’t strive for any of that.

Rather than compete in a race for raw performance numbers, with the Tuf Dash F15, Asus has taken a step back and focussed on the user experience instead. As a PC nerd who operates a water-cooled gaming rig – that’s been carefully tuned over many weeks to deliver the maximum possible performance from the hardware – I initially found Asus’ approach jarring. After spending a couple of weeks with the device, however, I think it’s very smart.

You get a decent selection of ports, including Thunderbolt 3 and a full size Ethernet jack. Two additional USB-A ports can be found on the other side. Image: Anirudh Regidi

The RTX 3070 GPU here isn’t operating at its peak performance capability. Instead, it’s operating in a reduced power 80+5 W mode (vs the 115+15 W mode that it can operate in, given adequate cooling): as a rule of thumb, the higher the wattage, the better the performance. The ‘+5’ and “+15” indicate additional power that can be delivered to the GPU to boost performance under some circumstances.

This lower power mode is necessary because the F15 is a slim and light gaming laptop with limited room for cooling. Given that the TUF is part of Asus’ mainstream line of gaming laptops, it’s missing exotic features like the liquid metal cooling you’ll find in its premium ROG Zephyrus line, further restricting thermal performance.

In effect, the thermal and power limitations translate to lower performance when compared to older platforms like the Zephyrus Duo, which is packing an older RTX 2070 Super GPU. This sounds like a problem, but it isn’t.

The F15’s RTX 3070 might be forced to run in a reduced power state, but the sheer graphical grunt of the newer GPU architecture helps it hold its own against the more power-hungry GPUs in older laptops.

The performance difference between the two platforms is a handful of percentage points at best, and when playing games, you’re not going to be able to tell 100 fps apart from 115 fps. In most games, barring the demanding Metro Exodus at max settings, the laptop easily pushed 60+ fps at 1080p. eSports titles like CS: GO and DOTA 2 will easily hit 200+ fps. To top it off, lower heat generation means that the fans on the F15 don’t get very loud when gaming.

For a laptop that goes for half the price of the Zephyrus S15 and Duo, that’s not bad at all.

The design is great

The laptop is well designed and sturdily built. You get a backlit keyboard with great travel, a decent trackpad that you’ll never use, and good speakers. With a colour gamut of 92 percent sRGB, a contrast ratio of 1100:1, a peak brightness of over 320 nits, and a 240 Hz refresh rate, the display is particularly good. If you’re heavily into CS, Overwatch, Rainbow Six and the like, this is the ideal display for you.

Verdict: Why bother with a premium laptop?

Until now, the Zephyrus S15 and Duo were my favourite gaming laptops. They’re expensive, but offer premium specs, exceptional performance, and top-of-the-line hardware, features that I thought justified the price (Rs 2.5 lakh). After playing with the TUF Dash 15, I don’t think that’s true anymore.

At Rs 1.4 lakh, the TUF Dash F15 is nearly half the price of the Zephyrus Duo and S15, while offering nearly the same performance, a better display, quieter fans, and louder speakers. ASUS is giving its own premium line of gaming laptops a run for their money, and I couldn’t be happier.