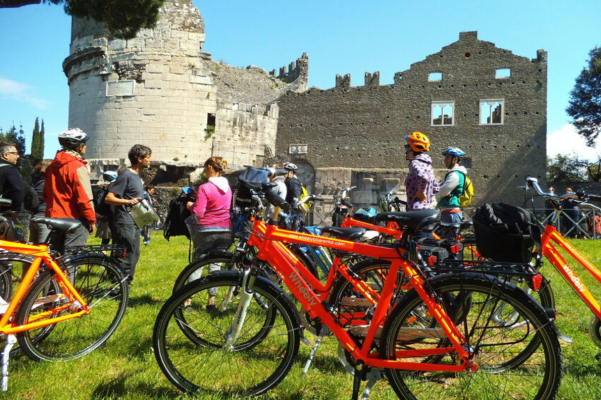 Many countries hit hard by COVID-19 are beginning to see a glimmer of optimism from the arrival of vaccinations. Now, a promising travel startup that saw its growth arrested by the arrival and persistence of the pandemic is announcing a $97 million financing facility to help it stay the course until it can finally resume normal business.

GetYourGuide, the Berlin startup that curates, organizes and lets travelers and others book tours and other experiences, has secured a revolving credit facility of €80 million ($97 million at current rates). The financing is being led by UniCredit, with CitiGroup, Silicon Valley Bank, Deutsche Bank and KfW also participating.

CFO Nils Chrestin said in an interview that the funding will let GetYourGuide come “sprinting out of the gates” when consumers are in a better position to enjoy travel experiences again.

The capital could be used potentially for normal business expenses, for acquisitions or investments, or other strategic initiatives, such as more investment into the company’s in-house Originals tour operations or new services to book last-minute experiences, he added.

And even if a lot of tourism has really slowed down, there are still people taking short-distance trips or buying activities in the cities where they live (and are not leaving). While some metro areas like London are essentially only open for booking well in advance (when the hope is lockdown restrictions might be eased); other cities like Rome and Amsterdam have activities available for booking today.

GetYourGuide’s latest financing news underscores how some startups — specifically those whose business models have not lent themselves well to pandemic living — are getting more creative with their approaches to staying afloat.

GetYourGuide has raised more than $600 million in equity capital since 2009, with its Series E of $484 million in 2019 (before the pandemic) valuing it at well over $1 billion.

But more recently, the startup backed by the likes of SoftBank, Temasek, Lakestar and others has been shoring up its position with alternative forms of finance.

In October, GetYourGuide closed a convertible note of $133 million. While it has yet to raise the equity round that would covert that note — it could be up to 18 months before another equity round is closed, CEO and co-founder Johannes Reck told me at the time — this latest revolving debt facility is giving the startup another efficient route to accessing money.

Unlike equity rounds (or notes that can convert into equity), revolving debt facilities are non-dilutive, flexible lines of credit, where companies can quickly draw down funds as needed up to the full value of the facility. After repaying with interest, they can re-draw up to the same limit again.

In that regard, revolving debt facilities are not unlike credit cards for consumers, and, similarly, they are a sign of how banks rate GetYourGuide, and perhaps the travel industry more generally, as strong candidates for paying back, and eventually bouncing back.

“We are very happy to help GetYourGuide continue its growth trajectory during this extraordinary situation that we find ourselves in”, says Jan Kupfer, head of corporate and investment banking, Germany, at UniCredit, in a statement. “The successful financing also shows once again our unique tech advisory approach, where we combine our deep tech expertise with the broad product range of a pan-European commercial bank.”

“Extraordinary situation” is perhaps an understatement for the rough year that travel businesses have had.

There do remain parts of the industry that have yet to make the leap to digital platforms — experiences, the focus of GetYourGuide, is very much one of them — and that makes for very interesting and potentially big businesses.

But between government-imposed travel restrictions, and people reluctant to venture far, or mix and mingle with others, startups like GetYourGuide have essentially found themselves treading water until things get moving again.

Last October, GetYourGuide said it had passed 45 million ticket sales in aggregate on its platform, but that figure was only up by 5 million in 10 months. As we pointed out at the time, that speaks both to a major slowdown in growth and to the struggles that companies like it are facing, and it is very likely far from the projections the startup had originally made for its expansion before the pandemic hit.

It’s not the only one: air travel, hotels and other sectors that fall into the travel and tourism industries have largely been stagnating or in freefall or decline this year. Many believe that those who will be left standing after all of this will have to collectively brace themselves for potentially years of financial turmoil to come back from it.

Interestingly, Airbnb presents an alternative reality, at least for the moment. It appears to have captured investors’ attention and since going public in December has been on a steady upswing.

Analysts may say that there hasn’t been a lot of news coming out about the company to merit that rise, but one explanation has been that the optimism has more to do with its longer-term potential and for how tech-savvy routes to filling travel needs will indeed be the services that people will use before the rest.

That could be part of the pitch for GetYouGuide, too. Chrestin said that the company believes that travel in the U.S. market, a key region for the startup, is looking like it might rebound in Q2 or Q3. Yet even if it doesn’t, the company has the runway to wait longer.

Chrestin noted that GetYourGuide has “reinvented internal processes” and is operating much more efficiently now. “If it weren’t for the global hardship this crisis is causing, we would look back and say it was quite transformational,” he said.

“The company is very well capitalized and fully funded to profitability. Even if the current travel volume stayed like this for three years, we would not run out of capital,” he continued. “We have sufficient capital even for that scenario, but we don’t think that will happen.”

D2C Tobacco Brand Hash Gets Funding From Amrac Investment, Others

Multiplayer fintech, and the muddled world of startup data – TechCrunch