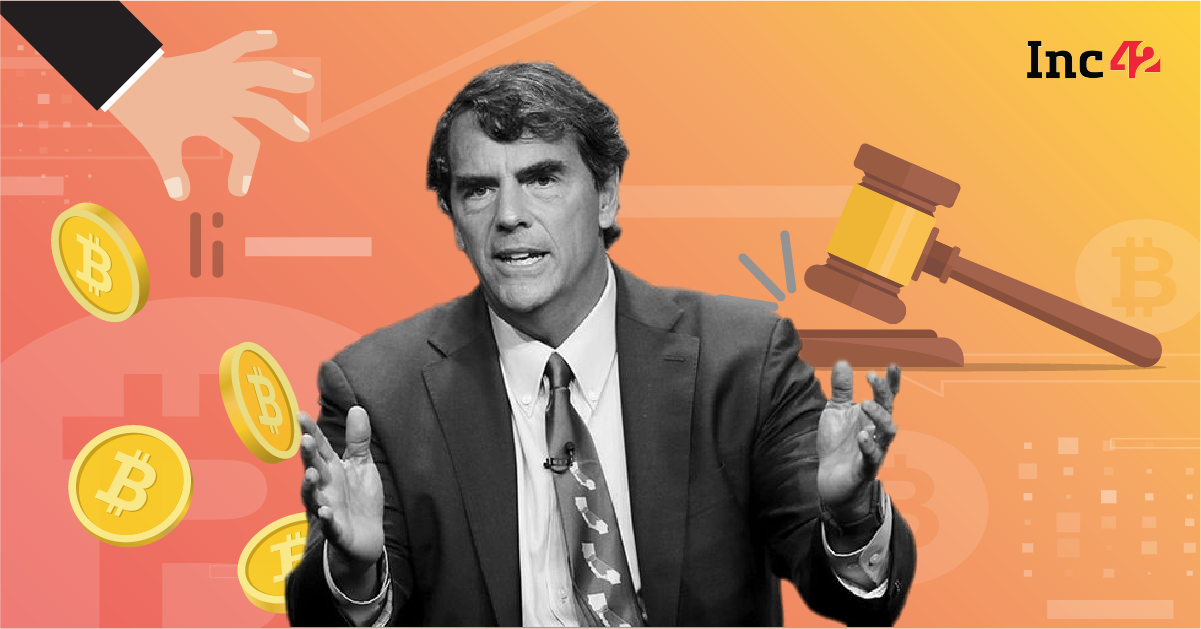 The Indian government regulates and taxes at the peril of their people (at least those people who remain in India), said billionaire Tim Draper on 30% crypto tax imposition

“I have far greater doubts about the long-term viability of the dollar or the rupee,” said Draper on crypto volatility issues

Billionaire and venture capitalist Tim Draper is no longer actively looking to invest in the Indian crypto ecosystem. Speaking about his plans for investing in Indian crypto startups, Draper, during an interaction with Inc42, said, “I will walk cautiously until the Indian government comes to its senses.”

But what made Draper, who was looking to invest in India, change his plans. Was it the latest crypto tax imposed by the government? “Of course,” he said.

For the uninitiated, the Indian government has imposed a 30% tax on income from crypto and 1% TDS on crypto transactions. The crypto community has been calling for a reduction in this tax rate to 18% from 30% and on TDS to 0.1-0.5%.

Besides, the Indian government released further clarifications on the crypto tax on Mar 21, 2022 which further added to the worries of the crypto community:

Commenting on the taxation issue in India, Tim Draper said, “Regulations smoothen the innovations. High taxes repel investors from a jurisdiction. The Indian government regulates and taxes at the peril of their people (at least those people who remain in India).”

Draper, who is the founding partner of Draper Fisher Jurvetson (DFJ), Draper Associates, and the founder of Draper Venture Network and Draper University, has invested in dozens of Indian startups, including crypto exchange Unocoin, HealthifyMe, Unacademy, IndiaGold, Instamojo, Purplle, among others. He is often at loggerheads with the Indian government over the disparity in various startup-related policies.

After the draft of ‘Banning of Cryptocurrency & Regulation of Official Digital Currency Bill, 2019’ was leaked in public, Draper had told Inc42 that it would set India back by 40 years. He also went on to write an open letter to the Indian government, saying that “the recipe for governance that leads to prosperity is not that complicated. It is: freedom, fairness, and frictionlessness”.

Have Greater Doubts About Dollar And Rupee: Draper

After the fall in their values in 2018, cryptocurrencies are currently seeing another big cycle of correction, with Bitcoin and other major virtual currencies falling by about 60%. Bitcoin, which traded at up to $70K in 2021, currently stands at $30K.

However, the disquiet and discomfort suddenly increased when stablecoin Terra USD (UST), which is pegged to US dollar (USD), fell from $1 on May 9 to $0.15 on May 13.

Regardless of the volatility of cryptocurrencies like Bitcoin and Ether, stablecoins are backed by certain assets and are therefore supposed to maintain their values with room for little fluctuations.

UST broke that code of trust for crypto traders and investors.

Speaking on the LUNA fiasco, Tim Draper explained that LUNA uniquely seems to have a limit to the protection offered by it. Most stablecoins are supported by a parallel token that dilutes as far as it needs to make the holder whole.

However, when asked if he thinks that the LUNA episode has further increased people’s doubts about crypto, Draper said,

“I have far greater doubts about the long-term viability of the dollar or the rupee,” Tim Draper

Tesla CEO Elon Musk recently offered to acquire Twitter at $44 Bn. While the deal got approval from the Twitter board, Musk has put the deal on hold currently pending details about the microblogging site’s claim that spam accounts form less than 5% of its user base.

However, former Coinbase CTO and investor Balaji Srinivasan and some others have suggested that decentralising Twitter into a Web3 protocol where users own private keys will help make the social media free.

On this, Tim Draper asserted that unstoppable domains already provide free speech and users can use their own private keys.

Supporting Musk and Twitter co-founder Jack Dorsey, Draper concluded, “I love Elon and Jack. They both want free speech. They abhor the idea that any platform would be the arbiter of what is acceptable.”

6 Types of Budgets and How to Choose

The Fundamental Reasons behind Corrupted Outlook