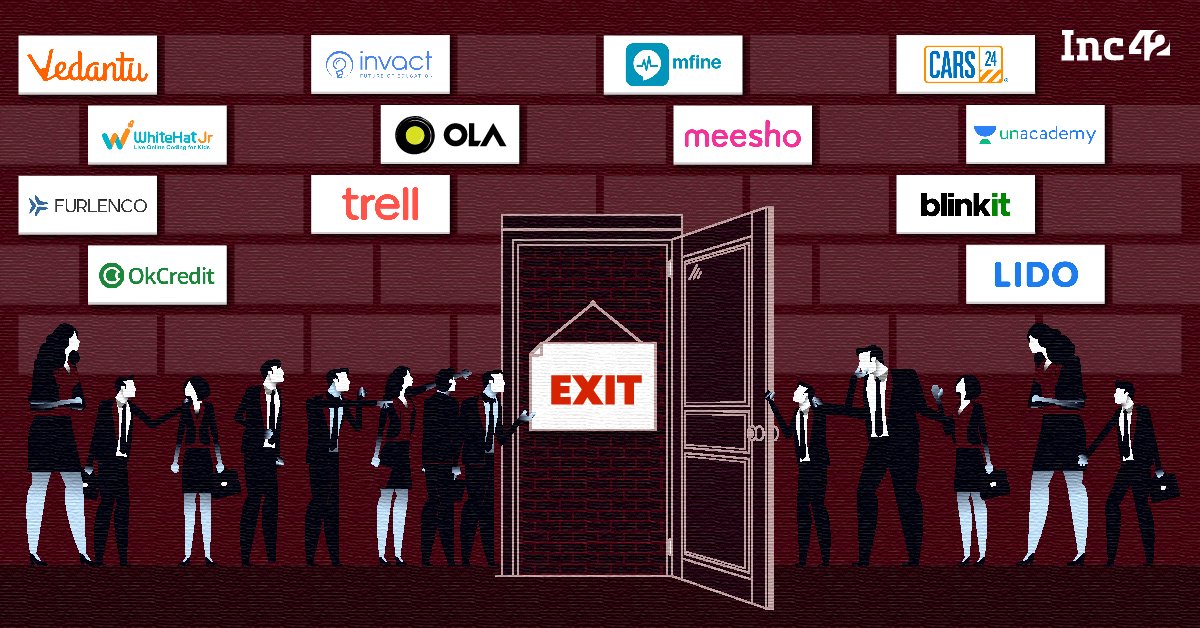 So far, 8,364 employees have been laid off by 13 startups, which includes unicorns such as Vedantu, Cars24, Ola, Meesho and Unacademy

Amid fears of a funding winter, marquee investors such as KKR, Sequoia and Y Combinator have shared surviving strategies with startup founders

As the alarm bells ring, here are the startups that issued pink slips in 2022

The year 2022 did not start well for the larger economic world, as a global sell-off pressure prompted a stock market crash earlier this month.

This has consequently seen startup funding slow down to a trickle. The first quarter of the year saw Indian startups rake in $11.7 Bn in funding, minting 13 unicorns in the process.

However, April only saw about $2.6 Bn in funding with no unicorns being produced. While May saw the minting of India’s 100th unicorn, it has been a slow month in terms of funding, with only $3.1 Bn brought in.

Therefore, during the first five months of 2022, India has seen $17.4 Bn in startup funding. During the same time last year, Indian startups brought in $8.2 Bn in funding. While the funding amount is surely more than last year, the momentum that was achieved towards the end of 2021 looks to have fizzled out.

This has prompted marquee venture capital firms such as Sequoia, KKR and Y Combinator to sound alarm bells, instructing the startups in their portfolios on how to survive. Among all of the fancy words, there is a clear message: cut costs and increase runway.

Many of these startups seem to have interpreted that as a license to fire people as a “cost-cutting exercise”, disrupting thousands of livelihoods in the process.

So far, 8,364 employees have been laid off by 13 Indian startups, which include unicorns such as Cars24, Ola, Meesho, Trell, Unacademy and Vedantu.

As the startup ecosystem braces for a funding winter and subsequent slowdown, Inc42 has compiled the Indian Startup Layoff Tracker to track the layoffs that have taken place so far in 2022.

If you would like to report a layoff, pay cut etc. at a startup, write to us at [email protected]

May 24 | Invact Metaversity Crashes; Lays Off 66% Of Workforce

Invact Metaversity, founded by ex-Twitter India head Manish Maheshwari, started as a promising edtech startup, offering a 16-week MBA alternative for around INR 2 Lakh. The first course was supposed to start on May 12.

However, even before anything like that, the Metaversity is all but closed up, having laid off 20 out of the 30 employees that were working from the Bengaluru office. Maheshwari had announced his plans in December 2021 and the startup had raised more than $5 Mn from some of India’s biggest angel investors.

Even so, Metaversity’s fall from grace has come as little surprise, as the founders struggled to find the right product and the right approach. The startup lacked a shared vision among the leadership.

Last evening, Metaversity said that Maheshwari has stepped down from his position as CEO.

In what proved to be another example of apathy of a startup, healthtech startup MFine fired almost 75% of its workforce citing financial difficulties.

However, the writing was already on the wall for MFine. The company had reported a loss after tax worth INR 102.7 Cr in FY21, as it spent INR 116 Cr to make INR 12.9 Cr. According to an ex-employee, MFine had already been firing people in small batches since October 2021.

Entire teams were laid off in the process, which triggered protests against the startup as 100 former employees gathered outside MFine’s Bengaluru office. The protestors demanded the rollout of the full May salary along with an early release of their full & final payment.

However, not only did MFine not let Inc42 enter the office, it did not allow female ex-employees, which included a pregnant woman, to use the restroom.

Used car unicorn Cars24 also joined the list of startups that have laid employees off. Mostly laying off across lower divisions, Cars24 cited automating operations and cutting costs as the two reasons for laying off 7% of its total workforce.

On the other hand, the unicorn has raised $950 Mn across its lifetime. These layoffs come five months after it raised $400 Mn at a valuation of $3.3 Bn. Speaking on the layoffs, a Cars24 spokesperson told Inc42, “This is business as usual – performance-linked exits that happen every year.”

The startup is looking for an IPO over the next 18-24 months, joining the list of Indian startups that are waiting for the storm to pass to go for a public listing.

Edtech startup Vedantu laid off a combined 624 employees across two layoffs within a span of 15 days, citing cost restructuring as the primary reason.

First, Inc42 exclusively reported that the edtech startup laid off 200 employees. The edtech startup said that it will be hiring around 1,000 people in the coming months. However, two weeks in, Vedantu conducted another layoff, this time firing 424 employees.

The startup has conducted the layoffs after it achieved the unicorn tag last year after raising $100 Mn in funding. A blog post by CEO Vamsi Krishna showed that the startup will extend health benefits for laid-off employees and their families till August 5, 2022.

In a strange and probably the first case of its kind, Indian startup WhiteHat Jr asked its remote employees to either join offices or hand in their resignations. Inc42 had exclusively reported the resignations of 800 employees, however, after publishing the story several employees reached out, claiming the number to be more than 1,000.

According to ex-employees, this was a layoff in disguise. Interestingly, Inc42 learnt that if an employee is based out of Gurugram, they were not allowed to join WhiteHat Jr’s Gurugram’s office, but the Bengaluru office for a similar job role.

The edtech startup’s soft layoffs have triggered the debate between working remotely and working from the office as more and more companies are asking their employees to join. However, WhiteHat Jr gave the employees no choice at all.

After going bullish on quick commerce twice before, Bhavish Aggarwal-led Ola’s quick commerce arm Ola Dash went for restructuring its entire business, which resulted in the unicorn laying off around 2,100 dark store workers. Ola ended the contracts of these workers who were hired to man its 200 dark stores.

In terms of its dark stores, Ola has reportedly scaled down half of them and may even shut a few of them down. The unicorn had run into regulator challenges with bringing in its $500 Mn term loan from foreign lenders and that had prompted the scale back.

However, doing a 180 recently, Ola has announced that it will go for quick commerce again, scaling down its food delivery operations this time around. This means that laying off those 2,100 people meant nothing, as the company tries hard to pivot away from its core business of cab aggregation.

The ecommerce unicorn Meesho laid off 150 employees, saying that it is restructuring Meesho Superstore which has impacted the said number of employees.

Meesho said, “As we look to boost efficiencies in the light of the integration, a small number of full-time roles and certain third-party positions on six-month contracts at Meesho Superstore were reassessed to remove redundancies with the core business.”

The layoffs happened less than seven months after the unicorn raised $570 Mn in funding. The ecommerce and social commerce unicorn tried its hands at grocery delivery with a pilot project in Karnataka less than nine months ago. It had plans to expand to Tier 2+ cities, but it has had to scale back following limited success.

For edtech unicorn Unacademy’s employees, it was an April to forget as the company fired around 1,000 employees, teachers and consultants from its core team and its PrepLadder team.

In late March, Inc42 first reported that in a cost-cutting exercise, the edtech startup had laid off more than 125 consultants from its PrepLadder team. PrepLadder, which was acquired by Unacademy in July 2020 for $50 Mn, gives students material for competitive exams such as IIT/JEE, NEET and so on.

Around the same time, Unacademy laid off more than 200 teachers in a cost restructuring exercise. Inc42 exclusively reported that the edtech unicorn fired the educators based on their poor performance.

In early April, the startup laid teachers off again, this time firing 600 teachers. The layoffs, according to a company spokesperson, were based on several assessments to determine the performance.

Furniture startup Furlenco laid off around 180 employees to cut costs and achieve profitability ahead of a public offering, according to several employees Inc42 spoke to.

Around 95% of the employees let go were in customer-facing roles which include customer support and other similar roles. The startup claims to have extended medical coverage for the impacted employees, which constitute almost a third of the startup’s total workforce.

The layoffs come as the company had raised $165 Mn in funding last year alone, including a $24 Mn funding round in February 2022 itself.

March 14 | Trell Lays Off Half Of Its Workforce To Extend Runway, Cut Costs

Bengaluru-based social commerce platform Trell laid off 300 employees after the company’s founders were alleged of financial irregularities and the company saw its $100 Mn funding round fall through.

The layoffs were cited to be an exercise to cut costs and extend its runway as Trell looked to survive. The company incurred a loss of 78.4 Cr in FY21. This is an almost 550% increase from INR 12.07 Cr that it had incurred in FY20.

Quick commerce startup Blinkit reportedly laid off employees across major cities including Mumbai, Hyderabad and Kolkata. The layoffs impacted close to 5% of Blinkit’s overall workforce, which amounts to around 1,600 people, including riders, pickers and store managers.

The layoffs came on the heels of Zomato investing $150 Mn in the cash-strapped company, which had also picked up a loan of $10 Mn from Innoven Capital.

Blinkit has had to cut back after reportedly splurging INR 600 Cr on expanding its business last year between November and February. The deep discounting tactics backfired and the startup cut costs and corners to reduce its cash burn by firing employees.

Bengaluru-based bookkeeping startup OkCredit laid off 40 employees or around 35% of its total workforce. Most of these layoffs were from the backend, tech and engineering teams.

The Tiger Global and Lightening-backed startup said that it is focusing on its fintech initiatives and strengthening its growth channels, which has resulted in the startup laying off the said employees. OkCredit said that the laid off employees were being supported by outplacement services and extended medical insurance.

In FY21, the startup spent INR 114.6 Cr, to earn a mere INR 3.79 Lakh in sales revenue, forming another possible reason for the layoffs.

Edtech startup Lido’s founder Sahil Sheth, during a virtual town hall, told the company employees that they were in a financial crunch. Following this, the company asked 150+ employees to submit their resignation as it looked to raise funds or possible acquisition of Lido.

The company assured these employees that they would be paid the pending salaries for January 2022 and the 1st week of February 2022 within ’30 to 90 days’, but to date, their salaries are pending, which has prompted them to take the fight to social media.

Since its launch in 2019, Lido Learning has raised close to $24 Mn in funding. The layoff had come only six months after it raised $10 Mn from Ronnie Screwvala’s Unilazer Ventures.

This is a running article. We will add as new information comes in.

If you would like to report a layoff, pay cut etc. at a startup, write to us at [email protected]

3 Industries to Consider for Your Startup