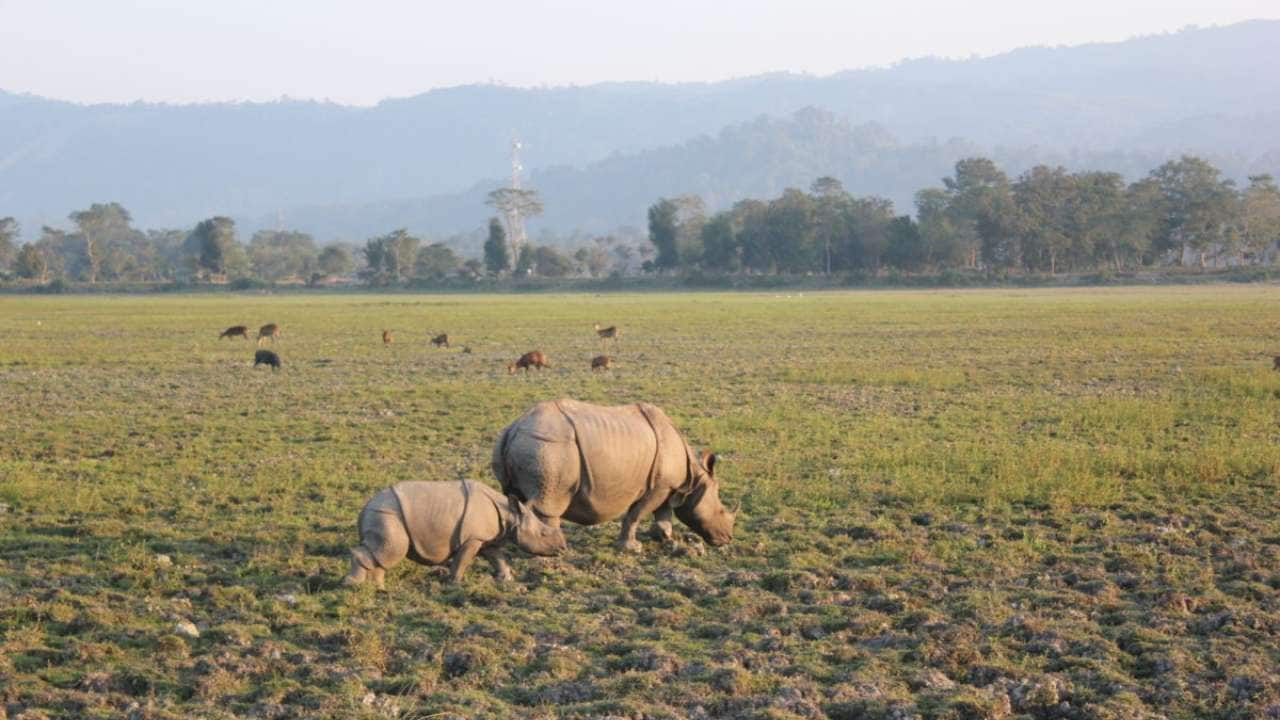 Turn the clock back in time 50,000 years and you would have seen two species of giant prehistoric elephants (Palaeoloxodon namadicus and Stegodon namadicus), a hippopotamus, Hexaprotodon sp., and a zebra-like horse, Equus namadicus, alongside other great beasts that roamed the Indian subcontinent. Modern humans had arrived by then on the Indian subcontinent from Africa but these four large mammals stuck around in the region for at least 20,000 years after their arrival. A low-magnitude extinction began about 30,000 years ago when some megafaunal species, such as the giant elephants, hippopotamus and zebra-like horse, started disappearing. This is in contrast to the Americas, Europe and Australia where the arrival of humans (Homo sapiens) have been implicated in more rapid, large scale megafauna extinctions such as those of woolly mammoths and sabre-toothed tigers. These extinctions took place during a geologic period called Late Quaternary (from ~50,000 years onwards) when around one hundred genera of large-bodied terrestrial vertebrates disappeared across every continent except Antarctica.

In the Indian subcontinent, however, H. sapiens seem to have had a very limited impact: megafauna proved “more resilient” and, as in Africa, have coexisted with humans for much longer periods than in other regions. The persistence of megafauna is linked to the long coexistence with Homo sapiens and other human ancestors said scientists in a recent study.

Shedding light on the enigma of megafaunal extinctions in the Indian subcontinent, a region understudied in most megafaunal extinction studies, scientists documented the pattern of extinction in the region based on a novel dataset drawn from 51 fossil sites in present-day India where 114 species of mammals, survive under intense anthropogenic pressures. The study documents four mammalian extinctions — P. namadicus, S. namadicus, Hexaprotodon sp., and Equus namadicus; the extirpation of ostriches (Struthio camelus); and a pseudo-extinction of Indian aurochs (Bos namadicus).

The analysis provides the first direct and independent test of the “co-evolution hypothesis” that co-evolution with hominins (humans and their relatives) may have increased the resilience of faunas to large scale extinction, and that at least in the Indian Subcontinent, geographic isolation along with abiotic factors may have increased the extinction risk of the victims.

“Co-evolution basically means the evolution of one species in response to another. The idea was proposed by Paul Martin in the 1960s to explain the survival of large mammals in Africa. He argued that because humans evolved in Africa along with the lineages that eventually produced living African mammals, these lineages had evolved strategies to avoid human activities, which would have promoted survival. The evidence for coevolution was always inferential: survival of megafauna in places where Homo sapiens weren’t the only hominin, and we only had a sample size of one, i.e., Africa,” explained Advait Jukar at the Department of Anthropology, Yale University, and the study’s lead author.

“Our study in India provides direct evidence of this pattern outside Africa because multiple species of humans lived in India from at least 1.7 million years ago, and we have lots of surviving large mammals,” Jukar told Mongabay-India.

The 114 mammals that are found in India today had ancestors either in India or elsewhere, likely hundreds of thousands to millions of years ago, but in all likelihood, these animals were in their “modern” avatar between 100,000 years ago and today, he observed. However, not all large mammals on the Indian subcontinent survived.

“Four mammal species (P. namadicus, S. namadicus, Hexaprotodon sp., and Equus namadicus) go extinct in India, and as a consequence, globally since they were only found in India. Bos namadicus represents a pseudo-extinction because this species was domesticated in India as Bos indicus, the living zebu cattle. Theropithecus cf. T. gelada represents an older extirpation since this species is still found in East Africa. Similarly, ostriches were also extirpated, which means that they went extinct locally in India, but survive elsewhere on the planet,” he added.

Pinpointing a singular cause to any extinct is challenging, if not impossible. “What we can say is that had humans not showed up, these four species which we lost in India, would have likely still been around today. The extirpation of the ostriches is likely also human-driven. People used ostrich eggshells for various purposes, and if you remove the eggs, you remove a future generation, eventually leading to a population collapse,” Jukar added.

Vertebrate palaeontologist Vijay Sathe of Deccan College Post-Graduate and Research Institute (Deemed University) who was not associated with the study but is a co-author of the review paper advises caution about concluding fossil populations as none of these is easily decipherable. “The major extinction events like 1st to 5th are scientifically proven and well documented. It is only concerning the Late Quaternary when the story is blurred by limited data and the fossil record that confirms their extinction from the subcontinent,” Sathe told Mongabay-India.

“While some of the large mammals have disappeared towards the end of the Pleistocene (earlier and major of the two epochs that constitute the Quaternary Period), some appear to have continued but in the domestic form (such as cattle, buffaloes), implying that humans domesticated their ancestors,” he observed.

Referring to the specific knowledge gaps in understanding of megafauna extinction in the Indian subcontinent, Sathe explained that more absolute dates are needed on the last recorded occurrence of the taxa.

“The Last Datum of appearance (LAD) for three genera of proboscideans, hippos, ostriches coincides with the end of the Pleistocene. However, more absolute dates for their exit are awaited and so are the data for climatic proxies on the regional versus pan Indian scale. The perspectives on diet, its supposed change through time or health status through biochemical
signatures are fast emerging but its relation to the actual event(s) of extinction is far from satisfactory.”

“Hunting by humans or humans as a major factor driving them to extinction awaits a better set of evidence to validate it. However, the early man was by all means driving source of energy from animal meat by hunting them is a matter of common sense but its actual evidence in the fossil record is mostly absent,” he said.

The extinction of four mammalian species in the Indian subcontinent reported in the study represents a loss of around four percent of terrestrial mammals and 20 percent of mammals weighing greater than 50 kg. “While 1 in 5 species weighing over 50 kg went extinct, this is still lower than what we see in parts of the world like the Americas or Australia,” noted Jukar.

The researchers note that many of the species that survived had distributions that extended either from West Asia through South Asia, or from South Asia through S. E. Asia. “Studies have shown that extinction risk (chances of going extinct) increase when a species occupies a small region, for example, species that only live on a particular mountain. If a species is more widely distributed, then a disturbance in one part of its range won’t threaten the entire species, even if local populations go extinct. So, if a population would disappear in India, it could be replaced by populations from elsewhere. The extinct species were only found in India, so when they disappeared, members of the same species weren’t around to replace them from elsewhere,” elaborated Jukar. According to study author Advait Jukar the sixth extinction started with the extinction of these large animals, sometime around 50,000 years ago. Photo courtesy Advait Jukar.

Referring to abiotic factors (such as harsh environmental conditions like droughts), Jukar said these conditions stress populations and fragment ranges, resulting in inbreeding within smaller and smaller populations. “This further makes species more vulnerable to extinction. While these factors increased extinction risk, I don’t think they would have gone extinct without the increasing pressure from humans, since they had experienced similar periods of environmental stress at other times in the past,” he said.

Learning from the past could be advantageous in present-day conservation challenges states Vijay Sathe. “Especially, when the megafauna confronts a direct threat from humans for its survival, understanding the means of its conservation and protection becomes a top priority for the survival of our ecosystem. Even though man is a central causative factor for the survival of wildlife today, climate and global warming have their own share in destabilising the survival potential. And climate change or environmental change is a dynamic process that has far-reaching ramifications since times immemorial,” Sathe told Mongabay-India.

Sathe goes on to note that if the present is a key to the past, the past does have potential in explaining the possible impact of the change on animals. “Biochemical proxies such as isotopes, mega and microanatomical features in skeletal tissues as evinced in the fossil record due to climatic and environmental change and genetic signatures can provide a blueprint for the modern species. This may explain how learning from the past, the modern fauna could be saved from the brink of extinction,” said Sathe.

In a 2020 study, scientists said that more than 500 vertebrate species are on the brink of extinction, with populations of fewer than a thousand individuals. According to the authors, the Earth is experiencing its sixth mass extinction, extinction rates accelerating, and human activity is to blame. The authors call the ongoing extinction perhaps “the most serious environmental threat to the persistence of civilisation because it is irreversible.” In 2017, 15,364 scientist signatories from 184 countries warned in a paper that humans had unleashed the sixth mass extinction event “wherein many current life forms could be annihilated or at least committed to extinction by the end of this century.”

Jukar believes that the sixth extinction started with the extinction of these large animals, sometime around 50,000 years ago. “We know that several factors made them more vulnerable to extinction such as slow reproductive rates and climate change-induced environmental change which subsequently led to range fragmentation in unfavourable times, and as a consequence, limited gene flow and inbreeding. These two factors were necessary, but don’t appear to be sufficient to cause an extinction independent of humans. When you add people to the mix, a lot of species get pushed over the edge. This can be caused by hunting, habitat change, habitat encroachment, etc.,” he stressed.

“All of these factors are accelerating today at unprecedented rates. Animals already live in fragments in a sea of humanity. Limited gene flow makes species more vulnerable, especially species who have limited distribution or are slow breeders. This fragmentation also makes species more vulnerable to climate change because they can’t go anywhere. This added with poaching and increased human population pressure is what is causing the extinction crisis of today. What our species may have unknowingly participated in 50,000 years ago, we are active and knowing participants today,” Jukar added.

Mongabay-India is an environmental science and conservation news service. This article has been republished under the Creative Commons licence.