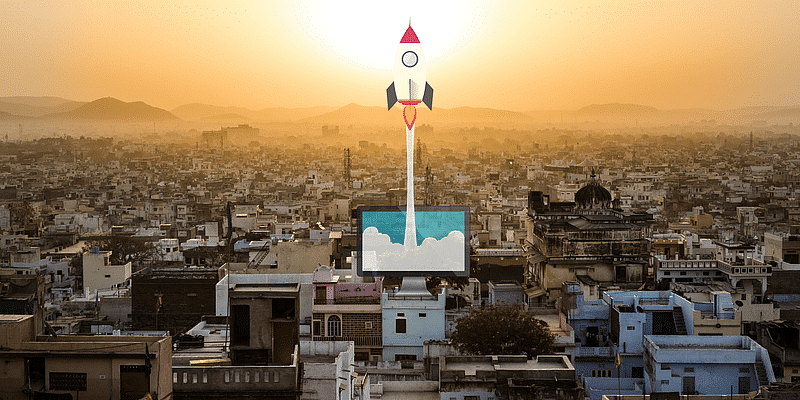 At the start of GoBillion’s journey in 2020, the Co-founder wasn’t travelling much as he, along with his childhood friend and Co-founder Kulapradip Bharali, was trying to establish the startup in Guwahati. Then, there was also the COVID-19 pandemic that made everyone stay on the home turf.

However, as Y Combinator-backed GoBillion found itself on a growth trajectory, the founders had to set up an office in Bengaluru in 2022.

“Yes. This is how it is. I keep oscillating between cities now. But me and my co-founder majorly operate out of Bengaluru. We have also hired many senior folks from Udaan and Zepto, who are based in the city,” Roshan tells YS in an interaction.

Sequoia Surge-backed Minimalist has a similar story. While the skincare digital-first brand did not move its headquarters from Jaipur, its general trade and modern trade head sits in Gurugram.

Mohit Yadav, co-founder of Minimalist, is also a chartered accountant

Surat-based XYXX Apparels, which majorly sells men’s innerwear, also set up an office in Mumbai in 2020.

Yogesh Kabra, the founder of XYXX Apparel, says he chose Mumbai for three reasons: First is the ease of hiring talent to develop branding, marketing, and technology, second is the city’s proximity to Surat and third, handling incoming orders is a relatively smooth process in a metro.

While Surat provided lower input cost, it was hard to sustain a burgeoning business. In the next three months, XYXX Apparels expects sales to reach up to 1 million (10 lakh) units a month.

“Surat was working out for us in the initial years when I was setting up the business. But it is becoming very difficult to attract talent after a certain point,” Yogesh had told YS in an earlier interaction.

The spotlight on Bharat

The year 2021 was considered a period of homecoming for skilled professionals as the COVID-19 pandemic saw talent move back from metros to smaller cities.

New ideas started emerging from smaller towns. Startups in these regions now had the option of either hiring local tech workers or remote talent. The reach of internet services also helped companies manage workload despite lockdowns. The possibilities, it seemed, were endless.

Cities such as Kochi, Indore, Bhopal, Jaipur, and Srinagar, which earlier lacked the tech infrastructure, began buzzing with new activity.

At least half a dozen startups from Tier 2 and 3 cities that YS spoke to say they are reconsidering their plans.

These firms have either moved the headquarters to metro cities, including Gurugram and Bengaluru or have set up bigger offices in a city even if the founders keep operating out of their hometown. “Attracting entry to mid-level talent is easier. They do not have much baggage and can move to any city. But with senior-level folks, they cannot relocate to a new city at the drop of a hat,” says Minimalist’s Co-founder Mohit Yadav.

Back to old normal?

With the relaxation of COVID-19 restrictions, startups that began their journeys in smaller towns have started setting up offices in metros and Tier 1 cities.

Oat Mlk, a Kanpur-headquartered plant-based milk brand, which started selling its products only eight months ago, has started operating in Delhi. While Co-founder Akash Wadhwani works remotely from the capital city, Co-founder Rishabh Gupta holds the fort in Kanpur.

“So far, we were able to do virtual calls and basically everything online. We would fix up multiple meetings in a particular city, stay there for a few days and crack the deal face-to-face. But now, if we want to scale faster we have to be in a city,” OatMlk’s Rishabh told YS in an earlier interaction.

Harshil Mathur and his co-founder Shashank Kumar started Razorpay in Jaipur, after quitting their jobs in the US, in 2014

While the media caught up with Startup Bharat in the past few years, several startups trace their journeys to smaller cities.

The founders of payments solutions provider Razorpay, Shashank Kumar and Harshil Mathur, for example, left their comfortable jobs abroad to move to Jaipur to launch their business in 2014. The idea was to conserve resources.

After completing the Y Combinator programme in the Bay Area and raising a seed round, however, the duo moved to Bengaluru in April 2015.

“Growing beyond a point is not possible in Tier 2 and 3 cities. While hiring can also be solved for, non-metro cities do not have the ecosystem as of now to nurture growing startups,” says Sushil Sharma, Founder, Marwari Catalyst Ventures.

Cities such as Gurugram and Bengaluru attract offices of the top venture capital firms, including Sequoia Capital India, Lightspeed Venture, and Elevation Capital, among others, making it easier for startups to approach investors about fundraises.

These cities also have a bustling startup culture, with frequent founder meetups and accelerator programmes.

Post pandemic, these events have been happening almost every weekend, industry insiders say.

“This kind of get togethers and a culture as a whole, makes it easier for founders to reach out to anyone in case they are stuck with hiring or want to either get acquired or acquire another firm,” says Sushil.

While non-metro cities do have tech talent and founders willing to put in the time, funds, and efforts, a lack of a startup ecosystem pushes founders to have another foot in a metro city.

To counter this lack of culture, Sushil and his team are setting up a co-working space in Jodhpur, which would bring startups from its own accelerator and emerging tech firms, under one roof.

With the 14,000-sq-ft space, the investor aims to attract founders from Udaipur and Jaipur to also hold meet up and networking events in the city.